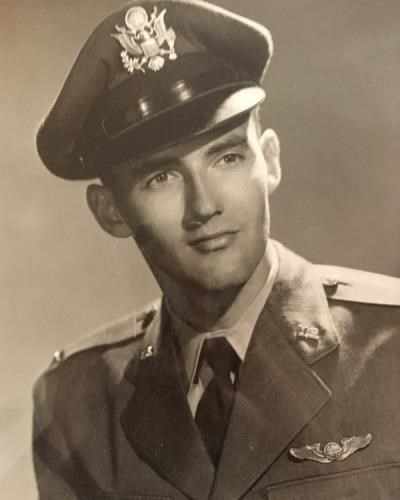 BORN
1928
DIED
2018
FUNERAL HOME
Horan & McConaty - Southwest Denver/Lakewood
3101 South Wadsworth Boulevard
Lakewood, CO
90, passed away at his home surrounded by his family and beloved dog on December 18, 2018. He was born August 14, 1928 in Long Branch, New Jersey to Franklin Dwight Foster and Helen Gregory Fitch. Arthur attended The Lawrenceville School and later Brown University, graduating with a degree in mechanical engineering with Phi Beta Kappa honors. He enlisted in the United States Air Force, and as navigator bombardier with the 452d Bomb Wing, flew 55 combat missions over North Korea in a B-26 tagged "A haulin' Ass". Arthur was awarded the Distinguished Flying Cross as well as The Air Medal for his service, accomplishments which he and his family were always most proud. He was honorably discharged at the rank of 2nd Lieutenant. Arthur returned home to join his father in the family business, Manifold Supply Company, in Brooklyn, NY in 1952. There he met and fell in love with Marilyn Garrett - a stewardess with United Airlines. They married on September 22, 1956 and a few years later moved to Garden City, New York with their three young children. After Manifold Supply Co. was sold in 1968 the family moved to Colorado, realizing Arthur's dream of a life in the country with horses and mountains and wide open spaces. They joined Valley Country Club, introduced the family to alpine skiing, and loved life in the beautiful Colorado outdoors. Arthur was active in the Lions Club of Denver, where he took on a leadership role as head of the board of Savio House, a non-profit organization dedicated to the safety and wellbeing of children and families. He received a Lifetime Achievement Award from Savio House in 1997. Along with his late second wife, Sandra Town, he became an active supporter and advocate for The American Cancer Society, Diabetes, The American Heart Association, The Colorado Ballet, and various animal welfare organizations. Arthur was passionate about dogs (Golden Retrievers and Great Danes), flying (he had his commercial and acrobatic ratings as a private pilot), golf (handicap remains a mystery), the Broncos (as a season ticket holder since 1969), a good martini (Bombay Sapphire), and above all, spending time with his family. Arthur is survived by his three children, JD (Elizabeth) Foster, Karen Foster, and Lynn (David) Eikenberry, eight grandchildren, one great grandchild, and two more on the way. There will be a military service at Ft. Logan National Cemetery on Thursday, January 3rd at noon. Please assemble at staging area "A". A reception will follow.

Published by Denver Post on Dec. 30, 2018.
To plant trees in memory, please visit the Sympathy Store.
MEMORIAL EVENTS
Jan
3
Service
12:00p.m.
Ft. Logan National Cemetery, staging area "A"
CO
Funeral services provided by:
Horan & McConaty - Southwest Denver/Lakewood
MAKE A DONATION
MEMORIES & CONDOLENCES
Sponsored by The Denver Post.
2 Entries
May God bless you and your family in this time of sorrow. Psalm 146:5,9
January 23, 2019
Condolences to the Foster family, your father, grandfather and great grandfather was a great man. Though our time with Arthur was limited over the past 20+ years, we enjoyed every visit, loved his stories and outlook on life. He was truly a wonderful addition to our lives.

A great man who lived a wonderful life will be surely missed.