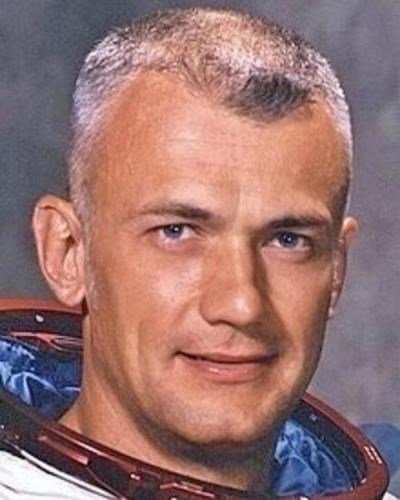 BORN
1937
DIED
2017
FUNERAL HOME
John M. Taylor Funeral Home
147 DUKE OF GLOUCESTER ST
Annapolis, MD
Captain Bruce McCandless II, U.S.N. (Ret.) of Conifer passed away at the age of eighty on December 21, 2017 in Los Angeles. Born on June 8, 1937 in Boston, McCandless graduated from Woodrow Wilson Senior High School in Long Beach, California. He received a Bachelor of Science degree from the United States Naval Academy in 1958, a Master of Science degree in Electrical Engineering from Stanford University in 1965, and an MBA from the University of Houston at Clear Lake City in 1987. Bruce served as a fighter pilot from 1960 to 1964, flying the Skyray and the F-4B Phantom II from the USS FORRESTAL and the USS ENTERPRISE. He subsequently attended Stanford for graduate studies and in April of 1966 was one of nineteen men selected by NASA to join the nation's astronaut corps. He is perhaps best remembered as the subject of a now iconic NASA photograph, flying alongside the space shuttle in the Manned Maneuvering Unit (MMU) - the first astronaut to fly untethered from his spacecraft. His time as an astronaut encompassed much more than that mission, though. Among other highlights, he served as the Mission Control communicator for Neil Armstrong and Buzz Aldrin's moonwalk on the Apollo 11 mission, and participated in the mission that launched the Hubble Space Telescope. Among the awards and honors Bruce received are the Legion of Merit (1988); the Department of Defense Distinguished Service Medal (1985); the NASA Exceptional Service Medal (1974); the American Astronautical Society Victor A. Prather Award (1975 & 1985); the National Aeronautic Association Collier Trophy (1985); and the Smithsonian Institution National Air and Space Museum Trophy (1985). He was also awarded a patent for the design of a tool tethering system that was used during shuttle spacewalks. Bruce's awards and achievements tell only one side of his story. He was a brilliant and inquisitive man who at various times grew fascinated with environmental issues, photography, computer technology, and wildlife rescue, including the care and feeding of injured and orphaned owls, hawks, a loon, and a porcupine. He was intensely proud of his family, of his naval service, and of his many friends, shipmates, and colleagues. He valued creativity and self-reliance, and had no patience with prejudice. He was also a man of faith, and grew in devotion in his later years. In lieu of flowers, his family asks that you consider making a donation to Bruce's favorite local institution, the Denver Museum of Nature & Science. Bruce is survived by his wife, Ellen Shields McCandless of Conifer; his son, Bruce McCandless III of Austin, Texas and wife Patricia; his daughter, Tracy McCandless, of Islamorada, Florida; and grandchildren Emma Rose and Carson Clare McCandless of Austin. He is also survived by two sisters, Sue McCandless and Rosemary V. McCandless, both of Dallas, and a brother, Douglas M. McCandless of Washington, D.C. He would also wish to mention his stepson Steve Shields of Denver, wife Sandra, and children Joshua, Jack, and Samantha; and stepdaughter Mari and husband Erik Johnson of Alma, Nebraska and children Chase, Cody, and Jessica. He was predeceased by his first wife of 53 years, the late Bernice Doyle McCandless. Bruce will be buried at the United States Naval Academy in Annapolis, Maryland on January 16, 2018, with a funeral service commencing at 10:00 a.m. in the Naval Academy Chapel. The family will host a memorial service at the Living Savior Evangelical Lutheran Church, 8050 W. Coal Mine Ave. in Littleton on Saturday, January 20, 2018, at 10 a.m. Friends from Bruce's long residence in the Denver area are invited to honor his memory.