Aaron Dakota Garrett 1981 ~ 2010 Aaron Dakota Garrett, Navajo name Haashk'e Iini Yedilwo'ii,(Warrior Who Runs With Lightning), was born Nov. 1, 1981 in Orem, Ut, died July 24, 2010, in Alpine, Ut. Aaron grew up in Alpine, graduated from Lone Peak High School in 2000, where he excelled academically and in sports, particularly baseball and football. As a youngster he played on the Alpine Little League All-Star team, which went on to win the WBBA Little League World Series. From his freshman through senior years, Aaron played short stop and second base for the Lone Peak High baseball team, highlighted by a successful run to the state championship in 2000. He was named Most Valuable Player of the state All-Star baseball team. A natural and gifted athlete, Aaron also played high-school football with talent enough to win a football scholarship to Virginia University. From 2001-2003, Aaron served honorably in the Ghana Accra Mission for The Church of Jesus Christ of Latter-day Saints. He developed a deep love and compassion for the African people, learning to speak in the Ghanaian dialect Twi ("chwee"). It was always his dream to return there one day. When it came time to return home, Aaron tried to discreetly bring his pet monkey back with him, but of course, was soon found out. For a time, Aaron's wanderlust took him to the U.S. Virgin Islands, where he was a jet-ski and diving tour guide. He loved to read -- favorite books were The Lord of the Rings and Harry Potter series. And, although he didn't want to admit it, he also was hooked on the Twilight series and OC. Other interests included writing poetry, playing and writing music (he played both piano and guitar), art, and photography. He also could swing a mean golf club. To Aaron, family was everything, and he loved them truly and unconditionally. His most prized possession was his rambunctious little 4-year-old son, Jaden. They often went camping together, rode horses, played in the park, sat around a campfire and laughed until they had to catch their breaths. Aaron took great pride in his Native American culture and heritage. His Navajo clan was Ta'baaha (Edgewater) and his maternal grandfather's clan was Lo'K'aah Dine (Reed People). He was passionate about learning the culture's stories, skills, ceremonies and arts, and incorporating them into his life. He learned to make knives, jewelry and leather crafts. A favorite pastime was to build a fire outside and listen to stories of the Navajo people. He also was an accomplished Native American dancer and performed locally and internationally with his mother, uncle and siblings. He participated in sweat lodges and sang Sundance songs with his brothers and uncles. Besides his son, Jaden Winter, Aaron is survived by his parents; Ray and Milli Cody Garrett, brothers; Jathan Cody (Marianne) Garrett and Kotah Ray Garrett, sisters; Meagan Garrett (Ty) Welch and Tessie Marie Garrett. In lieu of flowers, donations can be made to Bank of American Fork in the name of Aaron Garrett, for a special fund on behalf of his son, Jaden. Funeral services for Aaron will be held Monday, August 2, 2010 at 11:00 a.m. in the Alpine North LDS Stake Center Chapel, 1125 North Alpine Blvd., Alpine, Utah. Friends may attend a viewing at the church on Sunday evening from 6:00 - 8:00 p.m. and Monday morning from 9:30 -10:45 a.m. prior to services. Interment, Alpine City Cemetery. Funeral Directors - Warenski Funeral Home of American Fork, Utah. Condolences may be sent to the family at www.warenski.com

To plant trees in memory, please visit our Sympathy Store.
Published by Deseret News on Jul. 31, 2010.
MEMORIAL EVENTS
No memorial events are currently scheduled.
To offer your sympathy during this difficult time, you can now have memorial trees planted in a National Forest in memory of your loved one.
MEMORIES & CONDOLENCES
27 Entries
Even though I have such little memory of him, I remember his warm voice and happy smile, even though I had only so much time to be with him, He still means everything to me, I couldnt ask for a better father.
Jaden Garrett
Family
October 6, 2020 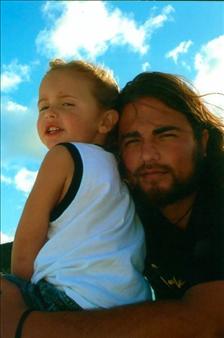 Aaron will forever be a part of us, I am so grateful for your family. You will always be in my thoughts and prayers.
Sarah Fitzgerald
December 9, 2010
Ray, Milli and family;
I just heard of Aarons graduation from this life and my heart goes out to You all.
[email protected]
Richard A. Wells
Richard Wells
August 16, 2010
Ray, Milli and Garrett family,
We have just heard of the tragedy that come to you and your family. We are so saddened to hear about Aaron. We know how very proud that you have always been of him and his accomplishments. He will be sorely missed by many. Keep those beautiful memories in your hearts and know that our thoughts are with you at this time. God Bless
Carl & Patty Wanlass
August 8, 2010
Ray and Milli Family. I am so saddened to hear about Aaron. Thoughts and prayers are with you and your family.
-Kristie Ferguson
Kristie Ferguson
August 6, 2010
To the Garrett family,

Our thoughts and prayers are with you. God bless you.
Krzeminski Family
August 4, 2010
I love you guys so much!!! I am truly sorry, Aaron was and is a great kid! May Comforting Angels continue to round about your family, and may gthe testimony of the savior bring comfort.
Kolby Fisher
August 3, 2010
Dear Milli, Ray and family,
Words cannot express our sadness at the news of Aaron's passing. Our minds are flooded with wonderful memories of him in our home in San Diego as he awaited his Visa papers to continue his mission in Ghana. Aaron was such a special soul and we grew to love him in the short time we got to know him. His humor, his faith, his unique way of expressing himself, how he loved to eat my ham spread sandwiches and so much more. He made an impact in our lives and especially to our two young boys at the time, that saw him as a hero in missionary form. They subsequently both served missions and I don't think Aaron knew the good example that he was to them. It had been a while since we had last seen Aaron and your family, but know that he and the Garretts where fondly thought of often. We will never forget your boy and are grateful for the gospel plan that reassures us we will get to see Aaron again in the eternities.
Our prayers are with you.
Jaime & Alexandra Conde
August 2, 2010
Aaron,

So many great memories come to mind as I think about you. I am so happy to have known you. Your funeral was a celebration of your life and your legacy that will be left behind.
Jayne Miller
August 2, 2010
Dear Ray and Milli and family,

We are heartbroken to learn of the death of your son and understand that there are no words to express our feelings at this tragic time. As we read of Aaron's many accomplishments and talents, we could see that he is truly a combination of his incredible parents. Please know that you are in our thoughts and prayers.
Cliff & Shauna Craig
August 2, 2010
Dear Ray, Millie and Family,
It breaks our hearts that we can't be there. We love you so so much and it is such an honor to be a part of your family. What your family shares is truly a rarity. That little boy we share is such a sweetheart and is loved so much by us. We will miss Aaron so very much!! Below is what Hal wrote from us on another site.

We never know how much time we have here on earth thats why we should make the most of every day. The Garrett Family truly understands this concept and emulates it in family, togetherness, unconditional love and empathy. Aaron is/was the result of this upbringing, who shared his talents and love for one another, a trait that he has instilled in his son. Aaron was an awesome dad who's son was the twinkle in his eye. Thank you Aaron for being the man you are. We are so sad that you are no longer with us. We love you and you will be deeply missed. A loving family will ensure your legacy on earth continues in pride and in honor. Until we meet again. Love Hal and Judy Fitzgerald
Hal & Judy Fitzgerald
August 2, 2010
I didn't know Aaron but he sounds like such an amazing person that contributed so much to the world. I do know Tessie as my student and my student aide and I want to send you love and comfort, Tessie. You are a beautiful and gifted woman and my heart goes out to you and your family at this time. May you find comfort and peace and feel our love and prayers.
Rebecca Gardner
August 2, 2010
Dear Milli, Ray, and family; My love and prayers are with you all. So hard to lose someone so wonderfully talented, handsome, loving and kind as Aaron. My heart goes out to all you. I hope your hearts will be comforted and healed by the knowledge that you will be together again. Love you all, Kathleen (Devitt) Millward
Kathleen Millward
August 1, 2010
The Garrett Family,
I am truly sorry for your loss. I enjoyed your kids when I had the chance to babysit for them. Best wishes to your family during this difficult time.
April Morse
August 1, 2010 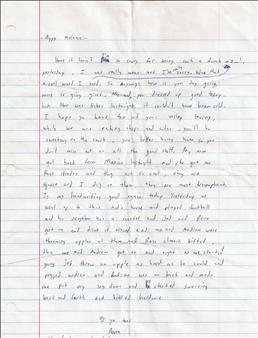 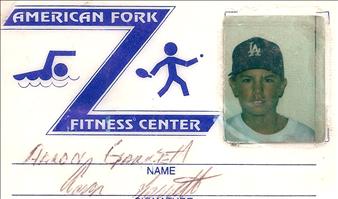 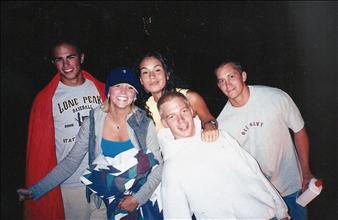 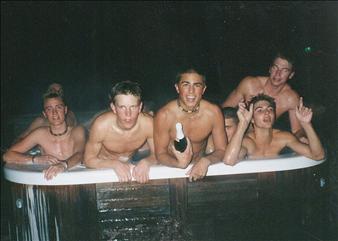 I dont even know what to say, my heart breaks for you. Know that everything happens for a reason. I hope your family finds strength, and unity through Aarons passing.

I dug up a pile of pictures of Aaron, and notes we used to pass back and forth in the halls at school. In every one he ended with "You look great today" or "I dig your jacket today" "Peace, Ace." He was such a sweetheart. I will keep his memory close.
Melanie (Kohler) Edwards
August 1, 2010
Our thoughts and prayers are with your family. We love you all so much. David, Lisa, Daysha, Heather, Shanda, Kira, and Riley Hannemann
Lisa Hannemann
July 31, 2010
Our thoughts and prayers are with you and your family. We love you all so much.
David, Lisa,Daysha, Heather,Shanda,Kira, and Riley Hannemann
July 31, 2010
Our deepest condolences goes out to you and your family. We were very sadden to hear of Aaron's passing. Our thoughts and prayer are with you during this difficult time.
Shirley Francisco
July 31, 2010
Ray and Millie,
My thoughts and prayers are with you in these difficult times. I hope you can find peace and comfort!
With deepest sympathy,
Misty (Southwick) Sargent
Misty (Southwick) Sargent
July 31, 2010
My heart breaks for all of those that have known and loved Aaron. He was like another brother growing up. He was always in the fridge at our home and always ate all of the cereal..... This whole group af boys were strength and held a bond that will last for eternity. My thoughts and prayers are with your family at this time of loss and even after experiencing this myself I wish I had wonderful words, but all I have is cherish his life and celebrate all the wonderful memories you have. You are blessed with a beautiful gift that he has left behind.
Love Always,
Melissa Romney Frasure
Melissa Romney Frasure
July 31, 2010
Of all my memories of Aaron, what stands out in my mind was how easy it was essentially everyone to consider him a sincere friend. He will be sorely missed.
Wayne Leavitt
July 31, 2010
My heart is sad today with this news. I enjoyed playing baseball with Aaron and justbeing around him. He always made the guys laugh when we were together. I will surely miss this great man. May God bless his son and his family.
Brian Hunter
July 31, 2010
Dear Ray, Milli and Family,
We are very saddened to hear of the passing of Aaron. Our love and thoughts are with you at this difficult time.