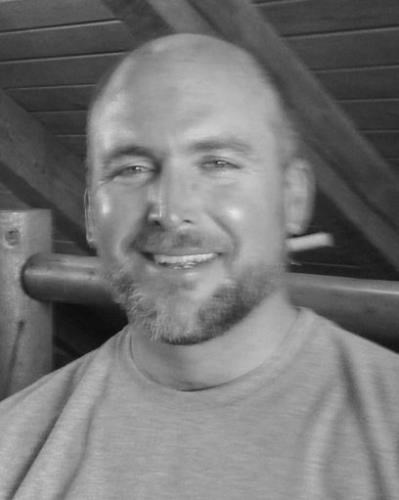 BORN
1967
DIED
2017
Andrew (Drew) Rigby
8-29-1967- 2-18-2017
Drew Rigby passed away peacefully, but not without a fight, early in the morning February 18, 2017 surrounded with peace and love at the home of his parents due to a rare brain cancer. He was born August 29, 1967 in Salt Lake City to Brent W Rigby and Marsha Nicolaysen Rigby. He grew up in Salt Lake City, Minneapolis, MN, Baltimore, MD and Overland Park, KS where he made many lifelong friends. He graduated from Brighton High School in 1985. He honorably served two years in the Army with Big Red One at Fort Riley, KS He attended the U of U for a year and went on to graduate from the University of Kansas (Rock Chalk Jayhawk). He was an avid Jayhawks and Kansas City Chiefs fan and loudly cheered for the running Utes. He married Kelly Shoemaker in 1994, they later divorced. They had a daughter Celia who Drew will forever adore. Drew & Celia enjoyed their time together traveling, camping, hiking, fishing, listening to music and cooking. Drew worked as a chef for Utah Food Services fulfilling his lifetime passion for cooking. Drew was a great dad, brother, uncle, nephew, cousin, friend and son. Drew inherited his booming voice from his grandfather which gave him the upper hand in his ability to argue either side of the coin on any topic. He will be remembered for his tie dye shirts, his barbeque ribs, his love of nature and animals and his love for his family. They meant everything to him. Everyone who knew him will miss him deeply. Drew is survived by his parents Brent and Marsha, his brother and best friend Patrick (Christi), his daughter Celia, his nephews Dragan and Paden and niece Courtney and his grandmother Arline Petterson Nicolaysen. A special thanks to Lab 3 at the Huntsman Cancer Center and the warmth of the people that work there. Drew will be laid to rest in the Salt Lake City Cemetery. He lived a fun colorful life.
Online condolences www.cannonmortuary.com.
To plant trees in memory, please visit our Sympathy Store.
Published by Deseret News on Feb. 26, 2017.
MEMORIAL EVENTS
No memorial events are currently scheduled.
To offer your sympathy during this difficult time, you can now have memorial trees planted in a National Forest in memory of your loved one.
Funeral services provided by:
Cannon Mortuary
GUEST BOOK
Sponsored by Cannon Mortuary.
4 Entries
This popped up in my email yesterday and I was so surprised. I think about you so often but I never do anything about my thoughts! I do hope you are doing ok. I can't imagine losing a child and then going on. It's been 2 years? I'm so sorry.
Becky Hutcheon
March 4, 2019
We are so sadden by the loss of Drew. He was always so quick to help if saw me struggle with something too heavy for me to lift and so pleasant to talk with. Know that our thoughts and prayers are with you.

Val, Lee and family
March 2, 2017
My sincerest condolences to your family during this time of grief. Please find comfort in the verses at Jeremiah 29:11-13
March 1, 2017
Brent and Marsh,
We are so saddened about the passing of Drew. Our prayers are with you and Pat and your family.
Hutch and Becky
February 27, 2017