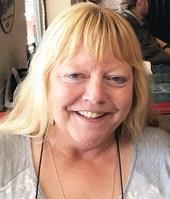 April was born on April 19th, 1959 to the late Joseph 'Joe' Earl Smith III and Fay Draper Smith. She received her B.S. in Mining Engineering from the University of Utah in 1982, and went on to be a trailblazer for women in her field. After a successful, 35-year long career at PacifiCorp Energy, she retired to Granbury, Texas.

April was a beacon of light in this world and was loved by all who met her. She had an unfailing willingness to help others, even at her own expense. This drive extended to animals, all of which she loved dearly, but especially dogs. She was most passionate about music, particularly Tina Turner, Stevie Nicks, and was considered by many of her friends and family to be the biggest Rolling Stones fan. She had a gift to find the perfect lyric for any occasion.

April was preceded in death by her husband, Jeff Haynes; parents, Joe Earl and Fay; and her sister, Terry Fay Casto. She is survived by her brother, Joseph 'Jody' Earl Smith IV; step-sister Melodie Mansell; and step-mother, Ann Smith; as well as many loving cousins, nieces, and nephews.

A prayer service will be held at 11 AM on Friday, September 17 at Anderson & Goff Mortuary in Draper, Utah, followed by a celebration of her life.

In lieu of flowers, memorials may be made to causes April supported: Tunnel to Towers (t2t.org) or Live On Utah (liveonutah.org).

Condolences may be sent to: www.goffmortuary.com. -
Published by Deseret News from Sep. 16 to Sep. 17, 2021.
To plant trees in memory, please visit the Sympathy Store.
MEMORIAL EVENTS
Sep
17
Prayer Service
11:00a.m.
Anderson & Goff Mortuary
11859 South 700 East, Draper, UT
Funeral services provided by:
Anderson & Goff Mortuary
MAKE A DONATION
MEMORIES & CONDOLENCES
Sponsored by Anderson & Goff Mortuary.
1 Entry
April was a dear sister-in-law and friend. She cared deeply for her family and was loved by so many. I treasure the time we spent together throughout our lives together. She will be remembered for kindness, generosity, and love.
Jayne Lychako (Haynes)
September 17, 2021
Showing 1 - 1 of 1 results