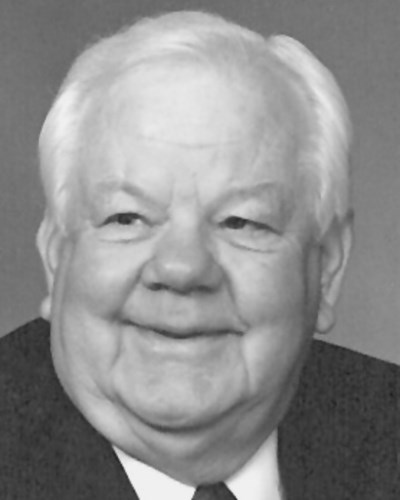 FUNERAL HOME
Memorial Holladay-Cottonwood Mortuary
4670 South Highland Dr
Holladay, UT
Dr. Carl Edward Hansen
1922 ~ 2013
Carl Edward Hansen, of Holladay, died Thursday September 5, 2013 in Murray, Utah.
He was born October 11, 1922 in Magna, Utah to Edward and Hulda Hansen. Carl served in the Army Air Corps in Italy and North Africa during WW II. In 1945, he married Lila Salm, in the Salt Lake Temple.
After graduating from the Chicago College of Optometry, he practiced in Provo and Salt Lake City.
Carl was an active member of the LDS Church and served in many callings.
He joined the International Lions Club in 1951, was president several times and received many awards. His years of dedication were realized with completion of The Holladay Lions Fitness and Recreation Center, and barrier free park.
Carl's greatest priority and love was his family. He is survived by his wife Lila; children Sheri (Owen) Hogle, Eric (Camille Thorn) and Kathy (John) Sokia; nine grandchildren and 14 great-grandchildren. They are grateful to have had such an honorable, loving, kind and humorous man watching over them all.
The family wishes to thank Dr. Michael Galindo for the compassion and care he showed during this difficult time.
Funeral services will be held on Friday, September 13, 2013, at 11 a.m. at the Olympus Cove Ward, 3862 E. Oakview Drive.
The family will greet friends Thursday evening, September 12, from 6:00 p.m. to 8:p.m. at Cottonwood Holladay Mortuary, 4670 S. Highland Drive and Friday, September 13, from 10:00 to 10:45 at the church.
Online condolences to www.holladaycottonwoodmortuary.com

Published by Deseret News from Sep. 10 to Sep. 11, 2013.
To plant trees in memory, please visit the Sympathy Store.
MEMORIAL EVENTS
To offer your sympathy during this difficult time, you can now have memorial trees planted in a National Forest in memory of your loved one.
Funeral services provided by:
Memorial Holladay-Cottonwood Mortuary
MAKE A DONATION
MEMORIES & CONDOLENCES
11 Entries
Lila and family.....we are so sorry for your loss. Carl was one of our favorite people of all time! He always made you feel good with his smile and happy demeanor. We left the Mt. Olympus 2nd ward over a year ago, so we've been somewhat out of touch. Just wanted you to know we're thinking of you and your family at this hard time.

Ray and Mary Ann Clawson
September 14, 2013
Lila and family, so sorry about your loss. Due to health problems with my husband and myself we wanted you to know we are thinking about you at this time. Carl was a great man I admired him. Hope all of your family is doing well. Dina
Dina&Terry Tuttle
September 13, 2013
Dear Hansen family,
I will always remember Carl's gentle handshake and kind smile. He always had something nice to say and was a positive force for good in so many lives. My parents also wish for the family to know how much they treasure the wonderful memories they have of him and that you are all in our thoughts and prayers at this time.
Marianne Marshall Brazell
September 12, 2013
Hi Eric,

I am sorry to hear about your father's passing. He led a long and full life and that is all anyone of us can ask. I wish the best for you and your family during this difficult time.

Bill and Kathy McNeil
Bill McNeil
September 12, 2013
I will truly miss Dr. "Handsome" . What a Great Man and friend.
Lynda Casey Ellingson
September 11, 2013
Sending love to all of your family and hope these days are full of celebrations for a wonderful man
Michael and Michelle dudley
September 10, 2013
Sheri, what a wonderful father! He has given the gifts of his care fore you, a great example, and good memories which will be a comfort to you.
Much love from Wendy and Julie
Wendy Huffman
September 10, 2013
Dear Hansen family,
I was saddened to hear of your dear father's passing. I will always remember him for his kindness and generosity. He touched many lives for good and will be missed, but our memories will live on.
Much love,
Robyn Marshall Olson.
September 10, 2013
Dear Hansen Family,
I was so sorry to hear about Carl's passing. He was such a kind man and an anchor in the ward. May you feel peace and the Savior's love at this time.
Frances Marshall Wyss
September 10, 2013
We are sad to hear about Carl's passing
and would like to express our condolences
for a wonderful man who took care of our optometric needs and was a good friend for many years. Our thoughts are with his wife Lila and the family.Silvia and Walter Schwemmer (Chuck A Rama)
September 10, 2013
Kathy,
I am so sorry for the loss of your father, if you need anything please let me know.