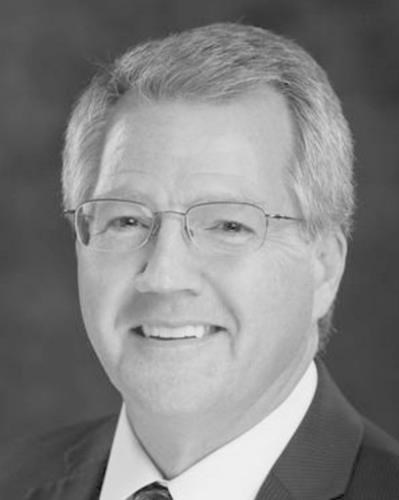 BORN
1958
DIED
2017
ABOUT
Hillcrest High School
FUNERAL HOME
Broomhead Funeral Home - Riverton
12600 South 2200 West
Riverton, UT
1958 ~ 2017
Our beloved husband, father, brother, son, uncle and friend, David Russell Penrose passed away March 30th, 2017 after an unexpected cardiac/neurologic event. Born July 10, 1958 in Salt Lake City to Shirley and Russell Penrose.
David graduated from Hillcrest High School and BYU. He received a B.S. Degree in Family Financial Planning and Counseling. He worked in his chosen field for 29 years, most recently for TIAA as a financial advisor.
He served an honorable mission for the LDS church in the Chile Osorno Mission. He married his sweetheart Sheri Myles in the Salt Lake City Temple on December 3, 1988.
After their marriage David and Sheri lived in the Boston area for three years then moved to Cary, North Carolina where they lived for seven years during which time they became parents to their three beloved sons Ryan, Mitchell and Nicholas. They have been living in Salt Lake Valley since 1999.
David was a talented musician, singing in his ward choir as well as playing trumpet in the Murray Concert Band. He was a great athlete, excelling in wrestling and competing in cross country running in his high school years. In his early fifties he rekindled his passion for running, continually improving his marathon times until he was able to qualify for the Boston Marathon, which he was planning to run on April 17th. He was an avid gardener with a green thumb, which enabled him to have a beautiful garden and enjoy the bounty of the earth.
David loved his family dearly and cherished time together vacationing, hiking, riding bikes and going on other adventures. He spent a great amount of time supporting his son's activities and teaching them important life lessons. He helped them become talented musicians and supported their efforts in becoming Eagle Scouts. He loved Sheri and his boys immensely. David loved the Lord and was very dedicated to his many callings within the LDS church.
David was preceded in death by his sisters Pamela, Deborah and Denise. He is survived by his parents Russell and Shirley Penrose, wife Sheri Myles Penrose, Sons Ryan, Mitchell and Nicholas Penrose, brothers Kevan (Sidney) Penrose, Greg (Caroline) Penrose, Ron (Leslie) Penrose, and sister Sherrilyn (Cody) Hawkes.
Funeral services will be on Tuesday, April 4 at 11 a.m. at The Church of Jesus Christ of Latter Day Saints at 12110 South, 1300 West, Riverton, Utah. A viewing will be held from 9:45-10:45 am.
Burial services will be at the Riverton City Cemetery 1500 West 13200 South, Riverton, Utah.
Dave, we will miss your kind, giving, gentle presence in our lives. We will always love you dearly. www.broomheadfuneralhome.com
Published by Deseret News on Apr. 2, 2017.
To plant trees in memory, please visit the Sympathy Store.
MEMORIAL EVENTS
Apr
4
Viewing
9:45a.m. - 10:45a.m.
The Church of Jesus Christ of Latter Day Saints
12110 South, 1300 West, Riverton, UT
Apr
4
Funeral service
11:00a.m.
The Church of Jesus Christ of Latter Day Saints
12110 South, 1300 West, Riverton, UT
Funeral services provided by:
Broomhead Funeral Home - Riverton
MAKE A DONATION
MEMORIES & CONDOLENCES
Sponsored by Broomhead Funeral Home - Riverton.
19 Entries
Dave got me to keep running for a few years. I always admired his good, uplifting spirit, and our friendship. He was a great example to all of us. We will all miss him, but will continue loving you, Sheri, and your family.
Lynn Packham
July 2, 2017
Bill and I just want you to know what an example Dave is and was to us. He taught us how to love, to be kind and never to speak ill of anyone. He will be missed with his kind smile and love for the gospel and life which he so willingly shared. We love you all.
Bill and Kit Hansen
July 2, 2017
Kambriella would run through the house every Sunday after church talking about "Sheri and Dave" this, and "Sheri and Dave" that. She loves you both because she knew you loved her. Sitting with Dave in Leadership Training class and listening to him share his thoughts and testimony and thinking to myself... "what a good man." We love you all so very much - today forever and always.
Susette Trickett
July 2, 2017
Dear Sheri,

My heart goes out to you and your family. What beautiful comments people have written, and what an amazing man he was. Love to you all.
Patricia Furman
May 26, 2017
Thank you for this wonderful "Miles for Dave" video put toghther by Ed and Tracy Day and thought up by Ron & Leslie Penrose. We love you.

https://spark.adobe.com/video/9qEHHRxWeWc7f
SheriRyanMitchNick Penrose
April 21, 2017
David was one of my best neighborhood friends, a classmate and a guy you could count on. Even as a young person he displayed a love and acceptance for people that were very different than he was. By my competitiveness I probably gave him reason to want to punch me more than once, but he never displayed anger or frustration with me. I always thought David had the best name in the world. His first name is the same as my brother (who passed last year) and his middle name was the same as my first. How could it get any better? My condolences to all the Penrose family. They were important to my early life, and they are wonderful people to have produced a son and brother like David.
Russell Behrmann
Friend
April 18, 2017
On a backpack trip in 1973 we went into Black Lake. David always seem to have the right feel for catching fish. I think he out- fished all of those of us who were there the whole week. He caught a tremendous amount of fish at one place on the lake that we named Penrose Point. A place where we all ended up having a good success. I can still picture that Lake today and see David standing there pulling out fish after fish.

In our 9th grade year (Spring 1973) David and I decided to play hooky from school on our Lagoon day. Instead of going for the rides at Lagoon we got our fishing gear and headed to 90th South to the Jordan River. We spent our day in the sun catching catfish and carp. After we fished well into the afternoon we walked back home. I never regretted not going to Lagoon but now I treasure that time sitting on the bank of the river, talking about whatever, fishing poles in hand. A precious memory of my youth with my dear friend. (Quote entered by Sheri Penrose)
Phillip Greenhalgh
April 13, 2017
Such an amazing friend and co-worker. So sad that he is gone way too soon. Love to his family and hope he is singing with the angels.
Rebekah Davies
April 5, 2017
It was an honor to have known and worked with Dave. He was genuinely a kind person and he will be missed. My condolences.
Kuanmei Huang
April 5, 2017
My thoughts and prayers are with David's family. I am so sorry for your loss.
April 4, 2017
Sheri,

My deepest condolences on your loss of Dave. I had the pleasure of working with him for a couple of years while I covered the Salt Lake territory. He always carried himself with a quiet grace. Dave was kind and cared about the well being of his clients. I know he was an avid runner and spoke often about how his son's and family who he was deeply committed to.

A funny story. The first expense report Dave submitted after his work trip to Idaho was odd. It was a bill from the grocery store where he bought bread, deli meats, etc. He made his own sandwiches while on business travel. I thanked him for how he cared about our bottom line. He just smiled...not sure that was why he chose that but it was a funny exchange. He was economical and easy going.

Best,
Maggie Dehn
(TIAA)
Maggie Dehn
April 4, 2017
Sorry for your loss. I had the great pleasure in getting to know Dave when I would let him into our office at UVU. He talked about his family and how excited he was to be able to run the Boston Marathon.
Christie Snyder
April 3, 2017
I saw Dave in Charlotte in February, and I am so glad I had a chance to speak with him about his upcoming trip to Boston.

I am very thankful to have worked with someone of his great character.

My condolences to the entire family - he will be greatly missed in our company.
Marty Jaspers
April 3, 2017
Dear Penrose Family,

I got to meet Dave at our San Diego retreat with TIAA last year, he was a wonderful human being, great mentor and will be dearly missed. My condolences go out to you.
Debra Anderson
April 3, 2017
Dear Sheri & Family,

I didn't have the privilege of meeting you or any other members of Dave's family, but I want you to know how much we loved and appreciated Dave at BYU. Dave was our TIAA financial counselor for many years. He has blessed the lives of many faculty, administrative and staff members over the years. Dave and I have spent many hours in meetings and personal one-on-one time talking about all aspects of finances and just life in general. Dave was not only our financial counselor - Dave was our friend. We will miss his positive, upbeat personality and his warming smile. May Heavenly Father comfort you and your family in the days ahead.
Doug Lee
April 3, 2017
Dear Sherrie and Boys,
We were deeply saddened to hear of Dave's passing. Dave was a favorite part of our benefit family at BYU. We enjoyed working with him and will miss our association with him. We feel very lucky that we got to know him and work with him. As you celebrate his life please know that our thoughts and prayers are with you at this difficult time.
BYU Benefits Services
April 3, 2017
Dave was an exceptional roommate and person! I will never forget him......God bless you, Dave, on your new mission, and God bless the family and loved ones you've left behind!
Gary Williams
April 3, 2017
Sherrie I am so sorry for your loss. I pray God will wrap his loving arms around you and your family and comfort you during this time of sorrow. Heaven may have gained an angel but you now have gained a guardian angel. David may not be here in this physical world but his spirit will always be right by your side guiding and protecting you and your family.
Stacy Beck-Shemenski
April 2, 2017
Dear Penrose Family,
You will always be my second family, and that includes dear Dave...there are too many memories to share, but mostly I am thankful I was able to grow up in your house and that Dave was one of my "brothers", mostly quiet, but very smart and funny. He could make us laugh with his quick wit. He had a quiet confidence and was always good with money (remember the Camaro we all rode around in while he was gone on his mission)? He loved and respected his parents, and you did a wonderful job raising him. I'm so sorry he has been taken way too soon. My heart goes out to you all, my love is with you - especially Sherrie, my loving friend and sister. All my sympathy, with love,
Becky Stannard-Rose
April 1, 2017
Showing 1 - 19 of 19 results