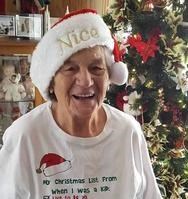 Did you hear the one about the orphan girl in Amsterdam? One day in her late teens she took a train with her older sister to a nearby city where they were performing in a play together. They arrived early, and went inside and onto the stage to warm up their voices. A nice guy showed up out of nowhere and hopped on stage, singing alongside her while her sister played the piano. On the train back to Amsterdam she told her sister, "I'm going to marry that man." Her sister laughed and told her she was crazy.

If you've ever been blessed with the opportunity to sit and chat with Frederika Copier, chances are good that you have heard that one. And if you have, you've most likely also heard the one about how when that nice guy eventually did ask her to marry him, she said yes, but on one condition… she wanted to have 12 kids. He agreed, and they married, then immigrated to America after the war where they raised their big, amazing family.

Frederika Copier, 95, peacefully left this life on August 28, 2021. Just before passing, she opened her eyes and flashed a great big smile. We can only imagine her joy as she was lovingly greeted on the other side by her beloved husband Govert, and also reunited with three sons, her parents, 8 brothers and sisters, and many dear friends.

Frederika "Freddie" van der Wouden Copier was born on December 4, 1925 in Amsterdam, Netherlands, to Pieter and Cornelia van der Wouden. She had happy memories of her childhood, but tragedy struck the family when her mother passed away on December 22, 1936, just 3 days before Christmas. The following year on December 19, 1937, her grieving father also passed away. Freddie was sent to an orphanage, but later was fortunate enough to be invited to live with some families from her church.

She was a child during the Great Depression, and as a teenager experienced the horrors of living in a German occupied country during World War II.

Her life was changed forever when she met Govert Copier in her late teens. It was love at first sight.

Govert and Freddie were married on March 29, 1945. The couple immigrated to Utah in 1948, along with their two young sons, John and Govert. They welcomed ten more children into their family, and were thrilled with the birth of each child. Everyone that knew Freddie can attest to the fact that she loved babies! That excitement continued with the birth of her grandchildren. Actually, when any baby was born! Even though Freddie was very frugal, she always had a stash of baby items to share with newborns, and was thrilled when a new mother asked for her advice and help.

The Copiers lived their lives sharing their love with their family, their church and their country. They were grateful for the freedoms that they enjoyed in their new country, and proudly displayed their flag whenever they could. When their third child was born; their first daughter, but more importantly, the first American citizen in the family, they proudly hung the American flag from their front porch to celebrate.

They also loved their native country and all things Dutch, which was very apparent as you visited their home and observed the windmills, wooden shoes and delft blue. After Govert retired, they were excited to return to the Netherlands to serve as missionaries.

The Copiers cherished their association with their dear friends in the Millcreek 8th Ward, and enjoyed serving in whatever capacity they could. Freddie served many years as the quilting specialist and Compassionate Service Leader. She loved making quilts for the Relief Society bazaars or to give to those in need, She helped organize visits and meals for others, and possessed a special talent for knowing when someone needed help. Freddie and Govert loved to visit and serve the "elderly" people in the ward, which they faithfully continued to do well into their 90's. Freddie also was called as the Primary President when she was 80 years old.

Three months after celebrating their 70th wedding anniversary, Freddie lost her beloved husband, when Govert passed away on June 28, 2015. Freddie has missed him each and every day since. She was also preceded in death by 3 sons, Govert, Rick, and Ron, her parents, Pieter and Cornelia van der Wouden, 5 brothers, Gerrit, Jacobus, Jan, Cornelis, Hendricus, and 3 sisters; Corina, Jeltje and Pietertje.

We are grateful and want to thank the staff at Wentworth Coventry for the loving care they provided for our mother these past few months.

Published by Deseret News from Aug. 31 to Sep. 1, 2021.
To plant trees in memory, please visit the Sympathy Store.
MEMORIAL EVENTS
Sep
1
Viewing
6:00p.m. - 8:00p.m.
Millcreek 8th Ward
4558 South 600 East, UT
Sep
2
Viewing
10:00a.m. - 11:30a.m.
Millcreek 8th Ward
4558 South 600 East, UT
Sep
2
Funeral service
12:00p.m.
Millcreek 8th Ward
4558 South 600 East, UT
MAKE A DONATION
MEMORIES & CONDOLENCES
1 Entry
My Aunt always loved the fact that I was named after her, something my parents were happy to do. She always loved introducing me and commenting that I was her namesake. We were extremely lucky in the VanDerWouden clan that our respective parents lived through the war and were all able to have families and to have everyone stay connected. It is with sadness that I say goodby to Tante Freddie, but memories of her and her brothers and sisters will live on in my heart forever.
Frederika VanDerWouden Plaudis
August 31, 2021
Showing 1 - 1 of 1 results