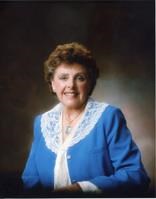 Alpine, UT—Geraldine Hamblin Bangerter, 97, passed away peacefully of natural causes at her home in the early hours of Mother's Day, May 9, 2021, in Alpine, UT. Born March 3, 1924, in Salt Lake City, UT, to Henry Marcene and Duella Eyre Hamblin, she possessed great faith and loyalty to the restored gospel in The Church of Jesus Christ Latter-day Saints. Raised in Murray, UT, Geraldine (Geri) graduated from Murray H.S. in 1942 and excelled academically, in athletics, and as a trumpet player. She served in the U.S. Nurses Cadet Corps during WWII, graduated from St. Mark's Hospital School of Nursing in 1946, and earned a BS degree from the University of Utah in 1951. For four years Geri worked as a registered nurse in Rawlins, WY, and co-owned a spudnut shop with her brother Dale.

On October 14, 1953, she married Wm. Grant Bangerter, a widower with three small children, in the Salt Lake Temple. They lived in Granger, UT, where she served as stake speech director and supported her husband as bishop and then president of the North Jordan and Granger Stakes. In 1958 they moved to Brazil with six children to preside over the Brazilian Mission. With the challenges of mission life in a new country, Grant and Geri adopted the motto "Enjoy It!" Geri presided over the Relief Societies in the mission and was a natural missionary. Her unique ability to organize and work selflessly with energy and intelligence drew people and responsibility to her. As mission mother and nurse, she pioneered health treatments to prevent serious illness. Her work was later adapted into a missionary health manual worldwide. By the time they left Brazil in 1963 they had added three more children to their family. Soon after returning to Granger they welcomed the birth of their tenth child, and six years later they moved to the family farm in Alpine.

In 1974 Geri and Grant with their children were called to open the Portugal Lisbon Mission. That next year Grant was called as an Assistant to the Quorum of the Twelve Apostles and later into the First Quorum of the Seventy. Over the next 14 years they travelled extensively to fulfill those responsibilities, living in Brazil again from 1977 to 1979 and presiding over the completion of the São Paulo Brazil Temple. They also worked for two years in Chile. Geri learned Portuguese and Spanish and cherished the over 600 missionaries that served with her.

Geri enjoyed horseback riding, softball, skiing, golfing, bowling, camping, fishing, and singing in harmony. She wrote and compiled many family histories and had a deep love for her pioneer heritage. Her mother's heart was shown through her close love for and joy in each of her 65 grandchildren and their families.