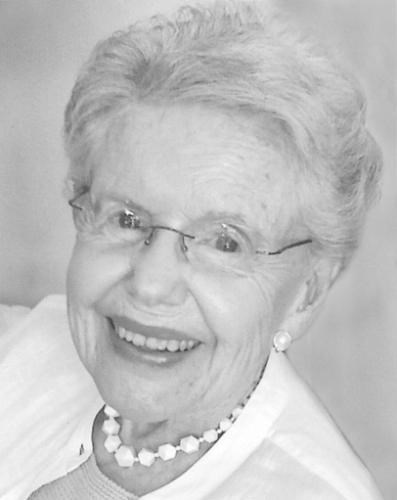 BORN
1921
DIED
2015
Our dear mother, grandmother and great-grandmother, Irene Christensen Love, died peacefully on April 24, 2015 at the age of 93.
Irene was born to John William and Sadie Bradley Christensen in Moroni, Utah on November 11, 1921. She spent her very early years in Spanish Fork before moving to Provo where her father was in the drug store business. She graduated from Brigham Young High School and then obtained her bachelor's degree in English from Brigham Young University. It was at BYU where she met her husband, William (Bill) Love who preceded her in death approximately four months earlier, after over 73 years of marriage.
Irene and Bill enjoyed a charmed life together, blessed with a close family, many friends and good health. After WW II, they moved to Menlo Park, CA so Bill could attend Stanford Law School. They fell in love with the San Francisco Bay Area and spent the remainder of their lives in the Palo Alto and Los Altos areas. Irene spent her life as a homemaker. She was an excellent cook, gardener, gifted decorator and party host supreme. She was a patron of the arts in the Bay Area and served as a volunteer for many years with the Allied Arts Guild and other charitable organizations.
Irene loved reading, dancing, playing bridge, needlework and traveling. She and Bill were able to travel to many wonderful places across the globe, often taking family members with them. She was particularly fond of trekking in the Swiss Alps. She was always regarded as beautiful and refined in manner and appearance.
Irene loved being a grandmother to her eight grandchildren, who at her insistence, knew her as "Nanny."As an English major and our resident grammarian, she was tireless in her efforts to correct her husband, children and grandchildren when using the English language improperly, though her efforts were often in vain.
Irene is survived by her three children Christopher (Betty) Love, Elizabeth (Anthony) Antonelli and Frederic Love. She is also survived by her sister Miriam Bushnell, eight grandchildren and five great-grandchildren. She was preceded in death by her husband, William and sister, Marguerite McLeran. A private family memorial service will be held in her honor.
To plant trees in memory, please visit our Sympathy Store.
Published by Deseret News on May 8, 2015.
MEMORIAL EVENTS
No memorial events are currently scheduled.
To offer your sympathy during this difficult time, you can now have memorial trees planted in a National Forest in memory of your loved one.
MAKE A DONATION
MEMORIES & CONDOLENCES
0 Entries
Be the first to post a memory or condolences.