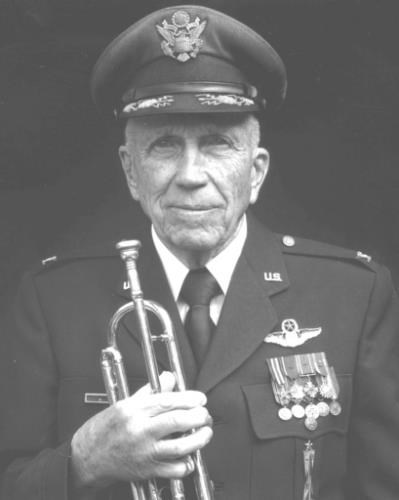 BORN
1921
DIED
2016
1921 ~ 2016
One of the Greats of that Greatest Generation has flown into history. Jack LeRoy Tueller, Col. USAF Ret., died August 15, 2016 in Bountiful, Utah. He was born January 28, 1921 to Percival and Augusta Snow Tueller in Evanston, WY. He married his college sweetheart and fellow BYU Cougar band trumpet player, Marjorie Rogers, March 17, 1942 in the Mesa LDS Temple. They were married for 69 years.
He served his country heroically during WWII as a fighter pilot, flying over 100 missions in his P-47 Thunderbolt over Europe, including the D-Day invasion and other key battles. He was awarded the Silver Star, the Distinguished Flying Cross and numerous other campaign and air medals. Jack made the USAF his career, serving in the Korean and Viet Nam wars, Missiles and Space Command at the Pentagon, and Strategic Air Command headquarters. After retiring from the Air Force with the rank of colonel, he became vice-president of two engineering firms. Jack served faithfully in numerous church callings throughout his life, but especially in youth programs. Many of the youth he served, now as older adults, recall the significant influence he made in their lives, many of which were life changing. Jack and Marjorie served as church service missionaries for fifteen years.
Jack continued to play his trumpet throughout his life. In his later years, he found great joy in making music and sharing the lessons he had learned in life with others, speaking and playing at many events. He has been featured on local and national news, parades, TV documentaries, National Public Radio, CNN, and Music and the Spoken Word with the Mormon Tabernacle Choir. Some of his life stories have been incorporated into school curriculum materials. His children and grandchildren consider him their hero.
Jack was preceded in death by his wife, parents, four brothers, and one granddaughter. He is survived by his six children: Rosanne (Norman) Nielsen, Carolyn Markwith, Sharman Tueller, Janine Tueller Mickelson, Shayne (Pam) Tueller, and Stephen (Camille) Tueller, twenty-six beloved grandchildren and twenty-nine great-grandchildren.
Funeral services will be held Saturday, August 20, 2016 at the Canyon Park Ward, 1190 E. Bountiful Hills Drive, Bountiful, UT. Visitations will be held at the church the evening before, 6:00-8:00 p.m. and 10:00-11:30 a.m. prior to the funeral service at 12 Noon.
In lieu of flowers contributions can be made to the LDS Church General Missionary Fund. Online condolences at www.serenityfhs.com
To plant trees in memory, please visit our Sympathy Store.
Published by Deseret News on Aug. 18, 2016.
MEMORIAL EVENTS
Aug
19
Visitation
6:00p.m. - 8:00p.m.
Canyon Park Ward
1190 E. Bountiful Hills Drive, Bountiful, Utah
Aug
20
Visitation
10:00a.m. - 11:30a.m.
Canyon Park Ward
1190 E. Bountiful Hills Drive, Bountiful, Utah
Aug
20
Funeral service
12:00p.m.
Canyon Park Ward
1190 E. Bountiful Hills Drive, Bountiful, Utah
Funeral services provided by:
Serenity Funeral Home of Bluffdale
GUEST BOOK
Sponsored by Serenity Funeral Home of Bluffdale.
15 Entries
I am blessed to have been given the opportunity to serve Jack and Marjorie Tueller, they have forever made a lasting impression of Love in my life.
Kelly Lloyd
August 30, 2019
I was blessed to have been associated with Jack Tueller for a number years while he was the leader of the YMIA in the Falls Church,VA Ward. I was one of his counselors/assistants. I loved him like my own father and sometimes more because of our association. Obviously, we lost contact over the years but I could never forget him and as a pilot for United Airlines, I was always thinking of his life as a fighter pilot (an ace and no bullet holes in his P47). He had a huge influence on my life and I will remember that forever. He was and always will be, my hero.
David Judd Stoddard
La Grange, Wyoming
David Stoddard
August 27, 2016
JACK WAS AN OFFICER AND A GENTLEMAN. ONE OF THE NICEST PEOPLE YOU COULD EVER MEET.
HE LOVED HIS WIFE AND FAMILY AND SPOKE OF THEM. IT WAS AN HONOR TO KNOW A TRUE HERO.
GALEN SCHATZMAN
August 22, 2016
GALEN SCHATZMAN
August 22, 2016
What a wonderful funeral! It was so special to hear each of you children express the love and devotion you have for your father, especially when you referred to him as your hero. I can see why he was so proud of each of his children, grandchildren, and great-grandchildren. What a beautiful posterity!

He was a very special hero of mine in my young life. I loved him and his brother, Bob, so much. They were my baby sitters when I was very young. Then they were called to serve in World War Two. They wrote home telling us of some of their experiences and we followed the news of the war with a great deal of anxiety. We loved them, worried about them, prayed for them, and were so relieved when they returned home.

We were thrilled whenever they attended the Tueller reunions, especially when they played in the band while the rest of the relatives danced in the old skating rink at Ideal Beach in Bear Lake.

I haven't had the privilege of knowing his family since we have grown up and grown away from each other. But I remember how thrilled I was each time I had the chance to see him and Aunt Marge at funerals. etc.

My sister, Marian, and I appreciated seeing the television presentation of his life and the displayed mementos.

May God continue to comfort and bless all of you.
Louise Johnson
August 20, 2016
Mr. Tueller was such a kind and enthusiastic man. We had a school fieldtrip at the Bountiful Park two years ago and he shared his passion about America and loving one another. I was so touched by his goodness. I am sorry for your loss and also so grateful we got to meet him and be influenced by his happy soul!
Morris Family
August 19, 2016
Jack was such a blessing in our family. I have magical memories of sitting in our backyard, listening to those beautiful big band melodies wafting through the air. We will miss his stories, music, optimism and enthusiasm. We are happy that he has been reunited with his beloved Marjorie. Love to all your family.
Jennifer Jensen
August 19, 2016 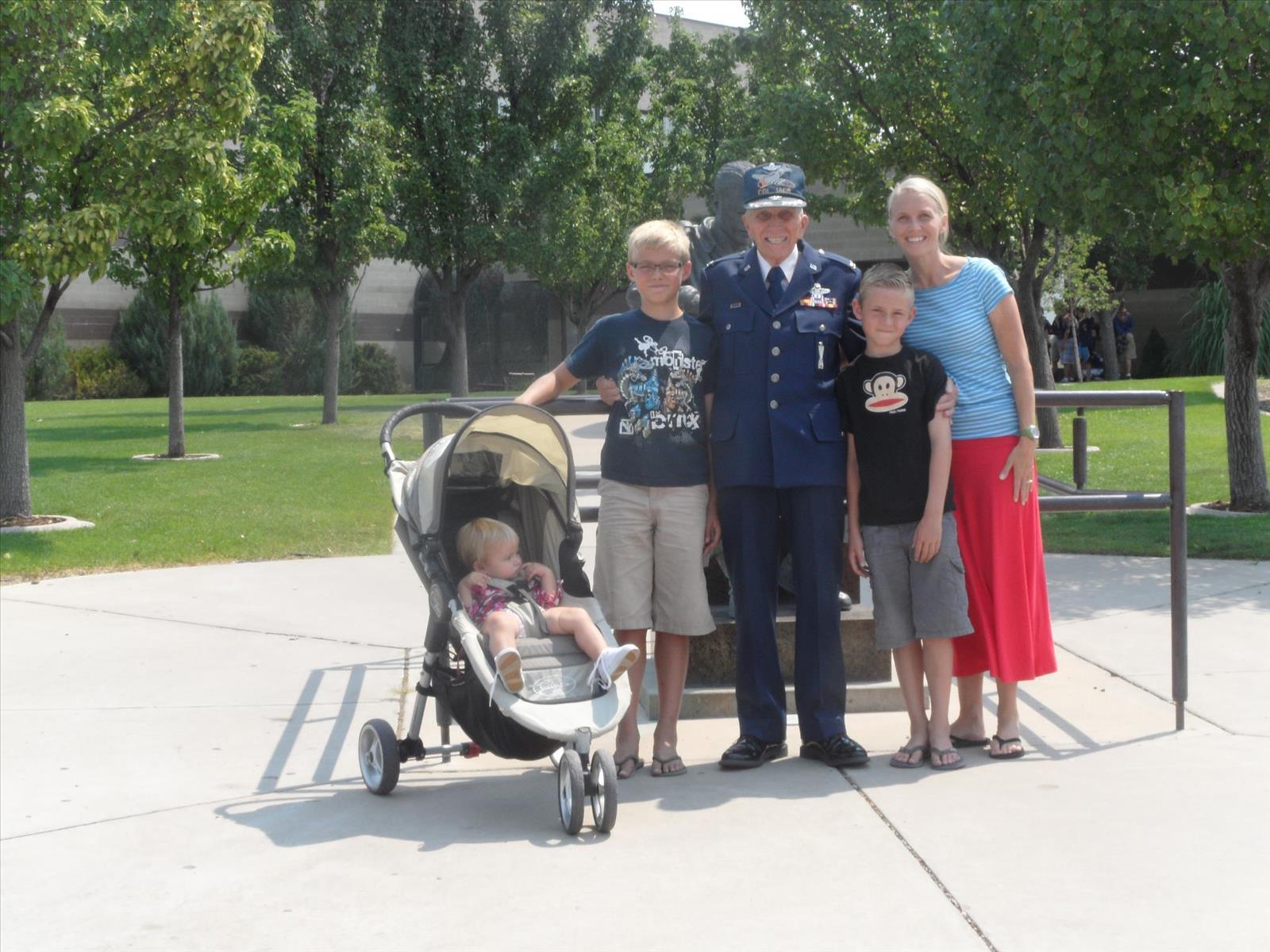 Jack and I became acquainted five years ago when he stopped to talk to me and my infant daughter at China Star. I'll never forget it was December 7 (Pearl Harbor Day) and Jack was wearing his favorite hat (Colonal Jack). He spoke to me about Marjorie and his time in the Air Force as a fighter pilot. I was so intrigued with his stories and the peace I felt around him that I looked him up a few days later and asked if we could visit some more. He was gracious as ever and accepted.
Each time I visited with Jack he taught me some very valuable lesson. He was the smartest, wisest, most humble man I have ever known. He truly loved and served his fellow man. He saw each of us as precious children of God. He always made time for others.
Jack has always reminded me of the character Eli in the book, "You are Special." That is how he always made me feel. Each time upon leaving him after a visit, I always felt like I wanted to be a better person because of his example.
Although I will miss our visits, I am so happy he has been reunited with Marjorie and his beloved angel mother. Thank you for sharing him with me. I only wish I had met him sooner. He truly was one of the greats!! Yours Sincerely, Aubrey
Aubrey Vanderlinden
August 19, 2016
Dear Tueller Family I am sorry to hear that the Coloniel Jack passed away. I work for Col Jack 83-87 he was great one and gave so much to this country, he had stories that I could listen to all day, Col jack was one tough guy, and I had the up most respect for him. the last few years I would see the Colonial at the doctors office

Tim Yeates
Tim Yeates
August 18, 2016
Thank you for your patriotism and services for our great country! And your wonderful music too. You are making a difference even from passing away as some say. ❤ God bless you and all my condolences.
Light. Love and Joy in all thee land!
Carol -Crosby-Ferges Christensen
Carol-Ferges CrosbY-Christensen
August 18, 2016
I had the opportunity to spend some time talking to Jack as he would play his trumpet. He would go up to play his trumpet and relieve the stress of taking care of his wife who suffered from Alzheimers.

I heard many of his inspiring war stories. However, my favorite were the stories he would tell of he and his wife. He was a great example of how to love your spouse even when health and memory are fading.

I know how much he loved his wife and I am sure that he is enjoying that love as she is now able to recognize him and welcome him into the next life.

Thank you Col. Jack!!
David Sandberg
August 18, 2016
Carolyn and Ryan, thinking about you during your time of loss,cherish the memories you have made to keep his spirit alive .
Teresa Remington
August 18, 2016
Dear Tueller Family:
I am sorry to hear that the Coloniel passed away.

It is with fond memories of he and your mother that bring a smile to my face. One day I was visiting Shayne & Pam at his parents house and they took me down to the basement to hear and view these huge and awesome speakers. I guess we had those speakers cranked up a little too loud and here comes The Coloniel staring at us. Needless to say, the speakers were immediately shut down and we were all quite embarrassed. He didn't say much but we knew.

It was a great time and they both always called me "Sister Shoaf" and treated me kindly.

What great parents you have and I'm sure many wonderful memories.

Hugs and love to you all,
Jane Shoaf Edge
Jane Shoaf Edge
August 18, 2016
Dear Tueller Family (Roseanne, Carolyn, Sharman, Janine, Shayne, and Stephen)
I loved your Dad and Mom when they were in London, England and sometimes were our surrogate parents when my parents were traveling. Your Dad was such a marvelous person -sharing his love and talents wherever he went. May you rejoice in his wonderful life and his reunion with his beloved Marjorie. Love to you all.
Carolyn (Reiser) Smith
Carolyn (Reiser) Smith
August 18, 2016
I work at KSL, and was on Colonel Jack's Honor Flight to Washington. He was gracious enough to spend a couple of hours with me after we returned to tell his story. I was very sorry to hear of his passing, and hope he knew how much good he did that day--his story helped raise money to send many more veterans to Washington.

I went to his home that day planning to do a story on a fighter pilot who went to the WWII Memorial, and left with a story about a man, his wife, and his trumpet.

I would never expect a TV news story to accurately convey what he was like, but for anyone who may be interested, here is a link...I hope he felt like we did him justice.