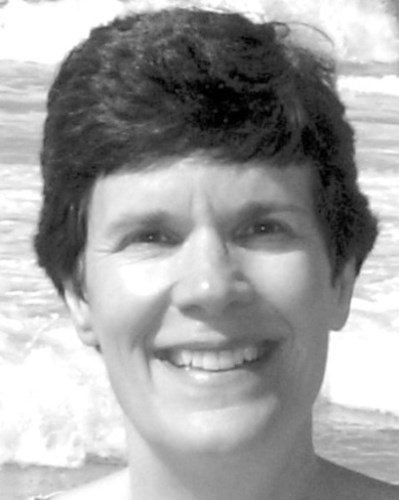 Laurie Ann Boll Brimley
1952 - 2013
Laurie passed away unexpectedly, surrounded by her family on Oct. 4, 2013. She was born on Feb. 12, 1952, to Frank Douglas Boll and Gloria Grace Carter Boll in Salt Lake City.
Laurie is survived by husband Bill, son John, sisters Sue Kirkpatrick (Doug), Julie McCarthy (Lindsay), brother Steven (Mary), and many nieces and nephews. Her son John was the light of her life. She was crazy about that kid.
Laurie did not let her heart problems slow her down. Rather than giving up, she confronted and overcame their limitations on her life. She never complained about her health. She was a brave woman who was determined to make her world and her family's world a better place. And she did.
Laurie was an avid reader who also enjoyed hiking, biking, and yoga. She loved singing and performed with the Salt Lake Symphonic Choir for several years.
She had an adventurous spirit and liked to travel. Notable examples were living in another country and the cross country camping trip that didn't end until she ran out of money.
Laurie graduated as the Salutatorian from South High School in Salt Lake. She attended the University of Utah, where she received Bachelors and Masters degrees in Education, and a Bachelors degree in Mathematics.
Her work life was varied. She taught school in Australia and Utah. She was an educational consultant for Harper and Row Publishing. She retired from Primary Children's Medical Center where she was a data analyst.
Laurie had a good sense of humor and was always fun to be with. She was very out- going and was always ready to help a friend.
Laurie was an organ donor and in her passing, she will be able to help someone else one last time.
Donations to Primary Children's Medical Center in Laurie's name are encouraged.
Online condolences may be shared with the family at www.jenkins-soffe.com
Published by Deseret News on Oct. 13, 2013.
To plant trees in memory, please visit the Sympathy Store.
MEMORIAL EVENTS
To offer your sympathy during this difficult time, you can now have memorial trees planted in a National Forest in memory of your loved one.
MAKE A DONATION
MEMORIES & CONDOLENCES
15 Entries
You will be missed by all your friends at CPAS.
October 22, 2013
Julie, I just saw this tonight. I am so sorry to read about Laurie. She sounded like a very talented, wonderful person and I'm sure she was a great sister to you. I'm so sorry.
Keri
October 16, 2013
Laurie brought a sense of peace and joy wherever she went. Her life affected all those around her in such an unassuming way. What a beautiful legacy to leave to the World.
DayValena Colling
October 16, 2013
I am sure that Laurie will be remembered by most everyone from her high school class, she was a friend to all. It's no wonder that she went on to accomplish great things throughout her life. Warm regards to her family at this difficult time.
Connie Godfrey Mascherino
October 15, 2013
Julie and Family, we are so sad to read about the passing of your sister, Laurie. We have such wonderful memories of singing with her in Salt Lake Symphonic, and all the fun we had with her on tour. She was a beautiful woman, and we hope you will find some peace at this really difficult time. Love to you, Bonnie and George Welch
October 15, 2013
May your hearts soon be filled with wonderful memories of joyful times together as you celebrate a life well lived.
Diane Angle Welty
October 15, 2013
So sorry to hear of Laurie's passing. We lived in the same ward/neighborhood and we hung out a lot. I have many fond memories of Laurie in YW and school. She will be missed.
See you on the other side Laurie...love you! Mary Benson Bendixen
Mary Benson Bendixen
October 15, 2013
I went to South High School with Laurie and saw her 6 years ago while skiing with my wife one winter morning. I went back to the lodge, where Laurie was reading a book......she had already left!!! I was going to say "hello, etc"....now I feel bad
George Loertscher
October 15, 2013
I am one of Laurie's High School friends, and I wanted to tell you what a wonderful person she was even way back then. She made such a possitive impact on my life, and I can see from reading her obituary that she went on impacting lives ALL of her life. What a bright star! I am sorry for your loss and all of ours. Prayers to you.
Love, Yvonne Bonzo Eisenmann
Yvonne Eisenmann
October 15, 2013
I always enjoyed seeing Laurie at yoga; her smile and great attitude will be missed by many! Our thoughts are with you in your loss.
Amy
Amy Lichthardt
October 14, 2013
I am sorry for your loss.
Clayton
October 14, 2013
Julie and family,
My heartfel sympathy for you at this time. May you find peace in the memories you have of Laurie and no she will be watching over you.
Pam Buhrman Sorensen
October 13, 2013
Laurie was a beautiful lady and I can't imagine how much you will all miss her. The Boll family was an important part of my junior high and high school years. My prayers go out to you all.
Margo Chapman
Margo Chapman
October 13, 2013
I don't think I've seen Laurie since High School but even then she was one of the nicest people I knew. I'm so sorry for your loss.
Charlotte Warr Andersen
October 13, 2013
Steve and family, So sorry to read of Laurie's passing. It is very difficult to lose a family member and my heart felt condolences go out to all.
Mary Anne Hyde
October 13, 2013
Showing 1 - 15 of 15 results