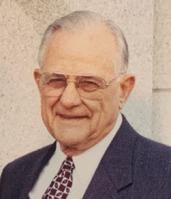 Lyle J Martinsen, beloved husband, father, grandfather, great-grandfather, uncle, and friend passed away on Sunday, October 10, 2021, due to natural causes. He was born December 10, 1927, in Vernal Utah to George Henry Martinsen and Sarah Mariah Hatch. He married Lora D Stewart on Feb 12, 1952, and they were sealed for time and all eternity in the Salt Lake City Temple.

Lyle served at the end of World War II in the US Navy. He served in Guam and Pearl Harbor as a talented machinist and was assigned to big ship engine rooms. His love for God and country ran deep as you could often see him stop and salute the flag.

Lyle was raised in a large family in Vernal, Utah. He was the 9th of 10 children. Following High School, he worked in the oil field and later joined the US Navy; after serving honorably, Lyle and his brother Dal purchased and operated a sawmill near Vernal, Utah. He later worked for the United States Government with the Bureau of Reclamation. He test-drilled many dam sites including the Flaming Gorge Reservoir. He later moved to Salt Lake City, Utah to work for Boyles Brothers Drilling Company. It was there that he designed, engineered, and revolutionized the core-drilling systems for the mining industry which are still used worldwide. His engineering talents led to 21 patents including the Softalk telephone shoulder rest product.

Lyle resided in Murray, Utah for 62 years with his wife, Lora D Stewart Martinsen and 5 children, whom he cherished. He found great joy in his children and grandchildren and often said, "Family is everything". Lyle had a strong testimony of the restored Gospel of Jesus Christ which was his foundation for living. He devoted many years of service in multiple church callings, serving as Bishop twice in the same ward, and in a Stake Presidency and later as Stake President of the Murray Utah, South Stake.

Lyle is proceeded in death by his son Dan, his granddaughter Lacy, his grandson Justin Elliot (Big Justin), his grandson in-law Eric Wiseman, his nine siblings and his parents. He is survived by his wife, Lora D, his children: Stewart (Debbie), Dan's wife (Sandra), Lynette (Tom), Lane (Tara), LaDawn (Mathew), his 22 Grandchildren, and 50 Great Grandchildren whom he adored.

Online condolences and broadcast services will be available at the funeral home website www.jenkins-soffe.com