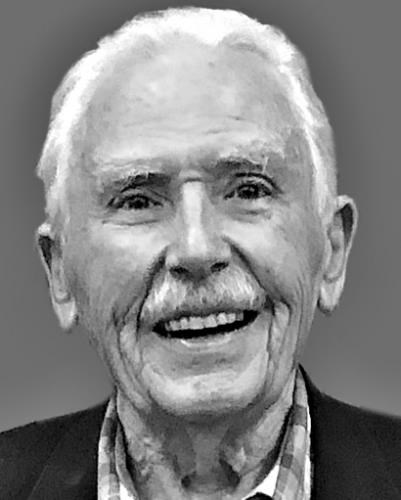 BORN
1928
DIED
2020
FUNERAL HOME
Walker Sanderson Tribute Center
646 East 800 North
Orem, UT
Born May 30, 1928 ~
Died March 28, 2020
Monroe Gunn McKay passed peacefully, of age related causes, on March 28th, 2020. He was 91 and had been residing with his daughter. He was a Judge on the U.S. 10th Circuit Court of Appeals.
Monroe was born in the McKay family home in Huntsville, UT, on May 30th, 1928. He was the third of eight children born to James Gunn, and Elizabeth Catherine Peterson McKay. The family ran sheep in the area surrounding Huntsville and Monroe loved to recall his robust days as a sheepherder. Monroe's siblings are; Koln Gunn McKay (former Congressman from UT), Quinn Gunn McKay, Barry Gunn McKay, Anne McKay Downs, Mary McKay Stirland, Elizabeth McKay Seamons, and Williamena McKay Richardson.
Monroe served in the US Marine Corps from 1946-1948. He served as a missionary for the Church of Jesus Christ of Latter-Day-Saints in South Africa from 1950-1952. After working briefly as a teletype mechanic, Monroe was persuaded by his brother Quinn to attend college. While at BYU, he met Lucile Ann Kinnison and they were married on August 6th, 1954. Monroe became Student Body President during his last year at BYU and graduated with a Bachelor of Science in 1957. He graduated from University of Chicago Law School in 1960, after which he moved his family to Mesa, AZ to clerk for Hon. Jesse A. Udall. In 1961, he joined the law firm of Lewis and Roca in Phoenix.
In 1966 Monroe and Lucy took their family to Malawi, Africa where he served as director of the Peace Corps until 1968. The family then returned to Mesa and Monroe resumed his legal practice. In 1974, he took a position teaching at Brigham Young University Law School. On Nov. 2nd, 1977 he was nominated to the U.S. 10th Circuit Court of Appeals by President Jimmy Carter and joined the court on December 1st, 1977. He served as Chief Judge from 1991-1993. At the time of his death, Monroe was still actively hearing cases in the 10th Circuit.
After taking senior status with the Court, he and his wife Lucy served a mission for the Church of Jesus Christ of Latter-Day-Saints from April 1996 to August 1997 in Durban, South Africa. After their mission, the couple enjoyed time with their 9 children, 31 grandchildren, and ever-increasing number of great-grandchildren, to whom he was "GG Pop". Lucy passed on August 8th, 2013.
Monroe is survived by his children; Valerie McKay Nash (Harry), Michele McKay Elison (Jeff), Margaret Lynn McKay, James Kinnison McKay (Lyn), Melanie McKay Edmunds (John), Nathan Kinnison McKay (Julie), Bruce Kinnison McKay (Callie), Lisa McKay Hiatt (John), and Monroe Gunn McKay II (Summer). Plans for a public memorial service are pending. In lieu of flowers, because of current conditions please donate to your local Food Bank or Blood Bank.
Condolences can be left at www.walkersanderson.com
Published by Deseret News on Apr. 5, 2020.
To plant trees in memory, please visit the Sympathy Store.
MEMORIAL EVENTS
To offer your sympathy during this difficult time, you can now have memorial trees planted in a National Forest in memory of your loved one.
Funeral services provided by:
Walker Sanderson Tribute Center
MAKE A DONATION
MEMORIES & CONDOLENCES
Sponsored by Walker Sanderson Tribute Center.
8 Entries
Wanted to let Meg (whom I knew at ASU) know that I ran into Judge McKay in 1982 at JRC Law School and had a delightful visit with him. He had a war story about conducting his defense at trial from within his client's jail cell. He remembered my grandfather, his firm being on the other side of a lawsuit, and when talking admiringly about my great grandfather, Lot Smith, described himself as "just a pale imitation."
Jared Smith
Acquaintance
April 14, 2020
Monroe was my mentor, colleague, and good friend from the time I joined the court almost 40 years ago. He was always intellectually curious and a wonderful combination of academic theoretician, seasoned practitioner, and down to earth realist with strong convictions. He loved being a judge because, as he once said, it allowed him "to play a role in the evolution of our society, to try to resolve disputes, and to write principles that will not only resolve disputes fairly but will also help people in shaping their lives." He made me think and he often made my laugh. I will miss him greatly.
Stephanie Seymour
April 7, 2020
Stephanie Seymour
April 7, 2020
We loved having him speak when he was on the High Council of the Maricopa Stake in Mesa Arizona-always interesting
NANCY DARIEN
April 6, 2020
I had the privilege of clerking for Judge McKay in 1980-81. He was a dedicated judge, a delightful person, and a wonderful mentor and friend. I extend my heartfelt condolences to the family.
Jim Gordon
April 6, 2020
Loved Uncle Monroe. He was a BIG comfort and blessing to my mother. I feel a void at his passing. Know of my love for your family at this time and always. Love, Andrea
April 5, 2020
I had the great good fortune of clerking for Monroe in 1988-89. At the time we lived only a few blocks from each other in Edgemont, so for that entire year he "held forth" on everything from politics and law to religion and duty during our commute to and from SLC. In Chambers we clerks called him "TJ" (the judge"). That entire year TJ challenged and expanded my thinking; he gave me time to puzzle through knotty legal issues and trusted my legal judgment far more than I trusted it myself. Years later, at a time when all I wanted was the comfort of a familiar routine he refused my plea to become his "permanent clerk" saying he would not let me settle for less than I could be. When I was appointed to the bench in my own right, he became a supportive and trusted friend. Monroe taught me that being a judge is both a privilege and a responsibility. He was a great mentor, role model, and life-long friend. He'll forever be "my judge."
Denise Lindberg
April 5, 2020
Denise Lindberg
April 5, 2020
Showing 1 - 8 of 8 results