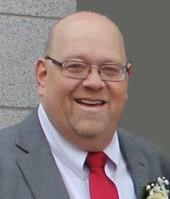 Reed Richard Cowan passed away this past Saturday morning, October 9, at the age of 56 following a period of declining health.

The son of Richard and Dawn Cowan, Reed was born in Provo on August 2, 1965. While attending Wasatch Elementary School, one of his teachers called him her "sunshine boy." Because this nickname fit Reed's friendly and optimistic personality, it stuck. Reed graduated from Provo High School where he made many friendships which have lasted through the years.

Always inquisitive and eager to learn about everything, Reed developed an interest in aviation. During his high school years he participated in a youth auxiliary of the Civil Air Patrol and enjoyed the assignment to use colored flags to direct in-coming aircraft during an air show at the Provo Airport.

Reed was fortunate to be in a Boy Scout troop led by a Scoutmaster recognized as No. 1 by the Church of Jesus Christ of Latter-day Saints. He was proud to have attained the lofty rank of Eagle Scout.

While attending the College of Eastern Utah in Price, Reed was involved in a serious automobile accident that eventually resulted in his losing his left foot. He didn't let this injury get him down. He accepted a call to serve as a missionary in the Church's England Coventry Mission. Concerning the British dialects he encountered, he quipped that those who insist that England is not a foreign mission don't know what they are talking about.

Upon returning home, Reed married Pam Elkins of Provo. She had been a missionary in New Zealand while he was serving in England. They were married in the Provo LDS Temple on February 10, 1989, and became the parents of three children—Becki, Amber, and Zachary.

Reed loved his family and enjoyed attending school, church, and other events in which his children participated. In recent years, "game nights" in which family members noisily yet joyously crowded around a table game became favorite events. Many associates enjoyed and appreciated his fun-loving personality yet caring friendship.

While working for Southwest Air Lines, Reed enjoyed taking advantage of opportunities to fly to destinations around the west. He also worked for United Parcel Service in their Orem hub.

Reed continued to have many interests. He was a loyal Cougar fan and attended many football games before the pandemic made that impossible. He enjoyed seeing vintage airplanes, especially from World War II, and often traveled to air shows in the area. He helped organize what became the Lego Users Club in our area and enjoyed creating vehicles, figures, and other objects from the tiny bricks.

He continued to be active in the Church of Jesus Christ, typically serving as a teacher in priesthood quorums and Sunday School, often with his wife Pam.

During most of the 32 years of their married life, Reed and Pam made their home in West Provo. Only recently, however, they moved to West Jordan where they could be closer to their children and to Pam's employment.

In addition to losing his foot, Reed battled a number of health challenges including diabetes and limited kidney function, which required him to receive dialysis. During this past summer, he appeared to be losing strength and slowing down. On Tuesday evening last week, his strength had slipped to the point that he could hardly stand, so he was taken to the emergency room at Jordan Valley Regional Medical Center. The decision was to keep him in the hospital for observation. His condition worsened, however, culminating with his death Saturday.

Reed Cowan is survived by his wife Pam of West Jordan; by his children Becki (Zach) Rogers of West Jordan, Amber (Thomas) Olsen of Alpine, and Zachary also of Alpine; by his parents, Richard and Dawn Cowan of Provo; and by his siblings, Sandra (Angelo) Rodriguez of Lehi, Linda (Aaron) Gerber of Raleigh, North Carolina, Lee (Marnie) Cowan of Provo, Tricia of Orem, and Donna (Nolan) Coleman of Springville. These family members and many friends mourn his passing and believe his mortal life ended way too soon.

-
Published by Deseret News from Oct. 13 to Oct. 14, 2021.
To plant trees in memory, please visit the Sympathy Store.
MEMORIAL EVENTS
Oct
16
Viewing
9:30a.m. - 10:45a.m.
Willow Grove LDS Church Building
Oct
16
Funeral service
11:00a.m.
Willow Grove LDS Church Building
Funeral services provided by:
Cannon Mortuary
MAKE A DONATION
MEMORIES & CONDOLENCES
Sponsored by Cannon Mortuary.
1 Entry
I had the grand privilege of assisting Reed while he was on dialysis. As a Ute fan, we bantered quite a bit and laughed A LOT! Reed loved my corny, dad jokes and I marveled at his perseverance in dialysis treatments. Reed was one of a kind and I will miss our serendipitous meetings at Winco. Many condolences and support during this difficult time of loss. Though, I don't think his spirit will be too far away; he loves his family so much.
Mindy Sutton
October 15, 2021
Showing 1 - 1 of 1 results