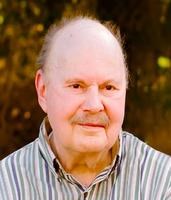 On Sunday, September 19th the world got a little less brilliant. Our father, lover of all things green, left this world to return to his heavenly home. Ronald Francis Titcomb was born on July 28, 1940 in Salt Lake City, Utah. He was the oldest of three children born to Francis S. and Veona R. (Sorensen) Titcomb.

Dad grew up in Magna, Utah. We like to think he thrived, despite the taste of the water. He met and married Tonga Seely in 1963 in the Manti Temple. Dad was an active member of The Church of Jesus Christ of Latter-Day Saints. He served in many callings but one of his favorite was that of librarian. It was an unexpected calling for those who knew Dad, but he held it for 17 plus years and faithfully served in the Bennion 2nd Ward, fulfilling library needs, learning the art of socializing and copying!

Dad wanted to get a college degree and had aspirations for great things. But, his dad died early in his life and had reserved a place for him at Kennecott Mine where he had worked as well. With a sense of duty to family and helping out, Dad assumed the role of provider! His work life was devoted to Kennecott Mine for 43 years. As kids, we remember looking up to the tallest mountain in the western horizon of Utah and seeing the Kennecott building and Mom would say "There's Dad, up there on that mountain". We were proud of our Dad for his dedication to waking up every day, rain or shine, to trek up that mountain to fill many positions for Kennecott, including supervisor. Despite all of the difficulties, Dad realized his dream of going to college in the end. He attended University of Utah and Salt Lake Community College.

When Dad wasn't working, he was relaxing. If there was a recliner, you would find him in it. Even though he loved to be in the outdoors, he loved his recliner more. He found his peace in watching a good cartoon or nature show while resting his body in a softly padded chair that let him relax the way nature never intended. And when he wasn't reclining, he was reading. A Louis L'Amour paperback was practically welded to his hand. Science fiction and cowboys owned Dad's imagination. Paperback novels could be found stuffed in every pocketed opening of car doors, pants pockets and motorhome nooks and crannies. A pair of sunglasses, a container of mints and caramel candies and some books and he was set for life!

Every fourth of July, Dad was dedicated to fireworks. Even if he worked late, us kids were allowed to stay up into the wee hours and wait for him to come home. Out came the blow torch and a supply of fireworks large enough to occupy a small circus. We felt like we owned the world every Independence Day and it was one of Dad's favorite things about life!

Dad was cutting edge and hard working! When we were kids, he bought a big, boxy computer. While other kids were writing school reports by hand, we were typing ours on a computer and printing them on a dot matrix printer. I think we learned expert computer skills early on having one in the house before other kids knew what a computer was. Dad taught us how to work on cars from the inside out. If he couldn't fix it, it didn't need to be fixed. And he took that same approach to home repair. His fixes might not have been the prettiest, but they worked, sometimes to Mom's chagrin. He tiled, gardened, built, welded, painted, and succeeded because he didn't see failure as an option. And through that work ethic, he taught a generation of kids and grandkids how to go out into the world and attack it like the world depended on you to make it work with failure never being an option. We can all look at Ronald Titcomb and say work ethic oozed out of him and you got up, kept up, and held up!

"Do not let yourself be bothered by the inconsequential. One has only so much time in this world, so devote it to the work and the people most important to you, to those you love and things that matter. One can waste half a lifetime with people one doesn't really like, or doing things when one would be better off somewhere else." –Louis L'Amour

Dad is preceded in death by his parents, Francis S. and Veona R. (Sorensen) Titcomb, and by his sister Billie B. Hansen.

The family would like to thank Elevation Hospice of Utah for their kindness and dedication in the last months of Ronald's life. -

Published by Deseret News from Sep. 21 to Sep. 22, 2021.
To plant trees in memory, please visit the Sympathy Store.
MEMORIAL EVENTS
Sep
23
Viewing
12:30p.m. - 2:00p.m.
6100 South Kamas Drive, Taylorsville, UT
Sep
23
Funeral service
2:00p.m.
6100 South Kamas Drive, Taylorsville, UT
Funeral services provided by:
Jenkins-Soffe Funeral Home & Cremation Center - South Jordan
MAKE A DONATION
MEMORIES & CONDOLENCES
Sponsored by Jenkins-Soffe Funeral Home & Cremation Center - South Jordan.
1 Entry
Dear Tonga and family, My mother, Joanne Cooper and aunt Dorothy Titcomb were "double cousins " with Ronnie, Tommy and Billie. Throughout the years they reiterated many entertaining stories about life in Magna with Uncle Francis and Aunt Vee. As they grew older they looked forward to conversations with Ron. He kindly drove them to funeral services at the Yellow Church in Sanpete and they always enjoyed just "visiting with him" I also heard stories of the kindness he extended to their Aunt Edna Schwenk. He was a"good guy" and was certainly loved by our branch of the family. May God Bless you and Keep you, may he let his light shine upon you, and give you peace. Take good care of yourselves. Love Linda Cooper
Linda Cooper
Family
September 21, 2021
Showing 1 - 1 of 1 results