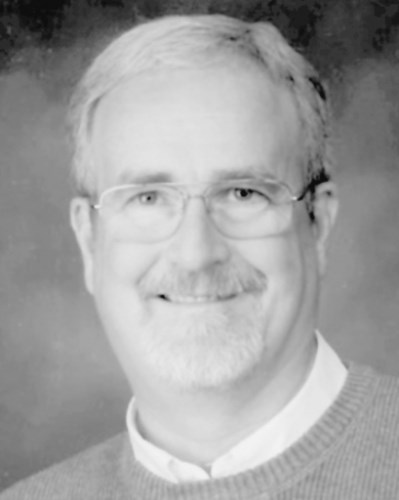 FUNERAL HOME
Goff Mortuary
8090 S. State St.
Midvale, UT
Thomas Frank Seal
1953 ~ 2013
Thomas Seal passed away unexpectedly on September 10, 2013 while enjoying one of his favorite pastimes in the Wasatch Mountains.
Thomas was born on December 24, 1953 to Carol Grace Callicott and Frank Lowe Seal. He made a big first impression weighing in at 13 1/2 pounds, continuing from that day on being larger than life in every aspect, leading others by his example and energy. As a youth he enjoyed singing and music, which continued through his life. He was the drum major for his school band, leading and ensuring that everyone stayed on beat. Graduating from Brigham Young University with a degree in computer science, he quickly began influencing the translation field with technology and business savvy. Work endeavors took him all over the world making many friends and influencing many people. However, his greatest accomplishments occurred in his adult years. He took the role of family patriarch very seriously and fulfilled that calling with tireless energy. He married his eternal soul mate Beverly on Feb. 25th, 1982 and sealed in the Jordan River Temple Dec. 28th, 1988. He continually set an example by showing love and concern for her well being and happiness. His 4 children and 22 grandchildren are the light of his life. Keenly aware of the needs of his children and grandchildren, he frequently sacrificed time to help, support, spoil, and love them. We will miss him dearly. We will forever enjoy and remember him as our husband, father, dad, grandfather, brother, and friend.
Thomas is preceded in passing by his father, Frank Lowe Seal, and his mother Carol Grace Callicott Seal.
He is survived by his wife, Beverly E. Seal; 4 children: Liz Oliphant (David), Brandon Burt (Misti), Kimberly Shupe (Erik), Richard Seal (Julie), and 22 grandchildren; brothers, Gregory Seal (Suzanne), David Seal (Julie); sister, Maureen Gold (Spencer).
The Seal Brothers Trio lost their "Bass." Thank you for your wonderful life.
Funeral services to be held Saturday, September 14, 2013 at 11:00 a.m. at the South Jordan River Stake, 1570 West 11400 South. A viewing will be held Friday evening from 6:00-8:00 p.m. at the church and from 9:30-10:30 a.m. prior to the services on Saturday. Interment, Wasatch Lawn Cemetery.
In lieu of flowers, the family suggests contributions to the LDS Church Missionary Program. www.goffmortuary.com
Published by Deseret News from Sep. 12 to Sep. 13, 2013.
To plant trees in memory, please visit the Sympathy Store.
MEMORIAL EVENTS
To offer your sympathy during this difficult time, you can now have memorial trees planted in a National Forest in memory of your loved one.
Funeral services provided by:
Goff Mortuary
MAKE A DONATION
MEMORIES & CONDOLENCES
40 Entries
I think about Tom often and tell stories about him to school districts all over the country. They find it almost impossible to believe that we built our own word processors, spread sheets and data bases back then so that they could seamlessly integrate into the courseware. Tom, and the people he hired, convinced me that it would be not only possible to do that but that we would have tools that were more attuned to student learning than the very rudimentary tools on the market back then. Then there was networking. Both Apple and IBM told us that there would never be a demand for networked computers. Tom found Sperry, who had disagreed and was willing to sell us computers. The first task was to connect the offices together because customer service was across the street. I cannot remember who came into my office one day but she said that the telephone man wanted to speak to me. He wanted to know about the wire wrapped around the phone wire that went from our office to the offices across the street. That had been Tom's solution and the phone guy had never heard of such a thing. We gave him a tour of the office, looking at the products being developed and he said I think I will just look the other way. Then there were the defective hard drives in our servers that were crashing in many of our sites and we could not figure out why and did not have the money to send people out to all of the sites. Tom and Art I think figured out the problem but it almost put us out of business because Sperry took a long time to acknowledge it. And finally there was our first installation in Maryland - just outside of DC. We never had the money to actually boot up 30 computers at once in the office and this was our first try. It took 8 hours. I think that Herman Post and Dennis, our Renaissance man, were on site and Paul, Tom and Art sat down to figure out how to fix it. I may remember this wrong but their first solution was to boot up about 3 to 5 computers every half-minute and that got it to about 5 or 6 minutes. They then did a software fix that put more information on the floppy disk instead of the server. When I tell that story to school people, they look at me like I am some kind of time traveler visiting from the past or even a different planet. A few years ago I got an email from man in his 40s. He took the time to write because the products developed back then were so instrumental in his life and then went on to describe the features he loved. Tom became a good friend during those days and he lives on in stories often told to people he would have never met.
Richard Erdmann
Work
September 6, 2021
Dear Beverly and family, I as many others had the pleasure of visiting with you and Tom at the HHS reunion. Tom was a great guy with a huge personality and fun to be around during school. The legacy of family displayed at his viewing was beautiful. I pray that your days will get easier and memories pull you through the tough times.

Sheila Heath McDonald
September 25, 2013
Bev, LuReen Brock just called me and told me about the passing of your husband, Thomas. The last time I saw you was when John and I married back in 1992. What a shock to hear that it happened so suddenly, I'm guessing it was a heart attack. I'm so sorry; he was so young. John will probably send you a note as well. I'm still at Kennecott, now at Daybreak. If I can be a listening ear, please give me a call.
Laura Lauber
September 18, 2013
We love you and Tom, Beverly. You're in our prayers this week. Thank you for your wonderful example of eternal love. Your love for each other has always been inspiring. Our hearts were so saddened with the news of tom's passing, but comforted knowing you'll always be together, and that we'll all be able to see Tom again. With love and gratitude to you both. JMarsh
September 16, 2013
Beverly Just wanted you to know how much you all mean to me my thoughts and prayers are with all of you I know he was the love of your life .He is still and all ways will be your best friend and precious love. love always Trudy Gerrard
September 16, 2013
Beverly & Family, Our deepest sympathies. Tom was one of our very friendly neighbor and will always miss his gentle gesture...

Gary & Barbara Lloyd
September 12, 2013
Bev, I was so shocked and upset to hear the sad news. I've hardly stopped thinking of you and your family since then.

You and Tom made such an impact on me and on many others over here and that legacy will outlive us all in the lives you have touched and enriched.

I have nothing but fond and positive memories of a strong, clever, witty, kind and faithful man.

I have been touched by the other messages that have been left here and I really hope that you will find comfort and strength from them.

With much love to you and all the family, Denise xx
Denise Kearns
September 12, 2013
Bev and family, please accept our deepest sympathy at this difficult time. Tom was an amazing man - one of the best I've ever known. I look back on many years of working with him as well as foreign and domestic golf adventures filled with many fond memories. We wish you much love, peace and comfort in the days ahead. John and Patti Wittwer
September 12, 2013
Bev,
SHOCK - that is the only word I can think to say. I am so very sorry to hear of Tom's passing. I am greatful I got to see him last Saturday night. So many old friends, so many great memories. We did have a wonderful time.
Please know you and your family are in my thoughts and prayers. I pray God will bless you all and give you strength at this very difficult time.

Thank God for our Memories!

Much Love
Kathy Erdmann
Kathy Erdmann
September 12, 2013
Bev and family. I was saddened to hear of Tom's passing. What a wonderful man he is. My thoughts and prayers go out to you. I love you all and pray for comfort in the coming days and weeks.
Debbie Cheney
September 12, 2013
Brandon, Misti & Family - We are so sorry for your loss. You are in our thoughts and prayers.
Tom & Kim Sankovich
September 12, 2013
Beverly,
We were so sorry to hear of Tom's (that is what he went by in school) passing. We had such an enjoyable time with you and Tom at our class reunion Saturday night; little did we all know it would be his last reunion. Talking to him I know his family meant so much to him, and he was so proud of his children and especially his grandchildren. He told me his heart melted when a grandchild would come into the room run to him and hug his leg so excited to see him. These memories will be treasured forever!
Sandy Wengren) & Jerry Moon
September 12, 2013
He was more than a boss, he was a friend and a father figure. His booming voice will be missed in the halls of the office. All my prayers and best wishes to Bev and their family.
Kirk Baumgartner
September 12, 2013
Love you "Uncle" Tom and "Aunt" Bev.
Eichelle (Shelly) Jenkins
September 12, 2013
Bev, I wish I could find the words to express how sorry I am that your sweet, crazy Frank has gone. He will be so lovingly watching over you. Please keep living the adventure, and find how strong and amazing you can be. You make us all proud. You will be together again.
Marci Hardy
September 12, 2013
My heart is so heavy to hear the news of Tom's passing. Such a wonderful man. Knowing him was such a blessing to me and my husband. He will truly be missed. Our prayers go out to Beverly and the family.
Terry & Shelia Webb
September 12, 2013
Showing 1 - 40 of 40 results