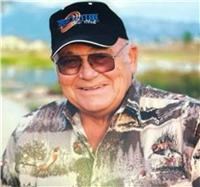 Tom was loved by many, and always had a warm smile and a great story for those fortunate enough to spend time with him, be it on the job, on the water, in a duckblind, on the sidelines of a game or over a hearty meal, his stories were infamous & abundant.

Born to Miles H. and Dorothy Richards Underhill in Ann Arbor, Michigan on September 26, 1939. He was the oldest of three children. From farming & trapping, to baseball & football, he was an outdoorsman & sportsman from the beginning. Tom, along with his brother Paul, both starred on their high school football team…one of his fondest memories. After graduating from High School in 1958, he left the small town of South Lyon Michigan for the University of New Mexico to study Civil Engineering with hopes of continuing his football career. Unfortunately, after being injured in a practice game his hopes of playing in the NFL came to an end.

Tom, ever the avid outdoorsman, traveled the world to explore its fishing and hunting opportunities; adventuring in places such as Africa, Alaska, Newfoundland, Baja, Mexico and all over the US, always adding to his list of fascinating stories and catalog of good friends wherever he went. In his lifetime Tom charmed everyone from billionaire CEO's and Maasai tribesmen with the same look-you-straight-in-the-eye handshake and dry sense of humor.

Tom was always a stellar athlete and excelled at any sport he tried. From his record breaking High School career, to his numerous 1st place trapshooting & fishing trophies. He even holds a few records, including one for the giant trout he caught on the Teton River while duck hunting. (Now that's a great story…)

After Tom's athletic & engineering careers ended (including 4 different retirement parties), he turned his passion to the outdoors, his children and grandchildren. Ever the sideline cheerleader, Tom, (Bumpa to many), traveled many miles to watch his kids and grandkids participate in rodeos, horse races, cycling events, baseball, football, basketball, swimming and soccer games with the innate ability to sneak away to a local fishing hole or enjoy trap shooting with friends or family.

One of Tom's proudest moments was being inducted into the Michigan High School Hall of Fame in 2008. All of his children, sister Ellen and nephew Kevin were in attendance for the ceremony and toured the football field at his high school where a tree was planted in his honor.

He was preceded in death by his mother, father and brother, Paul (Karlene) Underhill.

Celebration of Life will be held May 26th, 2022 in South Jordan, Utah. Details to follow.

In lieu of a monetary donation, Dad would love for you to take your family fishing on a lake, river or stream and just be together… make memories that last a lifetime like he did with his family…

To all of those that think of me,

Be happy as I go out to sea.

If others wonder why I'm missin'

Published by Deseret News from Jan. 13 to Jan. 21, 2022.
To plant trees in memory, please visit the Sympathy Store.
MEMORIAL EVENTS
To offer your sympathy during this difficult time, you can now have memorial trees planted in a National Forest in memory of your loved one.
MAKE A DONATION
MEMORIES & CONDOLENCES
0 Entries
Be the first to post a memory or condolences.