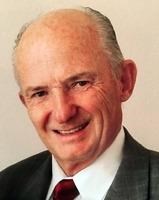 He was the first "ours" in a yours-mine-and-ours family. He was cuddled and coddled by five wonderful older siblings and adored by his little sister. He was early exposed to his dad's love of the wilds and got to go on lots of camping and sight-seeing trips. He treasured these memories all his life, including four Colorado River trips through Glen Canyon before Lake Powell existed. He continued to enjoy camping with family for the entirety of his life, especially in the mountains above Manti and in southern Utah.

He attended elementary and high schools in Manti and went on to Snow College before serving an LDS mission in the Northern States Mission.

Bill met his sweetheart, Marjorie Armstrong, at age 14. As Bill neared the end of his mission service he was sitting on the lawn of a church and said to himself, "If I could find a four-leaf clover, I'd send Marjorie a ring." That clover popped into view so quickly, it scared him! He sent Marjorie a diamond ring from the mission field and to his relief, she accepted. They were married December 27, 1961, in the Manti Temple. While they lived in St. George from 1964 through 1969, Bill and Marjorie adopted their first two children, Margaret and Douglas Clair. They adopted their third child, Matthew Paul, while living in Bountiful, Utah.

Bill attended BYU, earning a master's degree in English. He taught English at Dixie College for four years and served as the chairman of the English department. In 1969, Bill attended the University of Utah to pursue a PhD. While at the U, Bill worked full time as an administrative assistant in the office of the Vice President for Academic Affairs and later as a Program Director for the Division of Continuing Education. He was the founding Director of the U of U Davis County Program for Higher Education and was instrumental in creating the Bountiful Art Center. He was awarded a Doctor of Philosophy degree in higher education administration in 1973.

While he was directing the Davis U program, Bill began consulting part time and teaching writing for Shipley Associates. He eventually left the U to work full time for Shipley. He began teaching writing workshops throughout the United States and other countries and then moved into other areas of the company until finally serving as it's Senior Vice President until 1995.

Bountiful was home for 27 years but after retiring, Bill and Marjorie built their dream home in Woodland Hills, Utah. Here they discovered a fantastic group of friends, including "The Over The Hills Angels", who loved to explore the beautiful mountains and deserts in their RVs and on their four wheelers. In addition to exploring every corner of Utah, Bill and Marjorie explored the world together, finding adventures and friends wherever they went.

Bill loved the gospel of Jesus Christ and was a faithful member of the Church of Jesus Christ of Latter Day Saints. His testimony and understanding of the Atonement of Jesus Christ were central to the man he was. He particularly loved teaching gospel classes and served in many other church positions. He and Marjorie loved serving their mission at Heber Valley Camp where they taught campers about the many creations around them.

Bill is survived by his wife of sixty years, Marjorie Armstrong Stringham, daughter, Margaret (Nate) Millward, son, Doug (Milaka) Stringham, son, Matt Stringham, seven grandchildren and their spouses and six great grandchildren, plus an extraordinary extended family who loved and adored him, as he loved them.

Burial will be in the Ephraim City Cemetery.