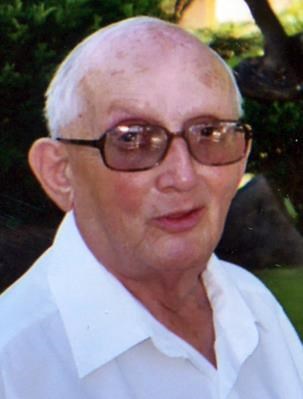 Corliss Gilchrist, was born May 7, 1925, in Ayrshire, Iowa, one of sixteen children born to James and Arrah Gilchrist. He passed away May 3, 2017, at his home in Altoona, IA. We told him the process to impeach Trump had begun - so that he could rest in peace.

Corliss was united in marriage to JoAnne Cronk in 1946 and remained a very loyal and dedicated husband through her many years of illness. He cherished his family and time spent with his daughters, grandchildren, and great-grandchildren.

Corliss was a proud union member and took great pride in his work with Armstrong Tire, retiring after more than 40 years of service. In his free time, he enjoyed fishing, gardening, tending his flowers, jigsaw puzzles, and watching the Iowa Hawkeyes. He also had a great love for animals, especially cats.

Corliss will be remembered as a loving husband, father, grandfather, brother, and friend. He was a stoic, hardworking, and simple man who had a joyful outlook on life, never taking things for granted.

Memorial contributions may be directed to the Animal Rescue League of Iowa or the Greater Des Moines Botanical Garden in loving memory of Corliss.

Online condolences may be expressed at www.HamiltonsFuneralHome.com.


Published by the Des Moines Register on May 7, 2017.
To plant trees in memory, please visit the Sympathy Store.
MEMORIAL EVENTS
May
8
Visitation
9:00a.m.
Hamilton's Funeral Home
121 NW 60th Avenue, Des Moines, IA
May
8
Funeral service
10:00a.m.
Hamilton's Funeral Home
121 NW 60th Avenue, Des Moines, IA
May
8
Burial
Highland Memory Gardens Cemetery.
IA
Funeral services provided by:
Hamilton's Funeral Home
MAKE A DONATION
MEMORIES & CONDOLENCES
Sponsored by Hamilton's Funeral Home.
5 Entries
I did not have the pleasure to know Mr. Gilchrist in his lifetime, but read his obituary in the news, and it really moved me. He was a great example of the hard-working Americans who are too often mocked because we choose to live with compassion (for both humans and other species), and by the true meaning of the Golden Rule, and choose our leaders with those same qualities. I understand what it means to have to reach a little into the future when granting your loved one "permission" to pass, I had to tell my own mother something I thought was not true, but turned out to be on its way, so she would stop clinging on to her suffering. My condolences to the family, friends, and community that will greatly miss Mr. Gilchrist.
Kelly R.
May 17, 2017
It hasn't happened yet, but I am still waiting. Glad you will now rest in peace thinking it was already happening...!
B Gordon
Barbara Gordon
May 9, 2017
RIP brother. Hopefully your wish will be granted soon.
B Frick
May 9, 2017
God bless the family, may your father, grandfather rest now, and however, you put it he's at peace now
silver jackson
May 9, 2017
I have taken the liberty of adding his obit to my blog, http://ninalentinislifewithoutend.blogspot.com/, where he is among good company. My SIL in Des Moines sent me the obit. Condolences to all.
Nina
May 8, 2017
Showing 1 - 5 of 5 results