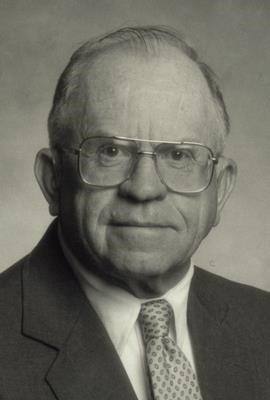 Donald Wayne Appell passed away early Wednesday morning, October 12 at Scottish Rite Park. Funeral services will be held Tuesday, October 18 at 10:00 am at Iles Westover Funeral Chapel. Visitation will begin at 9:00 am prior to the service. Burial will be at Glendale Cemetery.

Don was born July 10, 1924, in Des Moines, Iowa, the son of Otto and Martha (Johnson) Appell, both of whom emigrated from Sweden. He was the seventh of eight children. He graduated from East High School and was a proud alumna of Iowa State. He joined the Air Force after high school and served in the Asiatic Pacific Theater during World War II as a Remote Control Turret Repairman. He was a founding partner of Peterson and Appell Structural Engineers and later worked as deputy building code inspector of Iowa.

Don was the structural engineer for many major buildings in Des Moines and around the country, including Veterans Auditorium, additions to East High School, scoreboard structures in the original Dodger and St. Louis baseball stadiums, and the building in which he lived - Scottish Rites. He was a sad witness to the demise of one of his structures, the YMCA, in 2015.

Those are the facts. Here is what mattered:

He was beloved by all children and dogs in equal measure…adored by his 2 wives, his children and grandchildren, brothers and sisters, nephews and nieces and family near and far. He embraced all of his children as if they were his own. He loved his family, bourbon highballs, the Cubs, golf, Louis Armstrong, and pitch in that order. He managed to reach adulthood with a flush of innocence intact, a limitless and fascinating curiosity, a huge and irrepressible sense of fun and silliness, and a kindness of spirit rarely seen. He also walked through some of the hard years of life no longer being able to hear, and the world suffered his loss with him. Nevertheless, he kept his remarkable intelligence until the end and claimed to all that would listen that he could still use a slide rule.

We will miss him because of his goodness, his unmeasured generosity, his loyalty, and his amazing capacity for forgiveness. It is hard to imagine living in a world without him.

Don is survived by his daughter Jill Joseph, son Donald Todd Appell, grandson Owen Miller, youngest sister Catherine Gustafson, and a multitude of nephews, nieces, friends, and those not lucky enough to have known him. He was preceded in death by his first wife Shirley Olson, second wife Jadie Wilmoth, son John Joseph, grandson Preston Miller, his parents, and 6 brothers and sisters. The loss of his son and grandson nearly silenced him.

We believe that Don died knowing that the Cubs had bested the Giants in the top of the 9th inning on October 11th.

In lieu of flowers, memorials may be made to the Juvenile Diabetes Research Foundation. His first wife Shirley and son John were both denied a future because of this disease. Online condolences may be left at www.IlesCares.com.

The passage of time has in no way dimmed my recollection of how nice your Dad (and Mom) were to me and all the rest of your friends back in our high school years. I enjoyed and was at the same time saddened to read this beautiful tribute to him and his life so well lived.
Alan Koufer
October 16, 2016
Showing 1 - 3 of 3 results