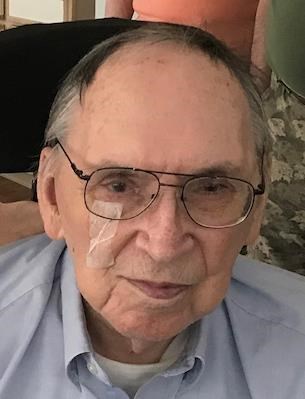 Gene was born on July 18, 1924 in Des Moines, Iowa, to Harold Earl and Josephine Mary (Cook) Potter. He was raised by his loving mother and grandmother, Jane Cook. After attending East High School, he enlisted on April 28, 1943 and served in the Army during World War II at the Battle of the Bulge. Upon discharge from the Army, Gene received the European African Middle Eastern Theater Ribbon with 1 Silver Battle Star which indicates he that he received the award a total of 6 times.

Returning to Des Moines, he worked at KRNT-TV (now KCCI) as a photographer. Gene met Gertraud "Trudy" Elenore Lentwojt on August 1970 in a photography class he taught at Fine Arts Camp, Graceland College. They were married about a month later on September 25, 1970 in Des Moines. The couple lived in West Des Moines and attended the Community of Christ Central Congregation in Des Moines where Gene served as a priesthood member and sang in the choir. He loved to learn about and play with cutting edge technology using it in creative ways, especially combining photography with computer software.

Gene's ashes will be interred in a private, graveside service at Resthaven Cemetery in West Des Moines. A Celebration of Life will be held later this summer at the Community of Christ, Central Congregation in Des Moines.

Gene is survived by his wife, Trudy, and first cousins Marilyn Allen, Donna Pratt, John Williams, Jane Williams, Twila Rider and Linda Barentine. He is remembered for his joyful spirit and his love of Jesus.

Published by the Des Moines Register from May 10 to May 16, 2021.
To plant trees in memory, please visit the Sympathy Store.
MEMORIAL EVENTS
To offer your sympathy during this difficult time, you can now have memorial trees planted in a National Forest in memory of your loved one.
Funeral services provided by:
McLarens Resthaven Chapel & Mortuary
MAKE A DONATION
MEMORIES & CONDOLENCES
Sponsored by McLarens Resthaven Chapel & Mortuary.
0 Entries
Be the first to post a memory or condolences.