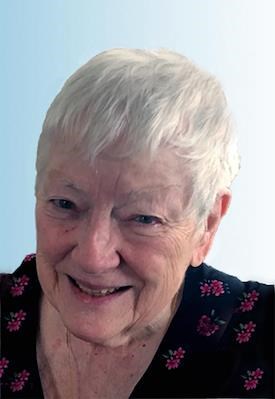 Born in McCook, NE, to Otto R. Nothnagel and Kathryn Lindsyz she grew up in Lincoln and attended the University of Nebraska. She and her beloved husband, Donald D. Benson of Lincoln, who preceded her in death in 2011 , were married for 59 years. Stranded in Reno, NV by a snow blockage of the Donner Pass while they were on their way to San Francisco for Don to meet a Navy ship to serve in the Korean conflict, they married. They lived in Hays, Kansas, and Columbia, Missouri, for short periods of time, moving to Des Moines in 1958 when Don landed a job with the Des Moines Register and Tribune.

Jackie was active with her kids, she set the pace water skiing and bike riding. Trailer camping to various lowa parks with weekends boating and camping at lake Rathbun being her favorite.

Jackie worked in various fields over the years including Real Estate, Banking, lnsurance for Blue Cross and finally child care. She was an avid bowler participating in up to 3 weekly leagues at one time and competed in several lowa State tournaments.

Her true calling was playing Bridge, she could never refuse an offer to play which resulted in her achieving Life Bridge Master status. She supported Don with his work at the Register as the Wagon master on multiple early RAGBRAI adventures as well as manned the Register's booth at the annual Sports and Vacation Show and lowa State Fair. She traveled internationally dozens of times on biking vacations and cruise ship excursions, including seeing China and Antarctica. Holland was one of her favorite places.

Online condolences are welcome at www.IlesCares.com.

To plant trees in memory, please visit our Sympathy Store.
Published by the Des Moines Register from Feb. 10 to Feb. 14, 2021.
MEMORIAL EVENTS
No memorial events are currently scheduled.
To offer your sympathy during this difficult time, you can now have memorial trees planted in a National Forest in memory of your loved one.
Funeral services provided by:
Iles Funeral Home - Westover Chapel
MAKE A DONATION
MEMORIES & CONDOLENCES
Sponsored by Iles Funeral Home - Westover Chapel.
2 Entries
Sorry for your loss. We knew Don and Jacque through the Za-Ga-Zig shrine as well as both Don and Guy were tux members. Our thoughts are with all of you during this time of difficulty.
Guy and Carleen Freeman
Friend
February 20, 2021
Sorry to hear of Jackie's passing. I remember her and Don as active members of Covenant Christian Church. Our prayers to the family. Peace.
Drue and Don Cavanaugh
Acquaintance
February 14, 2021
Showing 1 - 2 of 2 results