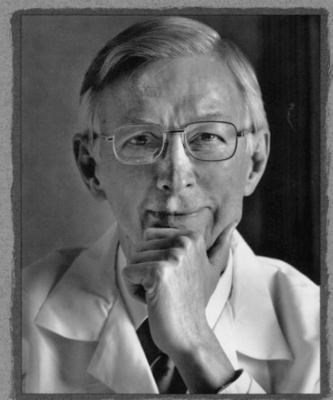 James A. Clifton, III, M.D., a distinguished academic physician whose leadership and mentoring skill helped guide the University of Iowa Roy A. and Lucille J. Carver College of Medicine and the field of medicine for more than four decades, died August 22, 2014. He was 90.

Born in Fayetteville, North Carolina, Jim was the only child of Flora McNair and James Albert Clifton Jr. His father was an internal revenue agent whose work required many family moves, and Jim finished high school in Nashville, Tennessee. His family's relationship with Thomas Frist, Sr., M.D., their family physician and Nashville neighbor, sparked his interest in medicine, the only career he ever considered, and in the University of Iowa where Dr. Frist had trained.

Jim attended college and medical school at Vanderbilt University, graduating from the Vanderbilt School of Medicine in 1947. He was appointed an intern at the University of Iowa College of Medicine where he chose internal medicine as his specialty. He was impressed by the friendliness of Iowans, noting that colleagues were quick to learn his first name. It was a friendly colleague who introduced him to Katherine Rathe of Waverly, Iowa, and they married in 1949. After his residency, Jim completed stints back at Vanderbilt for more gastroenterology training and at the Boston University School of Medicine where he was mentored by Franz Ingelfinger, M.D.

The Cliftons returned to Iowa in 1953 with Dr. Clifton's appointment to the internal medicine department of the College of Medicine. In 1955, mentor and department chair William Bean, M.D. named him founding chief of the fledgling gastroenterology division. Over the fifteen years that followed, his talent for management brought him increasing responsibility in the Department of Internal Medicine and he served as its ninth chair from 1970 to 1977. After stepping down, he began planning a new center for digestive diseases and became its medical director in 1985. He retired in 1991, but returned that same year to serve for two years as interim dean of the College of Medicine at the request of University of Iowa President Hunter Rawlings. He retired again in 1993, an Emeritus Professor.

Dr. Clifton's strategic vision and analytic ability were evident throughout his work. The gastroenterology division he headed was widely known and had the early distinction of winning more research grant dollars from the National Institute of Health than any other such division in the country. With his colleague and research mentor Harold Schedl, M.D., he defined and published important work on new aspects of intestinal absorption. Among these were groundbreaking studies on celiac disease and one which revolutionized the treatment of cholera. He reorganized the internal medicine department into seven divisions, laying the foundation for the current department. He guided the construction of new endoscopic and ambulatory care facilities and inpatient units in the Digestive Disease Center between 1985 and 1990. As interim dean, he led the work to develop a new medical school curriculum, overhaul the faculty practice plan and introduce new information technology.

National and international medical and scientific organizations also recognized Dr. Clifton's leadership. At the National Institute of Health, he chaired the Gastroenterology and Nutrition Research Training Committee and represented gastroenterology on the National Advisory Council of the National Arthritis, Metabolism and Digestive Disease Institute. He was president of the American Gastroenterological Association and the American College of Physicians. In the latter role, he received the Alfred Stengel Award for meritorious service after he guided a sweeping reorganization of the College. At the American Board of Internal Medicine, he was a member of the Board of Governors for eleven years, chairing both the parent board of governors and the gastroenterology subspecialty board. His was the first Iowa College of Medicine faculty member elected to the Institute of Medicine of the National Academy of Sciences. He was a member of the Ludwig Institute of Cancer Research Scientific Committee, an international not-for-profit research organization.

Dr. Clifton was an articulate and diplomatic man with a well-honed sense of humor. He felt his greatest gift was that he liked people, and said his family had been the biggest influence on his life. His parents encouraged him to work hard and get a good education. His wife's parents demonstrated the importance of political involvement, charitable giving and education. His wife, Kathy, held the family together while he worked, he said, and she was the guide who kept him straight.

Retirement gave Dr. Clifton the opportunity to travel and enjoy life in Iowa City with his family. He was active in the First Presbyterian Church and the Noon Rotary Club. He and Kathy relocated in 2011 to the Oaknoll Retirement Residence, where he died peacefully at home.

He is survived by his wife, Kathy, of 65 years; two daughters, Katie Deaderick (Skip) of Fort McMurray, Alberta, Canada and Carrie Adam (Miller) of Colorado Springs, Colorado; four grandchildren: Nicole Deaderick of Santa Fe, New Mexico, Jessica Schumacher (Carl) of Marshalltown, Iowa, and Paige and Quinn Adam of Colorado Springs, Colorado; and several cousins in Virginia. One daughter, Susan, and his parents preceded him in death.

Memorial services will be held at 2:00 pm on Saturday, September 20, 2014 at First Presbyterian Church, 2701 Rochester Avenue in Iowa City. Visitation will be Friday, September 19, 2014 at Lensing Funeral Home, 605 Kirkwood Avenue in Iowa City from 4:00pm to 7:00pm. In lieu of flowers, contributions may be made to the Susan M. Clifton Medical Scholarship Fund or the Museum of Art Building Fund at the University of Iowa Foundation, PO Box 4550, Iowa City, IA 52244 or at www.uifoundation.org.

Online condolences may be left for the family at www.lensingfuneral.com


Published by the Des Moines Register on Aug. 28, 2014.
To plant trees in memory, please visit the Sympathy Store.
MEMORIAL EVENTS
To offer your sympathy during this difficult time, you can now have memorial trees planted in a National Forest in memory of your loved one.
Funeral services provided by:
Lensing Funeral & Cremation Service - Iowa City
MAKE A DONATION
MEMORIES & CONDOLENCES
0 Entries
Be the first to post a memory or condolences.