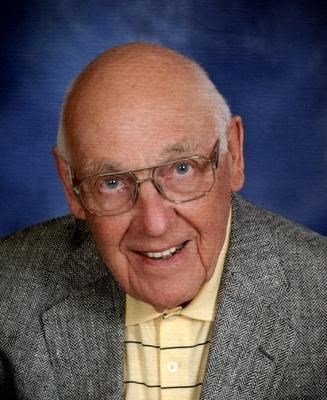 John F. Kleinschmidt, 88, of Ames, died Friday, January 2, 2015 at Kavanagh House in Des Moines, after battling cancer. A Mass of Christian Burial will be celebrated at 10:30 a.m., Friday, January 16, at St. Cecilia Catholic Church in Ames. Cremation will follow the Mass and burial will be at a later date.

John lived a full life hallmarked by hard work, faith, family, friends, love of country, and the importance of community service. John worked for J.C. Penney Co. for nearly 40 years, retiring in 1986 as Manager of the Ames, IA, J.C. Penney store. He was active in the parishes of every community into which the family moved. John and Doris faithfully cared for their son Jim for 22 years after he was seriously injured in an accident in 1985. John found his connections with friends and relatives important and regularly met with various groups to socialize and enjoy spirited discussions. John was proud of his country, his service to it in the Army Air Corps, and was deeply thankful to those who sacrificed so much to defend our freedoms. John was devoted to numerous formal organizations: Rotary International, United Way, Chamber of Commerce, Junior Achievement, and Knights of Columbus. He also helped people learning conversational English, and built countless woodworking projects for St. Cecilia Parish and School. John enjoyed life-long learning and cultural opportunities at I.S.U. and was a Cyclone sports enthusiast, especially football, men's basketball and women's volleyball. He was an avid golfer and enjoyed gardening, writing, and reading. John thought of himself as "just an ordinary guy," but he was extraordinary in his ability to do what needed to be done. He was also known for his methodical planning, practicality, humor and courage in the face of daunting challenges.

He was preceded in death by his wife, Doris; parents, John and Frances; and brothers, Msgr. Anthony and Walter.

Adams Funeral Home in Ames is assisting the family with arrangements. Condolences and photos may be shared and designated memorials viewed at www.adamssoderstrum.com

Published by the Des Moines Register on Jan. 8, 2015.
To plant trees in memory, please visit the Sympathy Store.
MEMORIAL EVENTS
To offer your sympathy during this difficult time, you can now have memorial trees planted in a National Forest in memory of your loved one.
Funeral services provided by:
Adams Funeral Home & Cremation Service - Ames
MAKE A DONATION
MEMORIES & CONDOLENCES
1 Entry
John was one of the most special people
in Ames and in so many ways--an incredible man and citizen. I am blessed to have known him.
Betty Baudler Horras
January 16, 2015
Showing 1 - 1 of 1 results