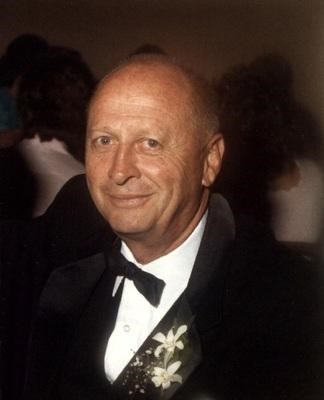 Coach Johnny Orr, 86, of Iowa, passed away December 31, 2013 at Iowa Methodist Medical Center in Des Moines. A private family service will be held at a later date.

Johnny Orr was born June 10, 1927 to Albert Lee and Anna (Lukach) Orr in Yale, Kansas. Johnny attended the University of Illinois prior to enlisting in the United States Navy. He later earned a Bachelor of Arts from Beloit College in Beloit, Wisconsin. He and Romala "Romie" Lee Robinson were married June 18, 1949.

Simply stated, Johnny had an illustrious career coaching basketball and was proud to serve as President of the N.A.B.C. Above all this, he will be remembered by his family as a devoted husband and caregiver. He loved the annual family golf outings and enjoyed beyond measure watching his grandchildren's athletic events.

He was predeceased by his parents and his daughter, Robin Ann Orr.

In lieu of flowers, a memorial fund has been established to be distributed to Johnny's favorite charities. Send gifts to First National Bank, 405 5th Street, Ames, Iowa 50010. Condolences and photos may be shared at www.adamssoderstrum.com

Published by the Des Moines Register on Jan. 3, 2014.
To plant trees in memory, please visit the Sympathy Store.
MEMORIAL EVENTS
To offer your sympathy during this difficult time, you can now have memorial trees planted in a National Forest in memory of your loved one.
Funeral services provided by:
Adams Funeral Home & Cremation Service - Ames
MAKE A DONATION
MEMORIES & CONDOLENCES
48 Entries
Valenda Newell
November 11, 2016
Thank you for sharing a part of your life with us.

Thank you for your service to this nation.
Harry Simpson
December 30, 2014
you are opening your hand and satisfying the desire of every living thing...pslm.145:16...sincere sympathy
January 29, 2014
Dear Romie,

I was so sorry to hear about Johnny. He was a wonderful role model for me, and had a positive influence on my career and life. It was a good time in Dubuque.

Sincerely,
Tom and Michele Johnson
Fair Oaks, CA
January 23, 2014
As a student at ISU from '82-86, I had the privilege of seeing firsthand the positive impact he had. I appreciate how hard he worked to leave the basketball program and the university in better shape than it had been when he arrived. He always had class and my respect.
Dwaine Brown
January 6, 2014
hey coach thanks for the memories, a true character and a nice man. hope the putts are falling! mike hall, jean and the St Andrews crew.
January 6, 2014
God bless you, Johnny. We loved you.
Bill & Jeanne Tiedeman
January 5, 2014
We will miss Johnny Orr. He was a great (people person) and one of the greatest story tellers of all times. Bill and Colette Colburn
Bill Colburn
January 5, 2014
I was out of country when I recieved the news of the loss your family suffered.....My most memorable round of golf was with Johnny along with my college friends who watch and cheered on the Cyclones in the late 80's...my wife bid on a cancer benifit round with Johnny.....best surprise she has ever given me....I share with all of my children what it was like during that time in Cyclone Basketball history...it was awesome! I have enjoyed watching video and reading the memories of a great man!
Thomas Miller
January 4, 2014
My family and I have wonderful memories with you at Good Shepard! Of course Mom and Dad attended many basketball games as loyal followers at Michigan. Now Dad is with your husband and father, still cheering him on! Our family's thoughts and prayers are with you.
The Steinaway Family
Karen Steinaway-Bowen
January 4, 2014
So sorry for Your loss a life is very precious to God.
January 4, 2014
I would never forget those days in the late 40's at Beloit,the Sigma Chi Fraternity, and fun times. Also, the visit with Johnny and Romie and some weekend golf in Dubuque,Iowa. Great guy, great couple.
Dick Hallman
January 3, 2014
It's probably difficult for outsiders to understand the heartache we Cyclone fans feel over the loss of our beloved Coach. It's impossible to explain to them what it was like to be in Hilton Coliseum for Johnny's fist-pumping entrance - or after a big win when he would look at the crowd and raise a fist in celebration. I would run to the car after games just so I could listen to Johnny and Pete on the radio. Good or bad, Coach called it as it was - praising good play but never sugarcoating a bad loss. And we loved him for it. Johnny was larger than life, but always had time to talk to a fan. I had the privilege of visiting with him briefly after his retirement, and my autographed copy of "Here's Johnny" is one of my prized possessions.

I know that the loss I feel is nothing compared to what you, his family members, are going through. Thank you so much for sharing your husband, father, and grandfather with us all these years. I hope that the outpouring of love from Johnny's friends, colleagues, players, and fans brings you some measure of comfort. My thoughts and prayers are with all of you.
Meg Barker
January 3, 2014
Our daughter was Captain of the Pom squad Johhny's last year at I.S.U. He was so good to the squad and so protective of them. He was a Great Man.
Larry Slaughter
January 3, 2014
May the love of friends and family carry you through your grief.
January 3, 2014
Thank you Johnny, 2Timothy 4:7-I have fought the good fight, I have finished the race, I have kept the faith….God is saying: Matthew 25:21-“Well done, good and faithful servant! RIP Johnny, and may God surround your entire family during this time with his Love & Strength.
January 3, 2014
Thanks for the memories COACH!!!
I treasure my autographed Johnny Orr book.Sincere condolences to the family.
Doug Drake
January 3, 2014
My thoughts and prayers are with the Orr family. RIP
Donna Hampton
January 3, 2014
My father bought four season tickets to ISU men's basketball when Johnny was hired to coach ISU. We still have those four seats today and cherish every memory of those great years with Johnny as our coach. Whether entering Hilton, speaking at the summer banquets, or conversing after the games with Pete Taylor and Eric Heft, Johnny always left us smiling. His favorite expressions and memorable games will live with us forever just like the Hilton Magic that he created. Thank you Johnny!
Gary and Vicki Owens
January 2, 2014
Romie, Jennifer, Leslie and Becky my thoughts and prayers are with you and John. John's life is so full of accomplishments. I will remember him for his humanity. I can not begin to describe the impact Johnny had on so many charitable activities. He enhanced the lives of so many children and adults through his many efforts. He will be missed but we all have had the honor to be in the company of a special humanitarian.
Mike Reilly
Michael Reilly
January 2, 2014
Johnny the greatest!!!!!!!!!!!!!!

Wayne Orr Family,Taylorville, Illinois
January 2, 2014
My condolence to the family. Job 33:25 gives us hope of things to come. My prayers are with you during this time.
Venice Johnson-Hunter
January 2, 2014
A true gentleman and great coach has left us. Johnny was a credit to the game and coached so many of the greats of the game. Michigan and Iowa State are much the better having this legend coach their fine programs. Now Johnny is coaching again for a greater team now. May our dear loving Savior comfort and bless his family during this sad time. Rest in Peace coach and thank you for your career, you are a credit to the game.
Victor Checketts
January 2, 2014
My deepest sympathy may God words bring you comfort during this time.He will actually swallow up death forever, and certainly wipe the tears from all faces
Is. 25:8
January 1, 2014
We loved you! We have many memories of you and Romie. Continue to coach the Cyclones from Heaven with Pete calling the game.

With My Deepest Sympathy,
January 1, 2014
I forgot to sign my name to my post..Paul Wixom,Rockford,Il posted 1/1/14
Paul Wixom
January 1, 2014
COACH ORR WAS MY COACH AND TEACHER AT MILTON UNION HIGH SCHOOL IN WIS.HE WAS MY INSPIRATION TO BECOME A TEACHER.I LATTER WORKED WITH DOLPH STANLY AT AUBURN HIGH IN ROCKFORD IL AND HAD MANY TALKS ABOUT WHAT A GOOD PERSON JOH WAS.I WILL SAY A PRAYER FOR JOHN.I REMEMBER HIS NASH RAMBLER!
January 1, 2014
May your hearts soon be filled with wonderful memories of joyful times together as you celebrate a life well lived.
DStallings
January 1, 2014
Loosing someone is never easy to deal with. You have my sincere condolences during this difficult time.
Yolanda Cole
December 31, 2013
I would like to extend my sorrow to the family and friends. I hope you all find courage from acts24:15. One day you and your love ones will unite again.
l harris
December 31, 2013
Condolences to the family and friends during this difficult time. Mat you have comfort and peace. Philip 4:7
Deborah
December 31, 2013
Please accept my condolences for your loss. John 5:28
December 31, 2013
May the Great God of Comfort be with the Orr family during this difficult time. (2Corintians 1:3,4)
Christina
December 31, 2013
condolences-rip
joaquim-rodrigues-redeemer barbosa
December 31, 2013
With heavy hearts and with our deepest sympathy, the Carter family is thinking of you during your time of sorrow. As you hold closely the cherished memories that you shared with Johnny, may God comfort you and grant you inner peace while you "await the hour in which all those in the memorial tomb will hear Jesus' voice and come out." Today, we are remembering Johnny Orr, one of the greatest, and offering our depth-less gratitude for his love for the game and his wholesouled commitment to the young men he coached.
Butch
December 31, 2013
My sympathy goes out to the family during your time of grief. Treasure the special times spent with Johnny as you draw strength from the love of family and friends. Also, may God's loving-kindness comfort you and help you through this difficult time. Psalms 119:50,76
G. Alexander
December 31, 2013
To the family
My deep condolences.
Soon God promises to bring an complete end to death and pain.
December 31, 2013
I am very sorry for loss. During this time turning to God and his word the Bible can be a great source of comfort. Act 24:15 shows that your love one has the hope to love again. I offer my condolences during this sad time.
India
December 31, 2013
Romie & Girls--I so fondly remember your days in Ann Arbor when you were at Scarlett and John was a Wolverine. He generously provided guidance to me when we were searching for a basketball coach at Huron High School. The basketball (and golf) world lost a giant and you lost a great husband and father. May he rest in peace.
"Nord" (John) Nordlinger
December 31, 2013
Johnny Orr was ALWAYS a class act---RIP
December 31, 2013
A true professional who will be missed by all.
Mike Fufla
December 31, 2013
To the family I want to extend my prayers and thoughts to you for your loss. I hope you know there are so many behind you at this time not only because Johnny was a legend with Iowa State, but because he was a good person with a good heart.
Katie Ford
December 31, 2013
My sincere condolence for the loss of Johnny, your dear loved one. I grew up watching his team Michigan play Indiana the team I liked, but I loved his way of coaching. May your fond thoughts of him bring back good memories. Peace and love to your family and friends, and to the spirit that you all show. (John) (JAH)
B Lucas
December 31, 2013
I am sorry for the loss of such an extraordinary person. He was a living legend and will be greatly missed.
T T
December 31, 2013
Showing 1 - 48 of 48 results