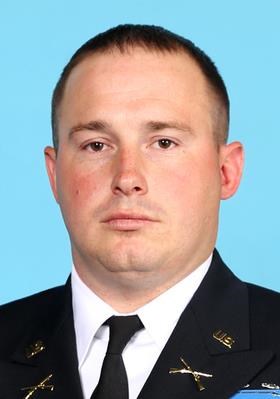 Scott was born October 8, 1984 in Oceanside, CA to Don and Raini Baraibar. He wrestled during high school in Storm Lake, and a time after graduation joined the military. On November 19, 2009 he commissioned as a US Army Infantry Officer. Scott served in the 1-168 Infantry Battalion as an Infantry Platoon Leader, a Mortar Platoon Leader, a Liaison Officer, and a Plans Officer. His military education included, Infantry Basic Officer Leader Course, Infantry Mortar Leader Course, Pathfinder Course and Maneuver Captain's Career Course. He served overseas in Afghanistan in 2010-11 where he was awarded a Bronze Star and a Combat Infantrymen Badge. Scott returned to Afghanistan as a private contractor, and continued his service commitment in the National Guard. In 2014 Scott was brought on active duty for the Iowa National Guard as a Plans Officer in preparation for a large joint training exercise. He had continued to serve in this role and was recently selected to take command of Alpha Company 1-168 IN.

Scott was dedicated to his work but in his free time enjoyed hunting, fishing, boating and movies. He was working with his father-in-law to learn the art of farming. Scott was always willing to lend a helping hand to anyone.

He will be greatly missed by his wife, Jamie; his parents, Don (Tracy) Baraibar; his sister, Angie (Dusty) Sanders; his in-laws, Gary (Krista) Harpenau and Joni (Josh) Breuer; his grandparents, Jacquelyn Baraibar and Harry Cook; nieces and nephews, Sunshine, Dylan, Quinten, Emily and Olivia; many aunts and uncles, cousins and other loving family members; and his military brothers and sisters who affectionately referred to him as Boo Boo. Scott was preceded in death by his mother, Raini Baraibar and grandparents, Antonia Baraibar and Fadra Cook.

Memorial contributions may be directed to the family for distribution to various charities in Scott's honor. Condolences may be expressed online at www.HamiltonsFuneralHome.com.


Published by the Des Moines Register from Mar. 4 to Mar. 6, 2016.
To plant trees in memory, please visit the Sympathy Store.
MEMORIAL EVENTS
Mar
6
Visitation
6:00p.m. - 7:30p.m.
Hamilton's Funeral Home
3601 Westown Parkway, West Des Moines, IA
Mar
6
Vigil
7:30p.m.
Hamilton's Funeral Home
3601 Westown Parkway, West Des Moines, IA
Mar
7
Burial
11:00a.m.
Iowa Veterans Cemetery
Adel, IA
Funeral services provided by:
Hamilton's Funeral Home
MAKE A DONATION
MEMORIES & CONDOLENCES
Sponsored by Hamilton's Funeral Home.
3 Entries
Scott will be remembered as someone who was quick to smile and was always there to lend a helping hand when it was needed. I send my condolences to the family he spoke so often of during our time together in Afghanistan. His passing comes as a tremendous shock to us all.
Josh Augustine
March 8, 2016
R.I.P. 1st LT Malcolm Baraibar, it was great honor to know You, and work together in FTX -TY 2015 in Wyoming.
1st LT Getoar Rexhepi
March 4, 2016
A brave Army Soldier who served courageously for our freedom. Keeping your family in our thoughts and prayers. Blue Star Mothers of America - Houston Texas Chapter
Beth Durham-Gillett
March 4, 2016
Showing 1 - 3 of 3 results