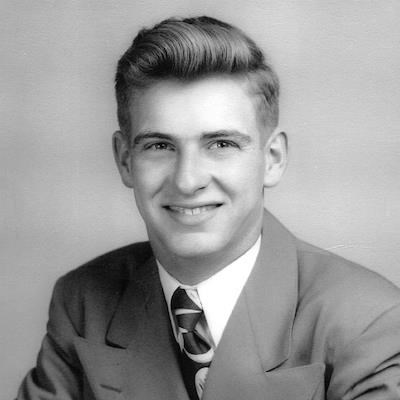 Ray was in the Air Force during the Korean War from 1951-1955. When he returned from the Air Force, he worked for Employers Mutual Casualty (EMC). He was the first insurance auditor hired by EMC after EMC decided to use their own employees as insurance auditors rather than independent auditors. Ray was transferred to the Milwaukee Branch Office in 1957. In 1964, he was promoted to field supervisor. Ray was a former President and co-founder of the Insurance Auditors Club. Ray was also President of the Wisconsin 1752 Club. He was the Professional Insurance Agents' Company Person of the Year in 1995. He worked for EMC for 40 years.

Ray was a very accomplished golfer. He learned the game of golf as a caddy at the Wakonda Country Club in Des Moines. Ray was the number two honor caddy. He was the caddy for several scratch golfers including Louise Suggs, a co-founder of the LPGA. While in high school, he played in the Iowa High School State Championship. Ray was a seven handicap and won the Milwaukee County Public Links Tournament at Whitnall Park. Ray was proud of his 71 score in a match medal tournament held there. He had 13 eagles and one hole-in-one, the first made at that hole.

Ray was married to Theda L. Russell (Miller) who he met in high school. Theda passed away July 17, 2010. Theda was Ray's pride and joy. She brought many people to our Lord Jesus including Ray and their son.

Visitation will be held at LAYTON AVENUE BABPIST CHURCH, 9900 West Layton Avenue on Monday, June 14, 2021, 3-5PM. Funeral Service at 5PM. Burial will be private at Good Hope Cemetery. In lieu of flowers, contributions may be made to Layton Avenue Baptist Church or to Evans Scholars Foundation, 2501 Patriot Boulevard, Glenview, IL 60026-8022.

To plant trees in memory, please visit our Sympathy Store.
Published by the Des Moines Register from Jun. 8 to Jun. 9, 2021.
MEMORIAL EVENTS
Jun
14
Visitation
3:00p.m. - 5:00p.m.
LAYTON AVENUE BABPIST CHURCH
9900 West Layton Avenue
Jun
14
Funeral service
5:00p.m.
LAYTON AVENUE BABPIST CHURCH
9900 West Layton Avenue
Funeral services provided by:
Krause Funeral Home & Cremation Services, Inc.
MEMORIES & CONDOLENCES
Sponsored by Krause Funeral Home & Cremation Services, Inc..
2 Entries
So sad that you left us too soon Uncle Ray. I will sure miss your phone chats and stories from the past. Rest easy and know someday your loved ones left behind will reunite with you and past family members. Being saved and having a relationship with God gives us that assurance we will reunite with our loved ones and family again. Thank you Jesus for your sacrifice on the cross so that all of our sins are forgiven. That will be a great event indeed. Prayers to Robin and Carrie Sue. May God give you peace and healing through this difficult time. Love you all and see you again someday Uncle Ray!
Robert Russell II
Family
June 9, 2021
Our Heartfelt Sympathies to all of Ray's Family & Friends. His loss is felt by many. He will truly be remembered for being such a good kind caring man & a faith filled man too. He was an Insurance friend of our dad, Tom Mattson & even after dad passed away, stayed in touch with our mom until her passing & then continued with such with us adult "kids." We always looked forward to his yearly Xmas card greetings. We are Honored to have known Ray. May your memories bring you much comfort & joy during your times of grief. God has Welcomed Ray Home. Rest in Peace Ray... Rest in Peace... Peace be with you All, Mel Mattson ~ Cudahy, WI Dave Mattson & Family ~ West Allis, WI Peggy Mattson Windsor & Family ~ Clearwater, FL
The Mattson & Windsor Family
Friend
June 9, 2021