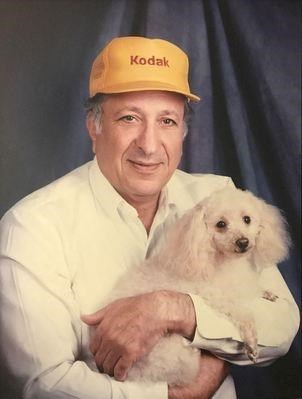 Richard "Dick" Ameen, 84, passed away at his Nevada, Iowa home on May 9, 2017. Richard was born on April 14, 1933 in Monmouth, Illinois, the youngest son of Najeby Ameen (Bakkar) and William Albert Ameen who immigrated from Lebanon to America in the early 1920s.

Richard's tenacious energy led him to work long hours to provide for his family and his soft heart led him to provide for animals in need. His dogs were a major part of his life, especially his poodles Chloe, Pixie, and Lexie. Richard's love of math fed his passion for playing duplicate bridge; he was a masterpoint bridge player, playing in bridge tournaments in many Midwestern states. He loved to teach others about computer programming, how to play pool and billiards, and how to get a good deal when buying and trading cars. Richard enjoyed spending time with his lifelong friends, Syd Ross and John Romine as they played bridge, attended sporting events and took part in many college and class reunions. His passion for quality was reflected in his work, how he treated friends, family, employees, and in the way he carefully maintained his cars and homes.

Richard graduated from Monmouth High School in Illinois where he and his best friend Syd Ross were known as great baseball players. Richard worked summers detasseling corn fields to pay for college. He received a BA in math from Monmouth College in 1954. A classroom in new Center for Science and Business at Monmouth College is named in honor of him and his parents. Following graduation from Monmouth College, he taught math for a short time. Richard then moved his family to southern California and worked as a computer programmer for TRW, a space program agency, that was a pioneer in spacecraft manufacturing. While working at TRW, Richard also took graduate business courses.

The family moved to Nevada, Iowa where he held supervisory positions for 15 years at the Iowa Dept. of Transportation; his work was vital to the development of the Iowa online driver license issuance program. He served for over five years as a manager of data processing at the Iowa Dept. of Education in Des Moines, Iowa. After retirement, he spent several years as a contracted program consultant.

Family reunions with his brothers and sister in Monmouth, Illinois were renowned for their openness to friends and family, bringing everyone together to cook and share Lebanese food and offer a good time for all.

Memorial donations may be made in Richard's name to Ankeny Vet Clinic, 301 NW 18th street to assist animals in need of vet services. (Ankenyveterinaryclinic.com)

Online condolences may be left at www.rasmussonfh.com

Published by the Des Moines Register on Jun. 4, 2017.
To plant trees in memory, please visit the Sympathy Store.
MEMORIAL EVENTS
To offer your sympathy during this difficult time, you can now have memorial trees planted in a National Forest in memory of your loved one.
MAKE A DONATION
MEMORIES & CONDOLENCES
Sponsored by the Des Moines Register.
0 Entries
Be the first to post a memory or condolences.