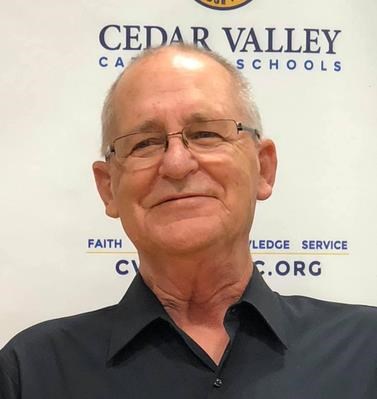 Johnston - Rick Hendryx, 75, passed away peacefully at the Mercy Hospice house on Sunday, March 22, 2020 following a battle with cancer.

Rick was born June 18, 1944 in Cedar Rapids, Iowa and grew up there. He attended Regis High School where he was a standout athlete in Football and Baseball. He went on to play football at the University of Iowa and obtained his degree in teaching. Upon graduation, he married Lynn Hendyx (Burkhart) and they settled in the Cedar Rapids area where he taught History and coached a wide variety of sports at his alma mater.

In 1974, his family moved to Waterloo when he took the head football coach job at Waterloo Columbus. He continued to teach and took on Athletic Director responsibilities there. During his 16 years at Columbus, his teams won two 3A state championships, made the playoffs in multiple seasons and together with his coaching staff and players, built a winning tradition that he was very proud of.

He was inducted into the Iowa High School Football Coach's Hall of Fame and recently into Columbus' Athletic Hall of Fame. He made lifelong friendships at Columbus and cherished the camaraderie and relationships with those with whom he worked.

After the passing of his wife Lynn, he remarried Charlene Hendryx (Smith) and together they moved to Des Moines where he taught History and coached football briefly at Lincoln High school until his retirement. His passion for football extended past his playing and coaching days, through his love for the Hawkeyes and Green Bay Packers. He was a lifelong fisherman, he loved to garden, play bridge, gamble and spend time with his family & friends.

He will be missed by the staff at Prairie Meadows, as well as his Bridge House family - where his sharp wit kept everyone entertained… some more than others! We want to especially thank his bridge family for their support of him by bringing him weekly meals to take home, offering words of encouragement, waking him up if he happened to doze off in the middle of a game, but more importantly, by giving him a place that he admitted has kept him going in the last five years and was the highlight of his week. We are forever grateful to you.

He is survived by his best friend and companion, his dog Charlie, with his family coming in a very close second. Dad, Gramps, Coach Dick …oh how we will miss you. Life with you was never dull, you were truly one of a kind, and our life was certainly more fun with you in it. The stories we will share with one another about your humor and antics through the years will keep us laughing forever. Thank you for being YOU.

A celebration of life will be held later this year. Memorial contributions may be designated for the Animal Rescue League of Des Moines. Online condolences may be expressed at www.HamiltonsFuneralHome.com.

To plant trees in memory, please visit our Sympathy Store.
Published by the Des Moines Register from Mar. 24 to Mar. 29, 2020.
MEMORIAL EVENTS
No memorial events are currently scheduled.
To offer your sympathy during this difficult time, you can now have memorial trees planted in a National Forest in memory of your loved one.
Funeral services provided by:
Hamilton's Funeral Home
MAKE A DONATION
MEMORIES & CONDOLENCES
Sponsored by Hamilton's Funeral Home.
7 Entries
I'm going to miss you so much. I loved the way we fought with each other. I'm glad I made you laugh and smile during your visits to the casino. Fly high my beautiful friend. I love you. Love Cynthia, dealer at Prairie Meadows♡♡♡
Cynthia Kelly
Friend
March 29, 2020
I knew Rick from bridge and always enjoyed challenging him. We enjoyed our shared bond of loving our Hawkeye football. He was fun and funny even as his suffered through the pain of cancer. He will be missed!
Kristin Welter
March 28, 2020
My condolences to Rick's family. I only knew Rick at the bridge table but I looked forward to moving to his table because he always had something positive and humorous to say.
Dean Ulrichson
Dean Ulrichson
March 27, 2020
Coach, u were the perfect Yen to Coach Schartner's Yang and so many of us enjoyed and learned from the fantastic educational experience the two of you created for us. Thank you for the time you took to teach, coach and care for us all in the amazing way you did it. RIP Coach!!!!
Danielle Bagbey
Student
March 26, 2020
Rick struggled to get to each bridge table but no-one minded waiting for him. He was so grateful for any meal we brought. All of us in the bridge world will miss his quick humor and verbal wit.
Joann McDonald
March 26, 2020
Our sympathy to Rick's family. We will miss him as we met weekly for lunch or dinner at his favorite place to play. We had great fun with him over the years at Lincoln HS. He and Char were close neighbors and frequently dropped in for coffee Rest in Peace friend no more pain LVU Gary and Sue
Gabel
Friend
March 25, 2020
Our sympathy to Annie, Bart and their families. We had many good times with your Dad and Mom during their years in Waterloo. He was a great coach, and a good friend. Larry and Gigi Kayser
Larry,Gigi Kayser
March 25, 2020
Showing 1 - 7 of 7 results