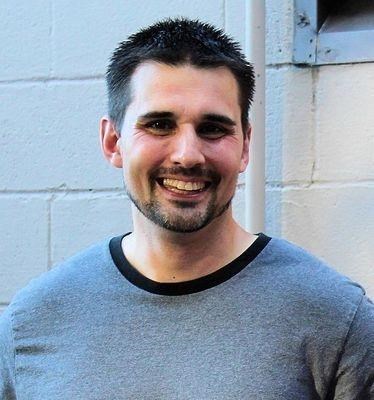 Richard Joseph Miles was born on March, 23, 1974 in Forest City, IA. He went on to attend Theodore Roosevelt High School in Des Moines and attended Drake University before entering military service in 2002. After his service with the Army, Richard attended Iowa State University, studying physics and astronomy.

Richard Miles was a warm, positive and service oriented person. He always sought to help others even if that help meant putting himself in harm's way. Richard was a long time member of the science presentation team at the Science Center of Iowa where he shared his deep interest in science, especially astronomy, with thousands of visitors. He was joyful when he could share his love of science with young people.

Richard answered the call to serve his country in the Army after the 9-11 attacks. He served proudly and with distinction for four years earning the Army Commendation Medal for Leadership and Duty During Combat Operations, the Army Commendation Medal for Leadership at Fort Riley, the U.S. Army Good Conduct Medal for service from 2002 - 2005, and the Combat Action Badge from Operation Iraqi Freedom 2.

Richard's passion and universe was all about his children, Emmalynn and Zain. He will be remembered by his friends, family, co-workers, and all who he touched as a passionate educator, friend, son, brother and above all, an amazing father. He will be fiercely missed by all who had the privilege of knowing him.

Friends and family are invited to join in a celebration of Richard's life Sunday, March 1st, from 5:00 - 7:00 at the Science Center of Iowa.

Contributions to support the continuation of Richard's work in astronomy education can be made to the Science Center of Iowa (sciowa.org).


Published by the Des Moines Register from Feb. 27 to Mar. 1, 2015.
To plant trees in memory, please visit the Sympathy Store.
MEMORIAL EVENTS
To offer your sympathy during this difficult time, you can now have memorial trees planted in a National Forest in memory of your loved one.
MAKE A DONATION
MEMORIES & CONDOLENCES
16 Entries
You have my deepest condolences on your immeasurable loss. My thoughts and prayers are with you during this difficult time. There is little that I can say or do to ease your pain and suffering. May knowing that you are in the thoughts and prayers of many, bring a measure of comfort. Life is so short and those we love are gone from our lives too quickly. God's promise to empty the grave in the near future is found at Hosea 13:14. May the God of loyal love comfort you during your time of sorrow.
gloria
March 3, 2015
I was so deeply saddened to learn of Rick's passing. He was so bright, warm, fun-loving, intelligent, conscientious, and caring and loving. My condolences to Rick's family and friends at this time of sorrow. May the good memories help you through your grief.
C P
March 1, 2015
I was shocked to hear of Richard's passing, but was inspired tonight by the hundreds gathered in his honor at the Science Center of Iowa. Clearly his passion for his vocation shined through and inspired many others, that his light no longer shines at SCI saddens me. I pray that the light of those he inspired will be kindled and burn brightly enough to fill the void left by his departure. Rest in peace Richard.
Trevor & Jennifer Riedemann
March 1, 2015
You made life brighter. Your notable warmth, kindness, lessons and many gifts will be greatly missed. Prayers of comfort, guidance and peace for all. Our family will always miss you.
February 28, 2015
I only know Richard through a mutual friend. However, this much I know. The Knowledge, Leadership and Confidence that he instilled in many others will last in the hearts of all he touched...FOREVER.
Ray David
February 28, 2015
RIP Richard. We had fun times at the SCI. Keep Looking Up!
Burton Lodwick
February 28, 2015
My family is very proud of Richard for his service to our country. He will be missed but not forgotten. God bless Richard and his family.
Keith Acheson, and family
February 28, 2015
Sgt Miles was an amazing soldier. It was an honor serving as one of his Platoon Sergeants for Operation Iraqi Freedom. I wish I would have stayed strong and stayed in touch with all my men from the Renegades. Miles, I am being strong now. Strong for you and Moose. I miss you both and love you like brothers. I have started a group for the Renegades. A group that we can all stay in touch and help one another. I ask that you and Moose watch over us and protect us from above. One day, we will see you both again, until then, keep the Bradleys maintain. To the family, if you need anything or just to talk about Miles, the Renegades are here. My cell is 316-650-9951 and I am working on finding all the Renegades. In closing, Miles and Moose, I salute you both. Renegade 7 out.
Dean Rhein
February 28, 2015
May those who knew and loved you be comforted at this time.
Debb Mozga
February 28, 2015
I am lighting this candle for an amazing young man Richard Miles. His service to the military is to be commended. Also, his love of science was passed on to so many people throughout his life if only he knew how much his work meant to so many.
Beverly Hummel
February 28, 2015
I only knew you for a short time but your passing saddens me. You were a soft spoken, kind, caring, sweet man who touched many lives. Your selfless service will not be forgotten. RIP
February 27, 2015
My thoughts are with your family. Richard was an amazing asset to the Science Center. My son was instantly drawn to him. He loved my sons passion for all things space. My son attended 3 sessions of space camp just to learn more from Richard. May he finally find peace.
abbey
February 27, 2015
To Richard's family you should be extremely proud of his service to our country. I am honored to have served as his Platoon Sergeant at Fort Riley. He was a super Soldier and his memory will live on in everyone who was lucky enough to have known him.
MSG Doug Cantrell
February 27, 2015
I would like to light a candle for Richard who was a wonderful young man. He was taken entirely too early in life.
February 27, 2015
I am deeply saddened by Richard's passing. He was very young when he became a volunteer at the
Science Center and a very bright young man also so helpful. My deepest sympathy to his family and all those who have worked with him at the Science Center. Beverly Hummel, former Volunteer Coordinator at the Science Center
Beverly Hummel
February 27, 2015
You will always be in my heart. You were an amazing young man. Will always love you Rickie Jo! Uncle Tom
Tom Miles
February 27, 2015
Showing 1 - 16 of 16 results