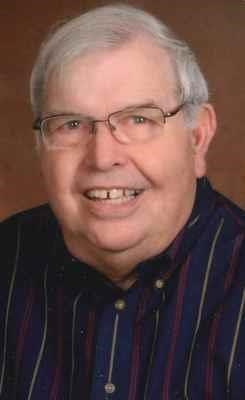 Memorial mass for Robert "Bob" Lutz, 76, of Jefferson will be 10:30 am Wednesday, April 6, 2016 at St. Joseph Catholic Church in Jefferson. Burial will be in St. Joseph's Cemetery, Jefferson, IA. Visitation will be Tuesday, April 5, 2016, with family present from 5:00 pm to 7:00 pm at Slininger-Schroeder Funeral Home in Jefferson.

Bob was born January 22, 1940 in Keokuk, Iowa, raised in Donnellson, the oldest son of Norma and Earl Lutz. He attended from Donnellson Community School and graduated in 1958. He attended Iowa State Teachers College, now UNI, and played in the marching band. After graduation he taught for two years in Walker, Iowa before teaching 8th grade literature in Jefferson for 35 years, retiring in 2000.

Bob spent many hours playing bridge and long ago achieved the Master status. He was a fan of the St. Louis Cardinals and Iowa Hawkeyes and followed the Hawks to several bowl games.

Bob is survived by his sister Mary Jo Dickinson of Minnetonka, MN and his brother Richard Lutz of Champaign, IL. He is also survived by his nieces Julie Colby of Danville, Illinois, Catherine Zois of Oakwood, OH and Catherine Dickinson of Telluride, CO and his nephew John Dickinson of Telluride, CO. His many friends will miss his sharp wit, lively conversations and Christmas letters. Mr. Lutz will also be remembered by hundreds of former students for his compassion for all students and the love of reading he passed on to them. Memorials are suggested to the Jefferson Public Library and may be left at Slininger-Schroeder Funeral Home. Online condolences may be left at www.schroederfuneral.com.