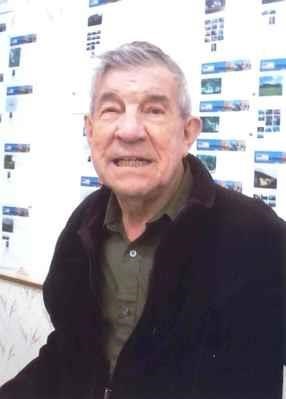 Bob was born on September 25, 1927 in Des Moines, Iowa, the son of Henry and Blanche (Luckett) Rosencrants.

After graduating from Moravia High School, Bob joined the United States Navy on May 7, 1946. From Pearl Harbor to China, Bob enjoyed the opportunity to see the world while serving his country faithfully.

Following his discharge from the Navy in 1948, Bob found work on the railroad as a fireman. A hot and tedious job that led to a life-long appreciation for steam engines and rail roads.

Bob's first business was a radiator repair shop on 7th Street in Centerville in the early 1950s. In the mid 1950s Bob created a scrap metal business on Elm Street which he sold in the early 1970s. Self financed and built from the bottom up, Bob created a thriving scrap business, working seven days a week, 16 hours a day.

An entrepreneur at heart, Bob spent much of his adult life putting deals together. In the late 1960's Bob went into the used automobile business, eventually adding mobile homes and recreational vehicles.

Work was Bob's life. He had a passion for making deals. He believed in overcoming adversity through perseverance. He never wanted to retire.

Bob was active in many groups throughout his lifetime, including the American Legion, the VFW-Post # 526, the Masons, and the Centerville Chamber of Commerce.

Bob was preceded in death by his parents; and a sister, Rose Stayton.


To plant trees in memory, please visit our Sympathy Store.
Published by the Des Moines Register on Mar. 29, 2016.
MEMORIAL EVENTS
Mar
29
Visitation
6:00p.m. - 8:00p.m.
Lange Funeral Home
1900 S. 18th St., Centerville, IA
Mar
30
Funeral service
10:00a.m.
Lange Funeral Home
1900 S. 18th St., Centerville, IA
Mar
30
Burial
Oakland Cemetery
, Centerville, IA
Funeral services provided by:
Lange Funeral Home & Crematory LLC
MAKE A DONATION
MEMORIES & CONDOLENCES
Sponsored by Lange Funeral Home & Crematory LLC.
9 Entries
I was Bobs friend and caregiver. I took care of him a couple times after he came out of the hospital. He always made me laugh...God Bless you Bob...
Sally Houser
Friend
April 1, 2016
It was so unusual to go home to Centerville and talk to someone that new my dad. My dad Doyle Curtis died 55 years ago, but Bob remembered him and would talk to me about him. He made my day.

We are sorry for your loss. He was a hard worker and Centerville should be proud to have had him there for all of those years.
Gary and Cheryl (Curtis) Burrows
Friend
March 31, 2016
You are in our thoughts and prayers. He was a great man who will be greatly missed.
The Ewings- Margery, Marilyn, Matthew, Becky and Sarah, Tony and Kelly
Friend
March 27, 2016
Only knew Bob in passing but always enjoyed talking to him. May he rest in peace. David Oden
David Oden
Friend
March 27, 2016
Bob was a humble man who always had a smile and "hello" for you. We have so enjoyed getting to know him these last few years. He was an awesome businessman who always had time for others. Prayers to Robert and the family and Bob's close friends and colleagues. May God comfort you all! Vaness Oden and Steve Widmar
Vaness Oden
Friend
March 26, 2016
Hauled a lot cattle for Bob. Moved he and his Dad from the Lake front into town. Had a lot of good conversations over the years. He was a good friend. He will be missed. Kendell Oden
Kendell Oden
Friend
March 26, 2016
Bob was a one of a kind guy, always smiling and joking. Will miss this friend. Please accept our sincere sympathy and prayers, and may your loving memories give you peace.
Dennis & Beverly Sisul Laurson
March 26, 2016
What a great friend Bob was, having worked with him for many many years. He always had a friendly HI for you. Will be missed.
Janet Demry
Friend
March 25, 2016
R.I.P. Dear friend, I can't think of life without you here. You have taught me allot. God Bless you on your new adventure.
Barbara Melvin
Coworker
March 25, 2016
Showing 1 - 9 of 9 results