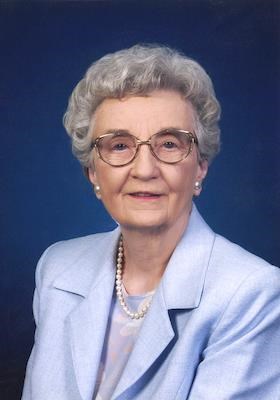 Judge Klotz was born on November 10, 1922, to Inez Morgan Babcock and Lloyd Babcock in Mason City. She grew up in the home of her Morgan grandparents in Iowa Falls, where she graduated from high school in 1940 and from Ellsworth Junior College in 1942. She then moved to Des Moines, where she did secretarial work at the Iowa Department of Employment Security. She married Earl Fritz in 1950, and earned her BS from Drake in 1954 and her JD from Drake Law in 1955. Earl died in 1954, and Ruth married Richard Klotz in 1956.

As a woman attorney and judge, she was an inspiration and mentor to two generations of women in the law in Iowa. Professionally, she had a solo practice in Hampton, then joined the Dickinson firm in Des Moines, followed by several years with Bankers Trust. She was appointed to the bench as Probate Referee for the 5th Iowa Circuit in 1978, and retired as an Associate Judge in 2013 at the age of 90. She was recognized for her service by the Iowa Organization of Women Attorneys' Arabella Mansfield Award, the Polk County Bar Association's Lifetime of Service Award, and by being named the Drake Law School's 1999 Alumna of the Year, among other honors. In 2019, she was inducted into the Iowa Women's Hall of Fame.

She joined Plymouth Church in 1959. She served for many years as treasurer of the church and the Plymouth Foundation. She also served on the Calvin Community board.

She is survived by her daughter Holly Klotz (David Simpson) of Des Moines, and her grandchildren Jane Simpson of Des Moines and Andrew Simpson of Justice IL. She was preceded in death by her husband Richard Klotz, and her cousins, Jack Larsen of Knoxville, TN, and Nadine Sorenson of Los Altos, CA.

There will be a private burial service, followed by a public memorial service at a later date. In lieu of flowers, the family suggests donations to Plymouth Church Foundation, 4126 Ingersoll Ave, Des Moines, IA 50312, or Soroptimist International of Des Moines, 2208 SW 35th St, Ankeny IA 50023.

The family thanks the staff of Home Instead, A-Plus Services/Sutton Senior Home, and Care Initiatives Hospice for the care that Ruth received since 2018.

Published by the Des Moines Register from Nov. 15 to Nov. 22, 2020.
To plant trees in memory, please visit the Sympathy Store.
MEMORIAL EVENTS
To offer your sympathy during this difficult time, you can now have memorial trees planted in a National Forest in memory of your loved one.
Funeral services provided by:
Iles Funeral Homes - Dunn's Chapel - Des Moines
MAKE A DONATION
MEMORIES & CONDOLENCES
Sponsored by Iles Funeral Homes - Dunn's Chapel - Des Moines.
7 Entries
Thanks, all, for your condolences. Friends and family may be interested in this video from the 2019 Iowa Women's Hall of Fame induction.
https://youtu.be/x32kK1lrtQ8

Also, Iowa Bar Association posted a small portion of a 72 minute oral history video recorded in 2010: https://youtu.be/RjGbZBY6Gxo
Holly Klotz
Daughter
November 20, 2020
I had her as my probate judge for my Dad and she was really good you will be missed by many RIP Judge Klotz
Earlyne Wilson-Ruiz
Acquaintance
November 18, 2020
I had the pleasure on working on the bench with Judge Klotz for over twenty years. She was a well regarded expert on probate and treated all trust funds as if they were her own, safeguarding the assets of those she was protecting. Judge Klotz was a mentor for the women judges who followed. In addition Judge Klotz gave many hours to service at Plymouth Church. Well done, good and faithful servant.
Donna Paulsen
Coworker
November 17, 2020
She was the most powerful, yet the most helpful and kind, district judge I ever had the pleasure of working with and I have missed her since she retired.

She lived a full life and was an inspiration to many of us
Joseph W. Fernandez
Student
November 16, 2020
A beautiful heart, wonderful woman, and brilliant legal mind.
Nancy Hays
Acquaintance
November 16, 2020
Oh Ruth what a women you were. It was a pleasure to know you for as long as I did. Dont have lots of memories but the ones I do have of you you were a woman of grace love and a hard worker who loved what she did
I was so lucky to be there for your last days on this Earth we would say the pray The Our Father and she wouldn't miss a word She would tell me I See the Light and I would tell her its Jesus telling you to come home and be with me but she said I will in my own time I still need to touch the hearts of people down here. She touched mine. Rest In Peace Judge the house won't be the same with out you. Love to You Judge Klots and to Holly and and the grand children Karrie at the S House RIP BEAUTYFUL LADY
Karrie Thomas
Friend
November 16, 2020
Ruth Klotz was a wonderful person, I was honored to have known her.
Theresa Garrison
Friend
November 16, 2020
Showing 1 - 7 of 7 results