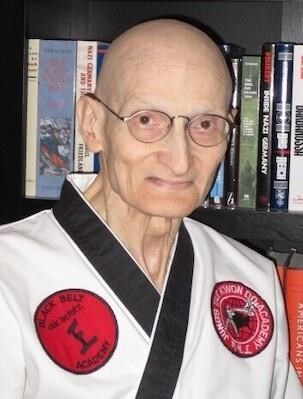 He was born in Waterloo, IA, on July 13, 1945, but grew up in Burlington, IA. He graduated from Notre Dame (Burlington) High School in 1963 before marrying classmate Sharon Eastin; they were married for seven years and had a son, Eric. Tetsugen attended the University of Iowa and graduated from U of I Law School in 1971, after which he began a private practice in Iowa City with Sharon Mellon; they were married for five years and had a son, Will. In 1978 he moved to Des Moines to become an assistant attorney general under Iowa A.G. Tom Miller, before being named general counsel to the Iowa Department of Transportation. In 1984, after years of training in martial arts, he left law practice and opened the Eric Heintz Black Belt Academy, which he owned and operated until his retirement for health reasons in 1995, training thousands of students over that time. His black belts continue to teach in schools and clubs in the greater Des Moines area. He was an avid endurance athlete and regularly raised money for Amanda the Panda Center for Grieving Children by breaking thousands of boards over the course of a single day. In addition to his 6th-degree black belt rank in Tae Kwon Do, he also attained a 3rd-degree black belt in the Korean sword art of Kum Do. He was a dedicated practitioner and student of Zen Buddhism, and was ordained as a Zen priest in 1999. Students and family appreciated his wit, intelligence, and dedication to work. He had a rare ability to work with students of all ages, sizes, abilities, and cultural backgrounds. It was very important to him that everyone who entered his school felt welcome and had an opportunity to train. His favorite activities included collecting books, scholarly studies in the areas of history and Buddhism, bird watching, listening to music, and spending time with family and cats.

Tetsugen is survived by his wife of over forty years, Kaye Bair, also of Burnsville; his children, Eric Heintz (Gina Mastroluca) of Portland, ME, Christine Searson (Michael), of Apple Valley, MN, and Brent Bair (Kristi), of Prior Lake, MN; his five grandchildren, Connor and Kayla Bair, Cody and Cieran Searson, and Sophia Heintz Mastroluca; a sister, Kristin Davis of Prairie du Chien, WI, and brother, Kurt Heintz, of Seattle, WA.

He was preceded in death by his son, William Mellon Heintz, of Portland, OR; his parents, James and Helen Heintz, of Palatine, IL; and a sister, Joan Eck, of Virginia Beach, VA.

Cremation will take place at Crescent Tide Cremation Services in St. Paul on Nov 16th at 2 pm. A small family gathering is tentatively planned for next summer. Donations can be made to C&W Rustic Hollow Cat Shelter in Nashua, IA, and the Animal Rescue League.


Published by the Des Moines Register from Nov. 12 to Nov. 15, 2020.
To plant trees in memory, please visit the Sympathy Store.
MEMORIAL EVENTS
Nov
16
Service
2:00p.m.
St. Paul
IA
MAKE A DONATION
MEMORIES & CONDOLENCES
Sponsored by the Des Moines Register.
6 Entries
Kaye~our thoughts are with you and your family. You had many years with Eric. Cherish your memories.
Dick & Sue Rasmussen
Dick Rasmussen
Coworker
November 19, 2020
I remember my first lesson in the dark dining room off the lobby of the YWCA in Des Moines. Mr. Heintz (I don't remember knowing him as Master Heintz and I mean no offense by addressing him as Mr. Heintz herein) taught us to chumbi and horse stance and how to properly form a fist and I was smitten. But more importantly, as we went on I learned that Tae Kwon Do wasn't about learning to fight, but about the Tenents of Tae Kwon Do: courtesy, integrity, perseverance, self-control, and indomitable spirit. Even today, 40 years later those remain firmly rooted in my brain. They were placed there by Mr. Heintz and Ms. Bair and their patient instruction.

Back then we were a farm team of Jung's Tae Kwon Do and my first DoBok still has their logo on the back. We even had to travel to Cedar Rapids to test for Black belt. I remember how very excited we were to become the Eric Heintz Black Academy and to eventually move in next to Dahl's with a carpeted floor and a changing room right there! We worked together to care for it: washing the mirrors, vacuuming the floor, cleaning the bathrooms, etc. I remember the group runs outside in our bare feet in the winter snow and the demonstrations in the blazing parking lot during the summer. But most of all I remember Friday Night Black Belt Class and years of patient instruction, practice, friendships, and togetherness.

It was a heady thing for a young boy of 11 to earn a black belt and take up instructing students two to five times his age, but Mr. Heintz was always there encouraging and mentoring and placing responsibility upon my young shoulders. And when I messed up or fell short or slacked off - he was there with firmness and patient persistence. At the risk of sounding cheesy, he was a real-life Mr. Miyagi in my young life.

Mr. Heintz fell ill and came back and I only vaguely understood why, but then other sports and activities caught my teenage attention and I stopped going to class. I saw him very few times after that. Once? Maybe twice. It feels wholly insufficient, ungrateful, and even shameful given the magnitude of the gift he gave me over those years. Mr. Heintz was a wonderful man and a wonderful teacher. He and his school will always have a deep place in my heart. I remember him with great fondness. I cannot thank him enough, and pray God's mercy and comfort be with Ms. Bair and the family and friends he leaves behind.
Andrew Nordine
Student
November 16, 2020
Master Bair, it is with a saddened heart to hear of Master Heintz's passing. Master Heintz was truly an amazing man and I am happy and proud to say that I was and am part of his legacy!! Blessings to you and the rest of the family!!
Gary R Westemeyer
Student
November 15, 2020
Kaye, I am so sorry to hear of Eric's death. I didn't know him very well, but I know the man you would love is a good man. I will keep you and your family close to my heart during this difficult time.
Marilyn Sand
Friend
November 15, 2020
Grief can be so hard, but our special memories help us cope. Remembering you and your loved one today and always. My family and I will always remember him and all he taught us through taekwondo! We are all black belts thanks to him! He will really be missed. Hugs and prayers
Karol Hammer
Student
November 14, 2020
It was a privilege to know Master Eric Heintz. His selflessness with his time. When I think of respect I think of Master Heintz. I can say with all honesty that I would not be the man I am today with out him.
Bob Sledge
Student
November 13, 2020
Showing 1 - 6 of 6 results