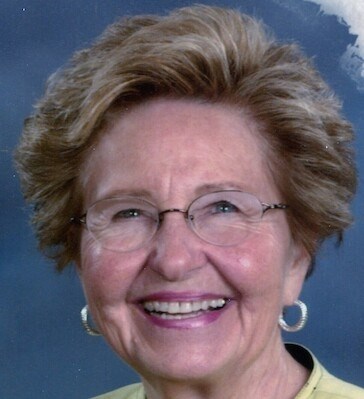 Mt Clemens - Age 86, of Mt Clemens, MI died peacefully in her sleep on July 29, 2021. Survivors include children Steven Waters (Jadine Moy) of San Ramon,CA, Michael Waters of Mt Clemens, Patrick Waters of Chicago, IL, Anne Baty (Donald) of Grosse Pointe Park, Julie Waters of Lawrence, KS, and Jean Taylor (Tim) of Livonia. Also survived by her grandchildren David and Elana Baty, William and Christian Waters, Emma Lumpe and Mia Waters, and Kevin and Shannon Taylor. Preceded in death by her husband of 64 years, William (Bill) Waters, and her brother Francis Becker. She was born in Benton County, IA on September 25, 1934 to Frank and Marjorie Becker. She grew up on a farm outside of Norway, IA where she attended school through high school. She earned a B.S. in home economics from Iowa State and married Bill in 1956. She moved to Michigan and had six children in seven years. She was active in St Athanasius Church. She began working at St John Hospital Food Services in 1971, was promoted to Assistant Food Service Director in 1974, Director in 1975, and retired in 1996. Her overall mission was to improve the quality of hospital food. As an innovator who was able to see what was possible, she expanded and revitalized food services, hired chefs, and opened the café and bakery for retail sales. She set high standards and treated everyone with love and respect. She was the first woman to direct Food Services at St John and did so while raising six children during a time when careers for women with children were not supported. Recognizing the potential of other women, she strongly encouraged them to further their education. She insisted that education was never wasted. All six of her children earned college degrees. She earned an M.A. in Health Administration from Central Michigan University in 1983. Alice was a social person at her core. For several decades, she enjoyed attending University of Michigan football games. She enjoyed every opportunity to be with and share a meal with her children. For 22 years she and Bill spent winters in Gulf Shores, AL. She was a member of St Louis Parish for over 40 years and sang in the church choir both in Gulf Shores and at St Louis Parish. She loved annual family vacations to beautiful places and continued to travel extensively in retirement. She was eternally positive and optimistic and frequently told her family members how proud she was of them. Each new spouse, grandchild and friend was welcomed into the family. In the last two decades of her life she developed memory loss which became Alzheimer's. Through it all she maintained a pleasant demeanor and smiled often. She continued to enjoy social interactions and delighted in her dedicated caregivers, Nargis and Dessie. Even near the end of her life a well sung favorite song would be rewarded with eye contact and a smile. She was a research subject in an Alzheimer's research study and donated her brain for research. Services will be held at St. Louis Parish, 24415 Crocker Blvd., Clinton Twp, MI 48036 on Thursday, August 5, instate at 10:30AM with funeral mass at 11:00AM. Interment to follow at Resurrection Cemetery. See www.vickfuneralhome.com for memorial contributions and a full obituary.


Published by The Detroit News & Detroit Free Press from Aug. 2 to Aug. 3, 2021.
To plant trees in memory, please visit the Sympathy Store.
MEMORIAL EVENTS
Aug
5
Lying in State
10:30a.m. - 11:00a.m.
St. Louis Parish
24415 Crocker Blvd., Clinton Twp, MI
Aug
5
Funeral Mass
11:00a.m.
St. Louis Parish
24415 Crocker Blvd., Clinton Twp, MI
Funeral services provided by:
Harold W. Vick Funeral Home, Inc. - Mount Clemens
MAKE A DONATION
MEMORIES & CONDOLENCES
2 Entries
So sorry for your loss. May the God of all comfort and hope bring the family peace and love.
JG
August 28, 2021
Alice was my co-worker for 6 years in the 90s at St. John. She basically adopted me in our organization and mentored me, as well as becoming a true friend. She was absolutely ahead of her time as a working career woman and guided me well. Her door was always open. And she truly achieved her goals of changing the way hospital food was prepared and the quality of the meals served. We rarely left the St. John campus for lunch because the food was so good in the cafes. And the parties she and Bill threw were always wonderful, including the explorations of Bill´s wine cellar. Alice, you´ll always be part of my heart and my thoughts are with your family.
Ann Hekhuis
Work
August 3, 2021
Showing 1 - 2 of 2 results