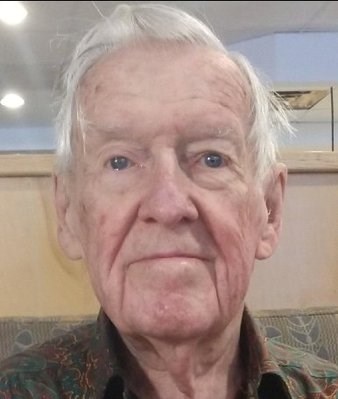 WORTHINGTON, JOHN Henry of Foxboro, formerly of Bloomfield Hills, MI passed away on October 16, 2019 at the age of 97. Beloved husband of the late Janet (Roberson) Worthington. Devoted father of Anne W. Colman and her husband Neal of Sharon, Sheryl R. Worthington of NC and Elizabeth W. Peters and her husband Daniel of MI. Cherished grandfather of Bridget Peters, Katherine Peters, Joshua Peters and his wife Alissa, Elise Colman, Benjamin Colman and Jessica Colman. Brother of Norton Worthington of Sarasota, FL and many late brothers and sisters. Son of the late Lester Peirce Worthington and Elizabeth Harper (Edwards) Worthington, of Woodbury, NJ. Jack was a navigator and proud veteran of WWII. He was a graduate of Temple University and earned his Master's degree from Medill School of Journalism at Northwestern University. He resided in Evanston, IL and worked for the Chicago Sun Times, eventually moving to Michigan, where he worked for The Detroit News for eight years and completed his career as Editor and Publisher of the D.A.C. News. After a year as a widower, Jack moved to Foxboro, MA where he took up golf, gardened, went on walks with his beloved pet, Diva, and enjoyed a leisurely retirement. At the request of the family burial will be private. In lieu of flowers, donations may be made in his name to: The American Legion Donation Processing PO Box 361626 Indianapolis, IN 46236-1626. 1-800-433-3318 or to World Wildlife Fund 1250 Twenty-Fourth Street, N.W. P.O. Box 97180 Washington, DC 20090-7180.


Published by Detroit Free Press & The Detroit News from Nov. 6 to Nov. 7, 2019.
To plant trees in memory, please visit our Sympathy Store.
MEMORIAL EVENTS
To offer your sympathy during this difficult time, you can now have memorial trees planted in a National Forest in memory of your loved one.
Funeral services provided by:
Kraw-Kornack Funeral Home
MAKE A DONATION
MEMORIES & CONDOLENCES
1 Entry
Just heard about Jack's passing, so sorry. I'll miss our discussions on world matters we had at the Horse and Carriage.
April 11, 2020
Showing 1 - 1 of 1 results