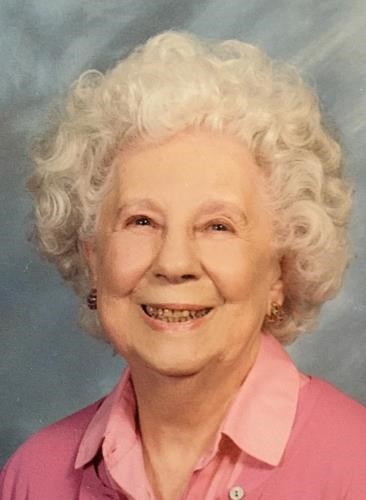 BORN
1921
DIED
2016
FUNERAL HOME
Foust & Son Funeral Home
523 S MAIN ST
Grapevine, TX
Adelaide "Lolly" Caneza Sprague died peacefully on Wednesday, April 20, 2016, at the age of 94 at her home in Grapevine. Service: Relatives and friends are invited to attend a Memorial Mass at 10 a.m. Friday, April 29, at St. Maria Goretti Catholic Church, 1200 S. Davis Drive, Arlington 76013. Memorials: In lieu of flowers, donations in memory of Adelaide "Lolly" may be made to Chi Chi's Rescue Ranch, Inc., 32245 Equestrian Trail, Sorrento, Fla., 32776 or to Dallas-Fort Worth Dachshund Rescue Foundation, P.O. Box 1892, Colleyville, Texas 76034. Lolly was born on Nov. 29, 1921, in New Orleans, La., to the late Elizabeth Bauer Caneza and Andrew P. Caneza Sr. For 37 years she was the wife of the late George L. Sprague and was preceded in death by her daughter, Ann E. Sprague, and her sister, Althea Caneza. She lived in New Orleans until relocating to Grapevine in 2003. She graduated from Ursuline Academy in New Orleans, received a bachelor of science degree from Ursuline-Brescia College in New Orleans and a master of science degree from Loyola University in New Orleans. Lolly and her husband were founding members of the former St. Frances Cabrini Church and Parish, which were devastated and displaced because of hurricane Katrina in New Orleans. At the time of her death, she was a member of St. Maria Goretti Catholic Church in Arlington. In addition she was a lifetime member of the Catholic Daughters of America (Court Mater Dei 868), the Mathematical Association of America, and the National Council of Teachers of Mathematics. She was a member of the Teachers' Retirement System of Louisiana and the Association of Women in Mathematics. After graduating from Ursuline-Brescia College, Lolly worked as a chemist at the Southern Cotton Oil Laboratory for several years. After receiving a phone call from a dear friend and favorite teacher, Sister Louise Aime, CSJ, principal of St. Rose of Lima School, who needed a certified teacher to add to her faculty, Adelaide began her teaching career. She taught in the Catholic and public schools in Orleans and Jefferson parishes for 29 years. She was a mathematics teacher at the Academy of the Sacred Heart, Mount Carmel Academy, St. Joseph Academy, East Jefferson High School and Bonnabel High School. With the help of Brother Neal Golden, SC, she introduced the Academic Games to teachers and students of the Jefferson Parish schools. As a member of Court Mater Dei, she served as a counselor for Junior Catholic Daughter troops in New Orleans and Metairie. She and her husband were active in Court Mater Dei activities for many years. After retiring, she enjoyed traveling; playing bridge; hiking; reading; playing the piano; genealogy; taking mathematics, physics and engineering courses on her laptop; and watching the EWTN Global Catholic Television Network. Most of all, she enjoyed spending time with her family. Survivors: Her brother, Andrew P. Caneza of Longwood, Fla.; her sons, Andrew R. Sprague (Mary) of Metairie, La., Donald Sprague (Cathy Denning) of Grapevine and Gerard Sprague (Melanie) of Knoxville, Tenn.; six grandchildren; five great-grandchildren; many nieces, nephews, cousins and friends, including her friend and caregiver, Gloria Rivas.
Published by Star-Telegram on Apr. 27, 2016.
To plant trees in memory, please visit the Sympathy Store.
MEMORIAL EVENTS
May
7
Visitation
12:00p.m. - 1:00p.m.
St. Catherine of Siena Church
105 Bonnabel Blvd, Metairie, LA
May
7
Funeral Mass
1:00p.m.
St. Catherine of Siena Church
105 Bonnabel Blvd, Metairie, LA
May
7
Interment
All Saints Mausoleum
LA
Funeral services provided by:
Foust & Son Funeral Home
MAKE A DONATION
MEMORIES & CONDOLENCES
Sponsored by the Star-Telegram.
7 Entries
Aunt Adelaide is smiling in all my memories of her. Such a sweet lady!
May 6, 2016
May your family find peace and comfort in knowing sickness, pain and death will one day be gone for this has been promised.
May 4, 2016
Lolly was the most amazing woman I have ever met. She truly inspired me and loved to share all of her knowledge. She was so blessed to live such a long and fulfilled life. I will never forget her. I love you Lolly and you will be greatly missed.

May all of you find comfort in the blessings Lolly bestowed on everyone.

Love, Elaine Autin
May 2, 2016
Thinking of you Cathy and your family in this difficult time. It was obvious the passion and love you had for Lolly. I feel like I knew Lolly by the way you spoke of her.
Chris Charland
April 28, 2016
Prayers for peace in such a difficult time. The abundance of love and enjoyment was always apparent when Cathy spoke of Lolly.
Holly Burns
April 26, 2016
Lolly was a brilliant woman who was very caring and thoughtful. I remember her coming to my first son's baby shower and being so gracious- she and Cathy gave us a beautiful receiving blanket that I still have to this day. My thoughts are with the entire family, especially Donald and Cathy.
Jenifer Axline
April 26, 2016
What a wonderful woman. The Hilker's will always treasure the memories of the times we spent with Miss Lolly. Our thoughts and prayers are with the entire family. We will remember her always.
Hilker Family
April 25, 2016
Showing 1 - 7 of 7 results