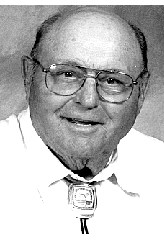 BORN
1920
DIED
2020
FUNERAL HOME
Sparkman/Hillcrest Funeral Home & Memorial Park
7405 West Northwest Highway
Dallas, TX
Albert "Big Al" Faxon Topham DALLAS--Albert "Big Al" Faxon Topham passed away Wednesday, May 13, 2020, at home at the age of 99. SERVICE: Pending due to Covid-19. MEMORIALS: Memorial gifts may be made to Bates College, Z Andrews Road, Lewiston, ME 04240 or Northridge Presbyterian Church, 6920 Bob O Link Drive, Dallas, TX 75214. Al was born Aug. 2, 1920, in Boston, Mass., the only child of Robert A. and Corinne Faxon Topham. He played hockey and football in high school at The Huntington School and then at Bates College where he was a football All-American in 1939 and 1940. After graduation in 1941, Al was drafted in the sixth round of the NFL draft by the Detroit Lions. In 1943, he married Jeanne Bancroft and was married for 56 years until her death in 2000. Al and Jeanne had daughter, Candy, and a son, Roy. Jeanne and Al loved watching Roy play football in high school for Woodrow Wilson and in college for TCU. He remained an avid sports fan and loved watching his granddaughter, Sarah, pitch - winning the state championship and pitching for the Arkansas Lady Razorbacks. They were proud of their daughter, Candy, who received numerous Teacher of the Year awards in Tucson, Ariz. In 1942, Al enlisted in the United States Marine Corps and served as a captain. He was a plank holder aboard the battleship USS New Jersey. In officer training school, he finished eighth out of a class of 240. He fought in the Pacific theater of World War II for almost four years. He remained very patriotic and was so proud of his granddaughter, Amy, a current career officer in the U.S. Navy. After the Marines, Al was the commercial lines manager for Travelers Insurance Company for over 40 years, retiring in 1984. He built the Dallas office from half a million to over $10 million in revenue. Al was a world-class quail hunter and skeet shooter and was inducted into the NSSA Hall of Fame in 2004. As a skeet shooting referee, Al was responsible for bringing complete fairness and objectivity to skeet shooting with professionally trained referees. He was the chief referee for the 1984 Los Angeles Olympics skeet shooting competition. Al was a member of the Dallas Gun Club, serving as president in 1981-82. Al was a master woodworker, creating beautiful furniture, pens and anything made from wood. He was an active member of the Northridge Presbyterian Church for over 65 years. Big Al was often described as a "character," a great friend, fierce competitor, skilled craftsman and wonderful family man. He was tough, loyal and highly ethical. He will be missed but not forgotten. Al was preceded in his death by his wife, Jeanne Bancroft Topham, and granddaughter, Leslie Jeanne Likes. SURVIVORS: He is survived by his son, Roy and wife, Laurie; daughter, Candy Likes and husband, Keith; grandchildren, Amy Topham and husband, Kirk Timmins, Sarah Topham and husband, Jeff Koons, Bradley Likes and wife, Erin; and four great-grandchildren. Special thanks to Patricia Barron, Randy Y'Barbo, and Brenda Smith for their care and friendship for Al for many years.

To plant trees in memory, please visit our Sympathy Store.
Published by Star-Telegram on May 17, 2020.
MEMORIAL EVENTS
No memorial events are currently scheduled.
To offer your sympathy during this difficult time, you can now have memorial trees planted in a National Forest in memory of your loved one.
Funeral services provided by:
Sparkman/Hillcrest Funeral Home & Memorial Park
MEMORIES & CONDOLENCES
Sponsored by the Star-Telegram.
8 Entries
In loving memory of a wonderful person. We will love you and miss you always.
Bobbi Johnson
Friend
May 13, 2021
Happy Birthday Al! I am sorry You did not celebrate your 100th Birthday with us like we all had wished for. God had plans for you to celebrate with Him in Heaven. We miss you and know you were loved by us. Enjoy your Margarita in Heaven Al and spread your love! ❤❤
Sylvia
Friend
August 2, 2020
Al was a great friend and mentor to all the Texas Referees. We called him "Coach"...and for good reason. He made us the best in the world, and we all loved him immensely. He was our hero.
Godspeed Coach. You will be greatly missed and always remembered!
Heath Fry
Friend
May 21, 2020
My condolence to the Topham family. Al was very proud of both Candy and Roy. He was fun to be around and made great pens. I will never forget the story of him calling in artillery on an island during WWII. He said that the first salvo missed the whole island. He always considered the safety of his men first. The Texas skeet referees are the most respected group in the nation due to his efforts.
J. Drake
Acquaintance
May 21, 2020
Al Topham was my friend and mentor in International Skeet. He was my sponsor at Dallas Gun club and close friend for 45 years. He will be very much missed. Godspeed, the Halls of Valhalla and Heaven are your home now.
bill marshall
Friend
May 17, 2020
Al was a great neighbor and friend. ... His presence and history within Lakewood will be missed. ... Condolences to the Topham family - and to the Lakewood community.
The Family
Neighbor
May 17, 2020
Al, I felt like I had known you for years. You were such a fun person to be around with - I looked forward to my Visits w/ you every week. Im going to miss your sweet smile and our good laughs. This is how I will always remember you. You will be truly missed my friend, Rest In Peace.
Sylvia
Friend
May 17, 2020
Skipper, WRT your life, thank you, sir. It was a privilege to know you. Bravo Zulu. Bravo Zulu. Bravo Zulu. Sincere sympathies to family and friends. Al was a treasure. I will miss him a lot. EOM.
Richard Parr
Acquaintance
May 17, 2020
Showing 1 - 8 of 8 results