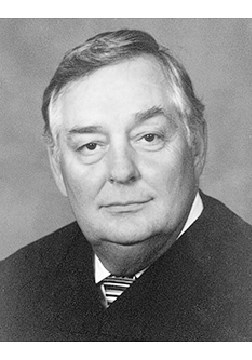 BORN
1937
DIED
2018
FUNERAL HOME
Clements-Wilcox Funeral Home
1805 Highway 281 North
Marble Falls, TX
Don Leonard KINGSLAND--The Honorable Judge Don Leonard, retired judge of the Texas State Criminal District Court Number Three of Tarrant County, passed away Tuesday, July 24, 2018. Don was born Dec. 7, 1937, to Albert and Jessie Leonard and was raised in Waco, Texas. He attended Tarleton College and went to the University of Texas in Austin where he received a degree in business sministration and a Doctor of Jurisprudence degree. After law school, he moved his family to Fort Worth to work as an assistant city attorney and then became a municipal court judge from 1963 to 1966, at the age of 25, considered to be the youngest judge at the time. He went on to form his private practice in civil, criminal and family law from 1966 to 1982. In 1982 he was elected to the bench of Criminal District Court Number Three, a post he held for five terms undefeated. Judge Leonard's community and civil activities have included former and current memberships in the Tarrant County Bar Association, the State Bar of Texas, the Western and Northern District Federal Bar Association, the Texas Trial Lawyers Association, the State College of the Judiciary, the Southside Optimist Club and St. Stephen Presbyterian Church. Don was a graduate of the National Judicial College, was appointed by the Honorable Gib Lewis to serve on a committee studying the role of the family in reducing recidivism, served on the Tarrant County Crime District Board of Directors and was a former chairman of the Board of Judges and the Juvenile Board. He was awarded the prestigious Silver Gavel Award for his outstanding judicial service by the Tarrant County Bar Association. Don was a proud Longhorn and loved football, along with golf, hunting, and fishing. Most of all, he enjoyed spending time with his family at home on the lake. He was also known for his fairness and sense of humor. Dad lived his life as a good, faithful, Christian man. May he rest in peace. Don was preceded in death by his parents, Albert and Jessie Leonard, and his son-n-law, Phillip Walker. SURVIVORS: He is survived by his loving wife, Judy, of 62 years; along with his daughters, Debra Walker, Cynthia Leonard; son-in-law, Henry Encina; grandchildren, Donald Leonard and wife, Nadejda, Megan Benavides and husband, Russell, Shelby Walker, Saralyn Walker, and Samuel Encina; great-grandchildren, Austin, Donny, Lillian, Aubrey, Carson, and London. FUNERAL: 11 a.m. Monday, July 30, at the Texas State Cemetery, 909 Navasota St., Austin, Texas. Our Lady of Guadalupe Parish, 1206 E. 9th St. has given permission to use their parking lot that opens up on Navasota. Rooms have been blocked at the Embassy Suites Town Lake, 300 S. Congress Ave., Austin, 512-469-9000, under "Leonard Memorial." MEMORIALS: In lieu of flowers, the family suggests donations be made to St. Jude Children's Research Hospital, or a favorite charity of your choice. CLEMENTS WILCOX FUNERAL HOME Marble Falls, 830-693-4373 View and sign guestbook at www.star-telegram.com/obituaries
Published by Star-Telegram on Jul. 28, 2018.
To plant trees in memory, please visit the Sympathy Store.
MEMORIAL EVENTS
Jul
30
Funeral service
11:00a.m.
Texas State Cemetery
909 Navasota Street, Austin, TX
Funeral services provided by:
Clements-Wilcox Funeral Home
MAKE A DONATION
Please consider a donation as requested by the family.
MEMORIES & CONDOLENCES
Sponsored by the Star-Telegram.
7 Entries
My one-yr old daughter and I happened on the beautiful grave this afternoon. Such a beautiful grave and resting place. God Bless -jts
July 30, 2018
charles thomas
July 29, 2018
Believe In The Centurion Head As Serene Silence Moves Over The Hills Everlasting Reign Finding Uniquely Created Kindnesses Embolded Reflection... as we follow the capital letters of the writers words and world...into tomorrow. .
Trey Lunch
July 29, 2018
Judge Leonard was as fine a judge as I have ever met. I learned so much from him early in my career. I am very fortunate to have known him. I will always remember him and what he did for me. My condolences to his family.
Glenn Lewis
July 28, 2018
Sorry for your loss. May the God who "binds up the brokenhearted" and "comforts all who mourn" strengthen your family during this difficult time (Isaiah 61:1,2)
July 28, 2018
I'm sorry for your loss. May the true God of comfort, comfort all those mourning and bind up the brokenhearted.
Isaiah 61:1,2
Cj
July 28, 2018
I am so sorry for the immeasurable loss of your loved one. May God strengthen and sustain you with 'everlasting comfort and good hope' and 'comfort your hearts' during this deeply sad and terribly difficult time. - 2 Thessalonians 2:16,17
July 28, 2018
Showing 1 - 7 of 7 results