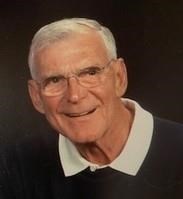 BORN
1933
DIED
2020
FUNERAL HOME
Lucas Funeral Home - Hurst
1321 Precinct Line Road
Hurst, TX
Edwin Bruce Ebert
August 9, 1933 - August 3, 2020
Euless, Texas - Service: September 12, 2020 at 11:00 am, St. Vincent's Cathedral, 1300 Forrest Ridge Blvd, Bedford, TX. In lieu of flowers, donations may be made to the Celiac Disease Foundation (celiac.org) and Meals on Wheels of Tarrant County (5740 Airport Fwy, Haltom City, TX 76117).
Bruce was born in Springfield, Missouri on August 9, 1933. The only child of Percy and Eunice Ebert, Bruce grew up in Joplin, Missouri alongside his aunt and three cousins, Charles, Cathy, and Janet. Bruce was like an older brother to his cousins and they remained a close-knit group throughout his life.
After graduating from Joplin High School, Bruce thoroughly enjoyed his four years at the University of Arkansas where he made lifelong friends in the Lambda Chi Fraternity. Nicknamed "Doc" by his Lambda Chi brothers, they continued to get together for reunions and had one planned this April before Covid-19 forced a cancellation. After graduation, Bruce went to work for Conoco Oil Company and while working in Tulsa, Oklahoma, he met the love of his life, Honore.
Like most men of that era, Bruce honored his ROTC commitment and when the Army called, Bruce answered. Ultimately, Bruce and Honore found their way to Texas where Bruce rejoined Conoco Oil Company in Fort Worth. At the insistence of his wife, enrolled in SMU Law School. After graduating from law school at the top of his class and an Editor of the Law Review, Bruce began his legal career. He was one of a handful of attorneys to open his practice in Northeast Tarrant County in 1969. Bruce built a successful practice in estate planning and probate and saw an opportunity to begin a consumer bankruptcy practice in the late 1970's. He was among the first attorneys to practice consumer bankruptcy law in Tarrant County. He added his daughter in law, Carey and with great pride, his son David to the practice before retiring to enjoy the fruits of his labor.
Bruce and Honore spent 61 years together before her passing in 2018. Their marriage brought them two wonderful children, David, and Stephanie. He loved David and Stephanie and took great pride in them and their families. He loved his four granddaughters, Taylor, Paige, Lauren and Tori. The girls enjoy many fond memories of their times with Pawpaw including family vacations, ski trips, making homemade donuts, and in his later years taking his granddaughters to lunch to hear about their work, life, and romances!
Bruce had many interests and passions throughout his life. He loved to call the hogs watching Razorback football, never saw a mountain that he didn't want to ski, never passed up the opportunity to eat or smoke some barbeque, garden, or plan his next port of call for a cruise or far away destination. Bruce loved many things such as a nice whiskey while smoking a good cigar, reading a good book, skiing, and especially traveling. He got involved in politics and was the only Republic Party Precinct Chair in Tarrant County to carry Barry Goldwater in 1964! Most importantly, Bruce was a man of faith and knew the redeeming love of his Lord and Savior. He and Honore joined St Vincent's back in 1969 when they moved to Euless and Bruce devoted his time, talent, and treasure to his church. He started the Chili Cook Off now known as the Family Festival back in the late 70's as a means of helping the youth group raise money for a ski trip to Colorado. He and his buddy Russ Rumney started the Chili Trot soon after to draw more people to the event. Bruce always said if you come out to eat chili, you might have the Chili Trot! Bruce served on the church Vestry and as Senior Warden, and even at the end of his life could be found putting up and taking down tables for events at the church. Bruce did not need to be asked, he just jumped in when he saw a need.
Bruce was a man of many talents. Bruce loved to smoke barbeque on his Oklahoma Joe smoker and give his briskets as gifts to neighbors and friends. His family often attributes their love of cooking to Bruce. He was happy with his apron on, spoon or knife in hand. One of his favorite things to do for his family was bake. He learned to bake at his mother's side as a young man, and his apple pie was State Fair blue-ribbon worthy. Everyone loved Bruce to bring a special dessert for any family get together. Bruce was a crisis manager and loved the time he spent as an Ambassador at DFW Airport. Every Monday would find him manning the International Arrivals desk helping tired passengers navigate their way to some local destination. He loved his community serving on the Euless Parks and Rec Board as well as a stint as Municipal Judge of Euless. Anyone who truly knew Bruce, knew he loved to "pinch a penny or two" including getting his ski lift ticket down to a dollar a run. However, he was always generous of his time and talents!
Bruce's travels ended on August 3, 2020 where he is reunited in Heaven with his loving wife, Honore. Well done faithful servant, friend, husband and father.
Preceded in death by his parents, his wife Honore and his cousin Cathy Walker Hallam Mechsner.
Survivors: his son David (Carey), his daughter Stephanie Hatch (Steve); granddaughters Taylor Ebert, Paige Ebert Lawson (Tyler), Lauren and Victoria Hatch; He is also survived by Charles and Kate Walker (Katie (Steinmetz), Kerrie & Lindsay), Kent and Janet Sohosky, Jarrod and Darlene Sohosky (Addison & Jenna), Kent and Tric Sohosky (Sophia, Robert & Claire), Jim and Lisa Hallam (Adam & Holly), Amy and Travis Langevin (Haley & Evan) and Tom Mechsner.