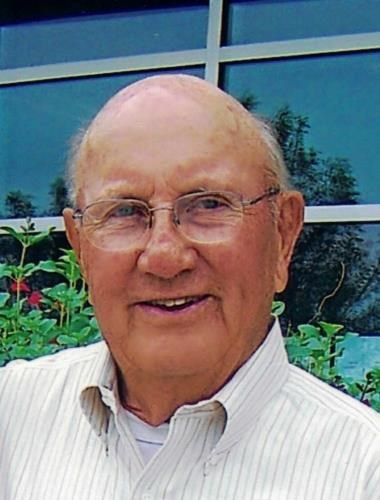 BORN
1931
DIED
2016
Royce Cullen Womble passed away on Wednesday, Nov. 30, 2016, after a battle with Alzheimer's. Service: 3 p.m. Sunday at Blessing Funeral Home. Interment: 9 a.m. Monday in Dallas-Fort Worth National Cemetery. Visitation: 2 p.m. Sunday before the service. Royce was a resident of Mansfield, and a wonderful brother, father, grandfather, and friend to all he knew. Royce was born in Webb on Aug. 12, 1931, second youngest of a family of six children. Known to friends as "RC," he grew up on a family farm, and explained he was never hungry, and always had what was needed. He never complained, even though his family suffered the loss of their father Cornelius when Royce was 4 years old. RC earned his way through college playing football at North Texas State University, and was inducted into NTSU's Ring of Honor in later life. World War II was winding down, but RC and several of his football teammates signed up to assist recovery efforts, and served four years in the Navy at Dallas Naval Air Station. After his military service, he tried out with the Baltimore Colts, where he played as wing back five years, and then one more year with the Los Angeles Chargers. He qualified for an NFL retirement, and maintained many friends around the NFL. RC saw the best in people and believed in hard work and solid families. He was positive and strong, and was a leader in every task he took on. He was a farmer, an athlete, a sailor, a coach, earned a master's degree in physical education, formed a small business partnership with two other partners, then eventually purchased Arlington Sporting Goods outright and incorporated, and with Jan's help ran the business for almost 40 years. He was a shrewd and fair business manager and exited the sporting goods business and bought a farm in Nocona to enjoy in retirement. He has a set of wonderful friends that joined him in his lifelong hobbies, including quail hunting, dove hunting, fishing and bird dogs. He was preceded in death by his son, Reed Merritt Womble. Survivors: He is survived by his loving wife, Janice; sisters, Robbie Lee Gilstrap and Betty Mitchell; his children, Brian and daughter-in-law Denise, Greg, Debbie Autry Turner, Robin Autry Alaniz and Bryan Autry; grandchildren, Julie Trkula, Scott Womble, Josh Womble, Krystal Arnold, Jimmy Christinidis, Shelby Moritz; and four great-grandchildren.
Published by Star-Telegram on Dec. 3, 2016.
To plant trees in memory, please visit the Sympathy Store.
MEMORIAL EVENTS
Dec
4
Service
3:00p.m.
Blessing Funeral Home
401 Elm Street, Mansfield, TX
MAKE A DONATION
MEMORIES & CONDOLENCES
Sponsored by the Star-Telegram.
9 Entries
So sorry to hear the news, rest in peace.
February 29, 2020
Janice, Brian, and Greg, I am so sorry to hear about Royce's passing.
I learned many life lessons from Royce while working at the store, the farm, (and maybe one or two playing on the ASG softball team.)
Lauren and I have such wonderful memories of Royce and your family which have come up regularly over the years.
There were Royceisms that Royce would quote that I still repeat today.
Knowing and working with Royce was truly a blessing in my life.
Kerry Nessler
January 17, 2017
It was a privilege and a pleasure to have known Royce. I could always depend on him when he was owner of Arlington Sporting Goods. He had a great sense of humor and knowledge from his experience and background as a player and businessman. He definitely was a good man.
Russell James
December 16, 2016
Janice - I am sad to hear the news about Royce. I always admired Royce and considered him a friend. It has been along time since the Arlington Sporting Goods days but I have fond memories about that time and place. Please accept my condolences.
John Burchfiel
December 6, 2016
Janice,
So sorry to hear of Royce's death, however, I know his quality of life was not what he wanted.
I know he and Jim Garrett are re-hashing fun times together.
He was a very nice man and touched so many lives.
I pray for peace and courage for you as you will miss going each day to visit him.
Prayerfully,
Becky Garrett
Becky Garrett
December 4, 2016
Janice and family, so sorry to learn of Royce's death. Prayers for PEACE and God's presence during this difficult time.
Anne Pearson
MMH Auxiliary
Anne Pearson
December 4, 2016
Only met Royce once but instantly knew what a fine gentleman he was. He will be missed by all and now he is with the angels.
Michael Koenig
Acquaintance
December 4, 2016
Fine gentleman. Sorry to read the news. My sympathies to the family.
Don Curry
December 3, 2016
Fine gentleman. Sad to read the news.
December 3, 2016
Showing 1 - 9 of 9 results