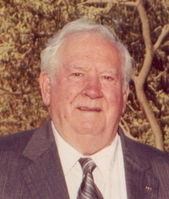 BORN
1924
DIED
2019
ABOUT
East High School
LeFebvre, Charles H.
1924 - 2019
Charles H. LeFebvre, passed peacefully on 29 June 2019 in Dayton Veterans Hospice. He was married to the former Nancy Dawley for 57 years who predeceased him. He is survived by his son, Steve and his wife, Betsy; grandson, Christopher LeFebvre; granddaughters, Julie Chaffey, Nicole Sanchez and Sara Tankersley; great grandchildren, Jaron and Jacee Chaffey and Jordan and Alec Sanchez. Charlie graduated from East High School and after World War II, returned to Columbus and began his own business, C.H. LeFebvre Electric. He graduated from ITT Tech, and parleyed his efforts into a successful career. He was a 32nd Degree Mason with affiliations with the York Lodge, Scottish Rite, Grand Chapter of Royal Arch, Columbus Commandery Knights Templar, and was a 20-year volunteer at the Shrine Temple. He was a Ham Radio operator, license K8DJX, and a founding member of the Brookwood Presbyterian Church. He served in the Navy from 1942 to 1945. He served in the Pacific in every major battle on the USS Sterett and survived a Kamikaze attack on 9 April 1945. He enjoyed his retirement at Dublin Retirement Village. He was a very social, loving husband and father. He will be laid to rest next to his wife, Nancy, at Forest Lawn Memorial Gardens, 10 AM Wednesday, July 3. In lieu of flowers, perform an act of kindness or donate to a veteran's organization. He will be missed.
Published by The Columbus Dispatch from Jul. 1 to Jul. 2, 2019.
To plant trees in memory, please visit the Sympathy Store.
MEMORIAL EVENTS
Jul
3
Burial
10:00a.m.
Forest Lawn Memorial Gardens
OH
MAKE A DONATION
MEMORIES & CONDOLENCES
Sponsored by The Columbus Dispatch.
5 Entries
Fair winds and following seas shipmate. Thank you for preserving and strengthening the Dauntless spirit of the USS Sterrett and passing her down to the generations. We have the watch.
Brian Holladay
July 3, 2019
On behalf of the members of the USS Sterett Association, please accept our deepest condolences on your loss.
We were honored and thankful for Frenchy's attendance at the Sterett reunions over the years. He never tired telling stories and we never tired of listening.
He was a great ambassador for the Greatest Generation. We will raise a toast in September in memory and sorrow.
In sailor parlance, he has crossed the bar to Fiddler's Green where his WWII shipmates are waiting.
Steve Hayes
July 2, 2019
Sorry for your loss. Remember the good times and he will always be with you. Bruce EM class of 66
July 2, 2019
Steve and family,
My thoughts and prayers are with you in your time of grief.

Sharon Butcher
July 2, 2019
Steve and Betsy,So very sorry to hear that Charlie passed away. Jeff and I send our heartfelt sympathy. He was a Card for sure. He and Chris had a special relationship and I know Chris will cherish those memories. Cheri and Jeff Brandt
Cheri and Jeff Brandt
July 1, 2019
Showing 1 - 5 of 5 results