Edward Joseph McFarland
FUNERAL HOME
Egan-Ryan Funeral Service
403 East Broad Street
Columbus, OH 43215
McFARLAND Rev. Msgr. Edward Joseph McFarland, died on Saturday, January 8, 2011 at Mother Angeline McCrory Manor. The son of Carl C. and Marie Moore McFarland, he was born in Columbus, Ohio on April 10, 1929. He graduated from Immaculate Conception School, Columbus, St. Charles High School and College, Mount St. Mary of the West Seminary, Norwood, Ohio and did graduate studies in Education at Catholic University of America, Washington, D.C. He was ordained to the Priesthood May 28, 1955 by the Most Reverend Michael J. Ready. In 1992 he was named Monsignor when His Holiness, Pope John Paul II, bestowed upon him the title Prelate of Honor. Monsignor McFarland serve as assistant pastor at St. Vincent de Paul Church, Mt. Vernon (1955-56); St. Peter Church, Chillicothe (1956-60). He served as Principal of Newark Catholic High School and Assistance Pastor at St. Francis de Sales Church, Newark (1961-65); Principal of Bishop Rosecrans High School and Assistant Pastor at St. Nicholas Church, Zanesville (1965-66); Assistant Principal of Bishop Watterson High School (1966); Principal of Tuscarawas Central Catholic High School (1966-69); Principal of St. Joseph High School, Dover and St. Mary High School, Dennison (1969-73); Principal of St. Francis de Sales High School, Columbus (1973-79). He was most grateful to have been a full time Priest/Principal in the Diocese. He served as Pastor of St. Pius X Church, Reynoldsburg (1979-90) and St. Matthew the Apostle Church, Gahanna (1990-99) when he retired. Throughout his active ministry, he served the Diocese of Columbus on several advisory boards and committees. During his retirement, he assisted at several parishes, most recently at Our Lady of Peace Church, Columbus. Friends may call Wednesday 2-4 p.m. at EGAN-RYAN FUNERAL HOME, 403 E. BROAD ST. Monsignor McFarland's Body will be received at Our Lady of Peace Church, 20 E. Dominion Blvd., Columbus Wednesday 7 p.m., where friends may call from 7-9 p.m. and on Thursday from 10:30 a.m. until the funeral Mass, which will be celebrated at 11 a.m. Bishop Frederick F. Campbell will be the principal celebrant, Bishop James A. Griffin will concelebrate and Monsignor John G. Johnson will offer the homily. Interment at St. Joseph Cemetery will take place after a luncheon following the funeral Mass. Friends who wish may contribute in Msgr.'s memory to the St. Vincent de Paul Society at Our Lady of Peace Church.
To plant trees in memory, please visit our Sympathy Store.
Published by The Columbus Dispatch from Jan. 9 to Jan. 12, 2011.
MEMORIAL EVENTS
No memorial events are currently scheduled.
To offer your sympathy during this difficult time, you can now have memorial trees planted in a National Forest in memory of your loved one.
Funeral services provided by:
Egan-Ryan Funeral Service
MEMORIES & CONDOLENCES
22 Entries
U will be sadly missed but greatly remembered..monsignor.
Amber Knapp
May 1, 2011 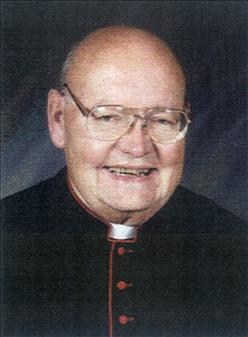 January 14, 2011
You will never be forgotten Msgr.
January 12, 2011
In loving memory of a wonderful person. We will love you and miss you always.
Bob and Lois Finkel
January 12, 2011
Msgr McFarland, Father McFarland back in my day when he served as Assistant Pastor at Saint Peter's Church in Chillicothe, Ohio. I fondly remember Fr McFarland and remember him teasing me and another classmate relentlessly.
That was back when the whole school would attend Mass and then go back to school and have breakfast. He would either steal our jelly donuts or buy us a jelly donut...can't remember which...it's been a lot of years ago, but it was probably buy us a jelly donut.

I also remember a time the school had gone to confession during school time and when I returned home my Mom told me we were going to confession. I tried to explain to her that I'd already been, but she made me go anyway. I go in and go through the "Bless me Father for I have sinned" routine, and I hear this bellowing deep voice say "Rita, is that you? I just heard your confession earlier today...why are you back? I replied my Mother wouldn't believe me and made me come with her. He laughed and gave me my penance.

May you rest in eternal peace my friend.

Kenny & Rita (Senff) Kern
Rita Kern
January 12, 2011
I only had the priveledge to meet Monsignor on two maybe three occasions. I found him to be a very witty, funny, ornery, enjoyable character. He told me I better take care of my wife and treat her right because she is a handful and he would be watching, then he winked. I liked and respected him immediately.

My wife considered him a confidant, role model, teacher, and most of all a friend and member of the family. It was obvious to me he touched her and her family in the faith all the while instilling a bit of fun ornery in the mix.

I am thankful for his influence as well as his lasting impression on my wife and her family. He was truly a man of God.

My you rest in peace, as my wife would say, "old friend."
G Moore
January 11, 2011
Father McFarland was a dear friend and advisor to me for many years. He officiated my marriage and will always hold a spot in my heart. I was saddened to hear that he passed, but know that he's in a much better place than we are now, and he's looking down rooting us all on.
Lauri (Parman) Ortega
January 11, 2011
Msgr. "Eddie Joe"...Did Marie meet you in heaven? The stories you told about her, bet she had some words for you. Was easy to work for you...Thank you and God bless
Louise Van Balen
January 11, 2011
Msgr. McFarland was a kind and caring friend who will be deeply missed. He said he felt blessed to be considered as part of our family, when in truth, we felt blessed that he considered us as part of his. We always made sure to call each other whenever John Wayne movies were playing on television. You will always be in our thoughts, in our hearts, and in our prayers. Be at peace M.S.A. Enjoy your cigar and martini.
Paul,Carla(S.A.),Alex and Daniel Gray
January 11, 2011
Father McFarland took a personal interest in the future education of Newark Catholic students. He arranged for me meet to a representative of Catherine Spalding College, Louisville, KY who was in the area. I applied and was accepted to Spalding's excellent baccalaureate in nursing program and was graduated. The success I had a Newark Catholic and at Spalding were building blocks for the rest of my education. Thank you Father Mac!
Cathy Frazee Beattie
January 11, 2011
Monsignor McFarland was "Father Ed" to me. He was there for me at a very low point in my life and remembered me years later. He will always hold a special place in my heart.
January 11, 2011
I have known Msgr. McFarland for many years and set up for Mass for him on Sundays at 11:30. I enjoyed his teasing in the Sacristy and his jokes. I was also priviledged to bring him Communion at Mother Angeline McCory Manor on a weekly basis. He was most grateful each time. He will be missed by a lot of friends. Rest in Peace, Father. You deserve it.
Sister Barbara Kolesar
January 11, 2011
I joined the church in 1997 at St. Matthew.... I was so scared for my first confession because there were things in my past that really were haunting me. Monsignor McFarland was wonderful... I did a face to face confession with him and the tenderness and mercy that he extended to me was outstanding. He was a good man and I will always remember him and pray for him.
January 11, 2011
May you rest in peace Mons. We will always be thanlful of your presence in con-celebrating our marriage here in Philadelphia. Mr&Mrs Felix Maietta, Philaelphia, Pa.
Felix Maietta
January 11, 2011
Monsignor McFarland was an inspiration for our entire family. He challanged us to be better individuals and touched us with his insight and humor. Our daughter always enjoyed serving when the monsignor said mass - He will always be remembered
The Krause's
January 10, 2011
Monsignor McFarland will be greatly missed by our family as well as the countless others whose lives he has touched. Such sorrowful news to hear of ones passing especially someone who's as special as he was. He will never be forgotten even when our hearts stop wheeping.
Mark Hawkins & Family
January 10, 2011
To have had the privilege of knowing Monsignor McFarland was a true honor. He will be missed but Heaven has claimed another Angel for the throne of God. Thank you Lord for giving us such a kind and gentle man to serve and teach your words of faith. Many times Father McFarland (as I knew him then) would have talks about the ethics and philosophy of religion. One quote he inspired in me to remember was : "If any man seeks for greatness, let him forget greatness and ask for truth, and he will find both"(Horace Mann). Thank you Father Mac (Chopper) for your wisdom and kindness.
Until we meet again in Heaven-God Bless.
Angela Granata
DeSales Class of '78
Angela Granata
January 10, 2011
I grew up with Father McFarland (Eddie) -he had the best 4th of July fireworks every year, he litterly ran the Clinton Theater as an usher for several years keeping all of us kids under control on friday nites, his ambition as a student at St. Charles was to become the first Irish Pope (tongue in cheek) and he addressed our Christmas cards to Luthers boys and girls - quite a guy and I am happy that he was a part of my growing up - that are many other stories from that B righton Road-Hennipen intersection - God Bless Harry (Bud) Gardner

t
January 10, 2011
My wife and I and our two daughters have had the blessings of Monsignor McFarland's ministry at Saint Matthew the Apostle, and his continuing friendship during his retirement. We have lost a talented and dedicated priest, and a wonderful man. His wry wit was still sharp and his smile still ready until the very end. God bless you, Mac.
Andrew Sonderman
January 10, 2011
We're very sorry to lose Monsignor McFarland and look forward to being ribbed by him in Paradise one day.
The Davissons
January 10, 2011
Msgr. will be deeply missed at OLP. We always look forward to his wonderful stories during mass, many a time putting smiles on our faces. I think we will remember Msgr. McFarland especially during the Lenten season. We can all hear the words he conveys every Lent..."Be better today then you were yesterday." Our condolences to his friends and family at OLP.
The Bakles
January 9, 2011
Offering our deepest condolences during this difficult time.
The Families and Staff of Egan-Ryan Funeral Home
January 9, 2011