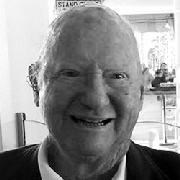 FUNERAL HOME
Serenity Funeral Home & Serenity Gardens Memorial Park
13401 Indian Rocks Road
Largo, FL
Konold Dr. George E. Konold, D.O., 84, died on April 12, 2014, from cardiac arrest following a partial foot amputation due to Type 2 Diabetes. George always had a smile on his face and joke to tell. His best quality was that he always made people feel good. Not just because he was a doctor, but also because he was an optimistic person who always had something nice or funny to say. Perhaps it's because he loved God and enjoyed spreading joy. He sang in the church choir as a boy and was a member of three Episcopal churches, where he served as lay reader and on the charter Vestry of St. Edwards in Columbus, OH. George was born March 15, 1930, in Warren, OH, the youngest of three children. He attended Bowling Green State University and graduated with one degree in Spanish and another in Chemistry. He received his medical degree from the College of Osteopathic Medicine and Surgery, in Des Moines, IA, and graduated tops in his class. He interned at Doctors Hospital, where he rose to Chief of Staff and served on the Board of Trustees, and had a pleasant family practice on E. Main St. in Bexley, OH. He served as team physician for Eastmoor High School for 15 years where he had watched Archie Griffin blossom into a great tailback. He actually wrote a letter to Woody Hayes, then coach of the Ohio State Buckeyes, to suggest he take a look at Archie. He was at Ohio Stadium, having served as a portal usher in 11C for over 25 years, to see Archie's two Heisman award-winning seasons. He was a Rotarian and belonged to all Masonic Bodies including the Eastern Star, and enjoyed being a Shriner and helping children. He loved golf and was a member of four country clubs. His wife, Buddy, turned him on to golf thanks to a grocery store promo giving away free clubs. It quickly became the family game, and has been ever since. He was a master gardener and grew "award-winning tomatoes." He loved to fly planes, having earned up to his instrument's license, and was a senior aviation medical examiner for the FAA. He was preceded in death by his high school sweetheart and wife of 50 years, Angeline "Buddy" Scarpaci Konold of Warren, OH, his parents George and Elizabeth, his sister Betsy, his brother-in-law James Reynolds and his brother-in-law Paul Yannacey. He is survived by his sister, Kate Reynolds; his beloved companion, Sally Donnor; three sons and daughters-in-law, George and Sharon Konold of Pinellas Park, FL, Bob Konold and Lisa LÃ³pez of Western Springs, IL, and Dan and June Konold of Canal Winchester, OH; former daughter-in-law, Becky Konold of Columbus, OH; seven grandchildren, Brittany Perniciaro (Jordan), and Stephanie, Victoria, Alexandra, Anthony, Anna and Sara Konold; step-grandchildren, Brandy Diehl (Todd), Shane Wolfe (Jessica); great-granddaughter, Angelina Konold; and six step-great-grandchildren. He will be interred beside wife Buddy at Calvary Episcopal Church, 1615 First Street, Indian Rocks Beach, FL 33785, after a 10 a.m. memorial service on Saturday, May 3. In lieu of flowers, contributions may be made to Central Ohio Diabetes Association in his name, 1100 Dennison Avenue, Columbus, OH, 43201, where he once served as their Medical Director.