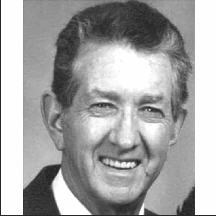 FUNERAL HOME
Schoedinger Funeral Home Worthington Chapel
6699 North High Street
Worthington, OH
GRIDLEY John Palmer Gridley, age 82, finished his earthly race on Tuesday, January 3, 2012. "Let us run with perseverance the race marked out for us" Hebrews 12:1. Born at home in Aurora, Indiana on Sept. 11, 1929, he was preceded in death by parents John C. and Grace M. Gridley, sister Gloria Kollmorgen and niece Erin Zakanycz. Survived by his wife of 58 years, Barbara; daughter, Pamela (Joseph) Snelling; grand-sons, Scot (Brandy) and Kevin Snelling; step-grandchildren, J.J. and Jamie Snelling; nephew, Edward Duff (Charlotte) Byrnside; niece, Julie Brown; and brother-in-law, Martin (Jo) Kollmorgen. John graduated from Ohio Military Institute, attended Miami (Ohio) University, served in the Air Force and was stationed at Eglin A.F.B. in Pensacola, Florida, where he met his future wife on a blind date. They married before he was deployed to Okinawa, Japan. John was retired from AEP Tanner's Creek, but continued to work, last employed in the seafood department at Meijer in Lewis Center for the past 13 years. John was a member of Powell United Methodist Church, where he and Barb had been active in clown ministry. His interests were the Cincinnati Reds and Bengals, and everything related to golf. He loved people and never met a stranger. Visitation will be held at SCHOEDINGER WORTHINGTON CHAPEL, 6699 N. High St., Columbus (Just south of I-270) on Friday, January 6, 2012 from 4-7 p.m., where the funeral service will be held Saturday at 9:30 a.m. Rev. Larry Brown, celebrant. Many thanks to John's golfing buddies, especially Art, his neighbors, and his friends from church for their prayers, companionship and offerings of food and to Meijer pharmacy for their caring attitude. Special thanks to Brian, Susie and Kathy at HomeReach Hospice for their invaluable help during John's final days on Earth. Contributions may be made to HomeReach Hospice, c/o Ohio Health Found., 180 E. Broad St., Columbus, OH 43215 or Powell United Methodist Church, 825 Olentangy St., Powell, OH 43065. To share memories of John, visit www.schoedinger.com.
Published by The Columbus Dispatch from Jan. 4 to Jan. 6, 2012.
To plant trees in memory, please visit the Sympathy Store.
MEMORIAL EVENTS
To offer your sympathy during this difficult time, you can now have memorial trees planted in a National Forest in memory of your loved one.
Funeral services provided by:
Schoedinger Funeral Home Worthington Chapel
MAKE A DONATION
MEMORIES & CONDOLENCES
3 Entries
To the Gridley Family;
My prayers are with you and I too feel the loss. John and I used to talk whenever we attended a funeral of another family member, I would fly in from Florida and John would drive down from his home to represent our side of the family, we both knew our time would come sooner or later, I had cancer at the time and we would wonder who would beat who. I wish it could have been the other way but God has a plan for all of us. I will miss him, he was a good man. So. till we meet again John, may you be at peace.

Dan and Doreen Gullett
Dan Gullett
January 31, 2012
It was very sad to hear that John had passed away. We shared a lot of great times together at I&M and worked many hours together. John was always fun loving and really cared about other people. He always had many stories that he shared with us about his life. His family and his faith were the most important things in his life. May he rest in eternal peace. P.G. Gentrup, Rising Sun, IN
PG Gentrup
January 13, 2012
To the Gridley Family,

John was such a special and wonderful person. May you feel God's arms around you through such a difficult time. His love will be with you always.