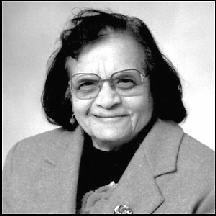 FUNERAL HOME
Rutherford Funeral Home at Powell
450 West Olentangy Street
Powell, OH
RAJADHYAKSHA Kasturi Rajadhyaksha, 86, passed away on Sunday, February 7, 2010. Popularly known as Dr. Raja, she was a physician from India. She also earned a Master's in Public Health from Johns Hopkins University. She was involved in community and charitable work in India from 1945 to 1969 and in the U.S. from 1970 to 2010. She traveled and developed health programs in 20 countries in Asia and the Middle East. She was one of the founders of ASHA/Ray of Hope, a nonprofit organization helping victims of domestic violence in the South East Asian community. She was also on the Board of Trustees for the Asian American Commerce Group. In 2008 she was inducted into the Ohio Women's Hall of Fame, 1995 into the Senior Center Hall of Fame and received Most Distinguished Physician Community Service Award from the National Association of American Physicians of Indian Origin in 2003 and the YWCA Women of Achievement award in 1996. She was preceded in death by her husband Vithal Kashinath Rajadhyaksha. Survived by her sons, Vikram (Janet) and Pratap (Kim); and her grandchildren, Jennifer, Nicole, Ram and Shyam. Memorial service will be held at 6 p.m. Thursday, February 11, 2010 at RUTHERFORD FUNERAL HOME AT POWELL, 450 West Olentangy St., (Powell Rd./St. Rt. 750/ 1/4 mile east of Sawmill Pkwy.), Powell, OH 43065, where the family will receive friends from 4-6 p.m. before the service. The family requests that, in lieu flowers, donations be given in the memory of Dr. Raja to the Mid-Ohio Food Bank, 3960 Brookham Dr., Grove City, OH 43123. Condolences may be sent to www.rutherfordfuneralhomes.com
Published by The Columbus Dispatch from Feb. 8 to Feb. 10, 2010.
To plant trees in memory, please visit the Sympathy Store.
MEMORIAL EVENTS
To offer your sympathy during this difficult time, you can now have memorial trees planted in a National Forest in memory of your loved one.
Funeral services provided by:
Rutherford Funeral Home at Powell
MAKE A DONATION
MEMORIES & CONDOLENCES
Sponsored by The Rajadhyaksha Family.
10 Entries
Dr, Raja used to visit in Annapolis when she was in Baltimore. We always admired her for coming to Johns Hopkins University and completing Master's in Public Health. Her son Vikram was my classmate at IIT and we used to get together often in Annapolis and in Mumbai, but lately we had lost touch. Our thoughts and prayers are with the familty.

Vijay & Chhaya Kulkarni
Vijay Kulkarni
February 15, 2010
Our thoughts and prayers are with you in your time of grief. May your memories bring you comfort.
LEENA & RASHMI YAJNIK
February 11, 2010
No bond is as great as that between a parent and child. Our deepest condolences are with you as you grieve.
LEENA & RASHMI YAJNIK
February 11, 2010
I would like to extend our deepest sympathy to your family. She was a great woman and a mentor to us all.
Wanda Dillard
February 11, 2010
Condolences to the family of Dr. Raja. I was a colleague, but more importantly a strong admirer of her character and kindness. She left her mark on many, including me. I am better because of her. God bless you.
Iris Cooper
February 11, 2010
Shyam and family - I am so sorry for the lost of Dr. Raja. Her passing is truly a loss to our community. My deepest sympathy goes to you and your family at this difficult time. Please be strong.
Wentong Lin
February 11, 2010
february 11,2010

She left this earth a better place
Barbara ,Walter Samantha Gale
Walter Gale
February 11, 2010
Ram and family, so sorry to hear your grandma passed, but she certainly led a fruitful life helping others. She felt like part of our family in the Larrimer days. Linda Scharp (Ben's mom)
February 10, 2010
I'm so sorry to hear about Dr. Raja. I remember her coming into work and always being very friendly and having a big smile on her face. She will be sadly missed.
Mary Powell
February 10, 2010
We would like to extend our deepest sympathy to your family. You have lost a very dear loved one and the community has lost a caring and accomplished individual.
Clark & Dee Harmon
February 9, 2010
Showing 1 - 10 of 10 results