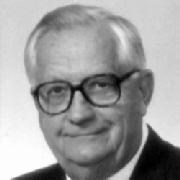 FUNERAL HOME
Schoedinger Funeral and Cremation Service - Northwest Chapel
1740 Zollinger Road
Columbus, OH
Barthelmas Ned K. Barthelmas, age 87, passed away on May 16, 2015. Resided upon death at First Community Village. Born and raised in Circleville, where in March of '14, he received the Hall of Fame award, attended UCLA and later OSU with a BS degree in Bus. Adm. in 1950. Served in the Infantry and the Adj. General's Dept. of the U. S. Army in the mid-forties. Survived by his wife of 63 years, Jane Livezey Barthelmas; son and daughter-in-law, Dick and Beth Barthelmas; daughter and son-in-law, Ann and Marv Larger; five grandchildren, Phil Larger, Ashley Zimmerman (husband, Lars Zimmerman) of Breckenridge, CO., Stephen, David and Michelle Barthelmas, all of Columbus; sister, Marilyn Wise of Circleville; and many nieces and nephews. After graduating from OSU where he was Pres. of the Commerce College Council and a member of Phi Delta Theta, he worked several years with GE and Glidden Co. before entering the securities business in 1953 with the Ohio Co. Five years later he formed First Columbus Securities Corp. and was Pres. and majority owner until 1975. He was founder, owner and Pres. of First Columbus Realty Corp. which developed and owned com. and ind. real estate and shopping centers from 1960 to present. Served on some two dozen Boards of Directors and was voted by Business First as one of the Top 25 Corporate Directors in Central Ohio, and by Ohio Citizen Journal as one of the 10 Outstanding Businessmen in Columbus. Was Director, Underwriter, and/or Financial Adviser to such firms as Worthington Ind., Bank One, Buckeye Steel, Lancaster Colony, Liebert Corp., White Castle, Medex, National Foods, Eastern Bankcorp, Nationwide, Majestic Paints, Galbreath Real Estate Trust, Marzetti's and Armac Enterprises (back then the largest maker of pool tables) with Minnesota Fats as a co-board member. Was a past full member of the New York Stock Exchange (serving on their Ethics Committee), the American Stock Exchange, and served as past Board Member and Pres. of the Ohio Stock & Bond Broker's Assoc., Dist. Bd of the Nat'l Assoc. of Security Dealers (v-chair), the Investment Bankers Assoc., and, The Nat'l Stock Brokers Assoc. (Past Pres.). Past Pres. of the Columbus Young Pres. Org., Past Pres. and Director of Columbus Jr. CC, YMBC, and Past Trustee of Columbus Area CC. Voted into Exec. Hall of Fame by the World Pres. Org., Past Trustee of the Exec. Club of Columbus and Columbus Area Growth Foundation. Listed in seven different editions of Who's Who including, Who's Who in Corporate Real Estate, Who's Who in America, Who's Who in World, Who's Who in the 21st Century, and Winston Churchill's Wisdom Hall of Fame. Past member of the Bd of Dir of a number of charities including Boy Scouts, Columbus JC Youth Foundation, Kiwanis Club (Legion of Honor), Community Redevelopment Council (Past Pres. & Dir.) co-founder of United Way Pacesetters' Club, and, others. Past Vice-Chair. and member Board of Trustees of First Community Church, First Community Retirement Village and founder of the Barthelmas Charitable Fund of the Columbus Foundation, which recently reached its goal of $1 million which will be distributed over the ensuing years to needy charitable causes. Currently member of Intl. Society of Financiers, the Intl. Real Estate Institute, IREM, the Council of Ethics in Economics, the World Pres. Org., Columbus Pres. Org., Council of Org. for American States, American Legion, Columbus Admiral's Club, the Pres. Council of the Heritage Foundation, the CATO Institute, and Broad Street Presbyterian Church. Was also a charter member of the Nat'l. World War II Museum. He was a member of the Pres. Club of OSU, Scioto Country Club, the Columbus Club, Crystal Downs Country Club of Frankfort, MI, the Wrigley Mansion Club of Phoenix, AZ, and the OSU Faculty Club. He was an itinerant world traveler having visited all seven continents and 66 countries thereon. He visited six of the Seven Wonders of the World and all three of the largest waterfalls. Upon written request of the deceased to his family there is to be no funeral or service of memory. He states that he wishes to be cremated and his ashes spread among the wild flowers in the woods behind the tennis court of his beloved Michigan summer home. Donations in his memory can be made to the Barthelmas Charitable Fund of the Columbus Foundation, 1234 E. Broad St., Columbus, Ohio 43205. Family has entrusted SCHOEDINGER NORTHWEST CHAPEL with Ned's final arrangements. To share a favorite memory with the family, please visit www.schoedinger.com.

Published by The Columbus Dispatch from May 19 to May 24, 2015.
To plant trees in memory, please visit the Sympathy Store.
MEMORIAL EVENTS
To offer your sympathy during this difficult time, you can now have memorial trees planted in a National Forest in memory of your loved one.
Funeral services provided by:
Schoedinger Funeral and Cremation Service - Northwest Chapel
MAKE A DONATION
MEMORIES & CONDOLENCES
10 Entries
I worked for Ned at First Columbus and through the mid-70s when he downsized. I have a lot of great memories of that time. Miss the morels, too. Diana Short

October 31, 2018
this is to man who larger than life. May the lord be with you and your family through this tough times.
heather balcom
June 12, 2015
Mr. Ned was always a pleasant person to take care of. I have spent over three months every Friday until he went into the hospital taking care of Ned. Ned had stories to tell that made me laugh and admire him. I will miss Ned and lots of prayers to his wife Jane.
Heather Balcom
June 12, 2015
My Dad, H. Laird McGregor, and yours knew each other many years ago through YPO. And as a coincidence we were at OWU together. Your father was such an accomplished man-larger than life!
Please know you and your family are in my thoughts as you learn to cope with your great loss. Fathers and daughters share a very special bond.
Laurie McGregor Connor OWU '77
May 25, 2015
"During all their distress it was distressing to him...In his love and compassion...he lifted them up and carried them all the days of old." (Isaiah 63:9) Please know that our Heavenly Father knows the pain you feel and promises to carry you through this distressing time.