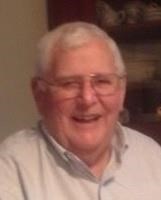 FUNERAL HOME
Foster Funeral Home
410 Main St.
Huron, OH
Stark, Paul
Paul Stark passed away on December 27, 2017 of complications from a brief illness, exacerbated by the hopeless condition of the Cleveland Browns, at Stein Hospice, Sandusky. A proud native of Mansfield, Ohio, he lived for more than 30 years in Columbus where he and his wife, Susan, raised their family. He spent his later and happiest years in his adopted home town of Huron, Ohio. A graduate of Mansfield High School, Paul remained a lifelong Tygers' fan. His amazing work ethic and natural mathematical gifts led him to a career as a surveyor, spending most of his career with Kokosing Construction Co. Paul was a devoted and loyal husband, father, grandfather, friend, coworker and neighbor. He is survived by his beloved wife of 52 years, Susan; children, John (Dana) Stark of Sunbury, OH, Tom (Tammy) Stark of Loganville, GA and Molly Stark of Westerville, OH; grandchildren, Tyler, Cole, Shadrach, Jada, and Magdalena; a brother, Jim (Sandra) Stark of Rome, GA; a sister, Mary (Jerry) Wharton, of FL; and several nieces and nephews. He is preceded in death by his parents, Robert & Jacquelyn (Hamlin) Stark. Paul passed just before the Browns were prepared to turn the corner but had many well-earned blessings. Paul believed in paying it forward, and the goodwill he leaves behind will endure long after he's gone. Paul requested no funeral service, but a celebration of his life will be held at a later date to be determined. In lieu of flowers, donations may be made to The Friendly House of Mansfield, 380 N. Mulberry St, Mansfield, 44902; Stein Hospice Services, 1200 Sycamore Line, Sandusky, 44870; or to Victory Kitchen 1613 Hayes Ave, Sandusky 44870. Online condolences may be shared at www.fosterfh.com. Foster Funeral Home & Crematory, Huron, is handling the arrangements.
Published by The Columbus Dispatch from Dec. 28 to Dec. 29, 2017.
To plant trees in memory, please visit the Sympathy Store.
MEMORIAL EVENTS
To offer your sympathy during this difficult time, you can now have memorial trees planted in a National Forest in memory of your loved one.
Funeral services provided by:
Foster Funeral Home
MAKE A DONATION
MEMORIES & CONDOLENCES
Sponsored by The Columbus Dispatch.
11 Entries
Has a celebration of life service been scheduled as of yet?
Frank Quinn
February 16, 2018
I don't have any contacts in Paul's circle of friends so I just now heard about his passing. He was in charge of surveying for Kokosing Construction Co. and I was a construction surveyor working for him. He was an extraordinary boss for 10 years and remained a very close friend of mine for the rest of his life. I am truly sorry for your loss and I will miss this great human being.
Randy Koski
January 16, 2018
Just today I heard about Paul-we were good friends in high school and a few years after. In fact he was a usher in our wedding. He sent me a email back in Sept. asking how I was , never got back to him-wasn't doing well at the time so sorry I didn't get back to him! God's blessing on his family. He was one of the very best
Dick Frederici
Friend
January 12, 2018
01/03/18
Marina and I are sorry for your loss. We saw the article in the Dayton Daily News. I first met Paul in Mansfield when we both worked for Holderman Construction on the Rte. 30 Bypass. He was a very good friend.

Ward Johnson
Lewisburg,Ohio
Ward Johnson
January 3, 2018
Susie, Molly, and Family, Very sorry for your loss of Paul. He was a very dear man. Spoke to him over a month ago, and he told me he was praying for everyone. He will forever hold a special place in my heart.
Mike Raynack
January 2, 2018
Sorry for the loss of your loved one.
I hope that your memories will bring joy during
This time. May God comfort your heart
And give you peace. 2 Thessalonian 2: 26-17.
January 2, 2018
May the hope of seeing your dear loved one again in paradise help you through these difficult days.
January 1, 2018
I am sorry for the loss of your loved one Paul there are some very cmforting words I found hope they. Bring you the comfort they brought me.love Rachelle and family
December 30, 2017
Susie, just saw the photo of Paul with the caption of "Brown Fan gets last Laugh" on channel 3 news at 6p.m.. I had to smile at the opening statement. Connie and I wish to extend our condolence to you and your family along with our prayers.
Dann Marble
December 29, 2017
Paul aka Boss was indeed a special friend!!!! He became a dear friend while building Clintonville Academy with so many wonderful friends!!!
The group of special guys enjoyed not only building the Academy, but fun fishing trips, fun Monte Carlo nights at Clintonville Academy, parties at each other's homes, and having SOS every Saturday morning at the CARWASH, which was one of my Chuck's favorite moments in life!!!
I know you are in heaven, dearest Paul, with your good friend, Chuck!!!
Susie, you and your family, are in my heart and prayers. I was blessed when you and Paul came into my life!!!
Love from Rosie!!!!
Rosie Blake
December 29, 2017
I am so pleased that Paul and I were able to resume our friendship after a few years of retirement. Paul was a "class act". I'll miss him.
Joe McDaniel
December 29, 2017
Showing 1 - 11 of 11 results