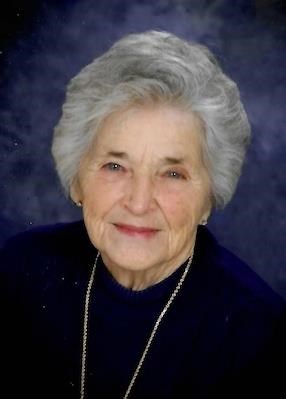 Mary attended Rosemont (forerunner of Margaret Allen School) and Central High School. She was exceptionally proud of her connection to Central, serving as a class representative (1942) for many years to the Central High School Alumni Association.

Mary married George F. Kersey on January 29, 1944 in Biloxi, MS. George was in Biloxi training for the Air Corps while in the US Army. The newlyweds lived in Charleston, SC before he deployed to Italy for military service. When George was discharged in 1945, the couple moved to East Nashville. Their first son - George F. Kersey, Jr. - was born in 1946, and a second son - John Clayborne Kersey - followed in 1947. Both sons survive.

In 1948 the Kersey family moved to LaVergne, TN when George and Mary, along with another couple, purchased the LaVergne Telephone Exchange. Mary was a switchboard operator and business manager for the telephone company.

The family moved from their LaVergne home in Rutherford County to a new home just across the border in Davidson County in 1956. Mary's husband died in 2010, and she continued to live in their home until the last week of her life.

Mary identified herself as a lifelong Methodist and established connections with three congregations over her lifetime: Arlington Methodist, Antioch Methodist, and McKendree United Methodist. At Antioch and McKendree she served in a variety of roles including Sunday School teacher.

Mary and her family gratefully acknowledge the doctors who have served her: Dr. Tracey Doering, Dr. Jim Daniel, Dr. Robert Stein, Dr. David DeBoer and his PA, Dr. Albert Kattine, and Dr. John Baese. The family also appreciates the care Mary received from caregivers provided through Right at Home, especially the attention she received from Mrs. Mamie Burleson. In her final days Mary and her family were supported by the staff at Alive Hospice.

In light of the pandemic, Mary's funeral service and interment will be private. In late summer or early fall a celebration of her life will be held at Antioch United Methodist Church. Since there will be no public visitation, the family respectfully requests NO FLOWERS PLEASE. Instead, those wishing to honor Mary may make donations to Antioch United Methodist Church, 41 Tusculum Road, Antioch, TN 37013.


To plant trees in memory, please visit our Sympathy Store.
Published by The Daily News Journal from Apr. 13 to Apr. 15, 2021.
MEMORIAL EVENTS
No memorial events are currently scheduled.
To offer your sympathy during this difficult time, you can now have memorial trees planted in a National Forest in memory of your loved one.
Funeral services provided by:
Woodbine Funeral Home- Hickory Chapel
MAKE A DONATION
MEMORIES & CONDOLENCES
Sponsored by Woodbine Funeral Home- Hickory Chapel.
1 Entry
I was in Mr George Kersey’s 5th grade class at Glenview Elementary. He was my all time favorite teacher. Condolences to him and all the family.
Sandra Towry Clendenon
Acquaintance
April 14, 2021
Showing 1 - 1 of 1 results